Much of the West overall is a tinder-box, which means even the smallest spark could ignite a catastrophic wildfire. 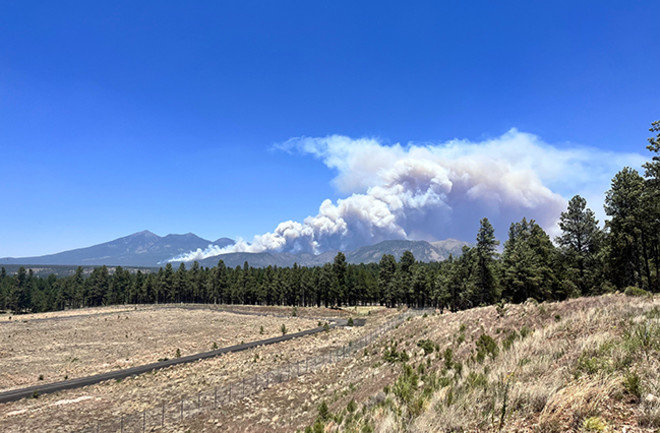 Windblown smoke from Arizona's Pipeline Fire, blazing just six miles north of Flagstaff, is seen in this photo taken on Sunday, June 12, 2022. The smoke has blown into Colorado, where it has caused air quality issues on Monday. Smoke is forecast to stream all the way to the Great Lakes. (Credit: InciWeb)

What may have started as a small wad of burning toilet paper has exploded into a dangerous wildfire near Flagstaff, Arizona that has sent smoke streaming across hundreds of miles.

The blaze, known as the Pipeline Fire, began on Sunday, June 12. As of mid-day on Monday, the fire had grown to at least 5,000 acres, fanned by warm, dry, gusty winds.

NASA's Terra satellite captured this image of the smoke plume from Arizona's Pipeline Fire, with contributions from a nearby smaller blaze, the Haywire Fire, on Monday, June 12, 2022. (Credit: NASA Worldview)

By recent wildfire standards, 5,000 acres is not huge. Even so, by Monday morning the blaze was already being felt far afield, thanks to a plume of smoke that had blown all the way to Colorado's Front Range. There, it left skies hazy and caused air quality monitors to register spikes of fine particulate pollution.

By Wednesday, winds are expected to carry some of the smoke to an area north of the Great Lakes, some 1,800 miles away.

Smoke from Arizona's Pipeline and Haywire fires is forecast to blow across 1,800 miles by Wednesday, June 15, 2022. (Credit: Image from NOAA, annotations added)

A 57-year-old man named Matthew Riser, has been arrested and charged with three citations, after he allegedly told authorities he lit the toilet paper at his campsite and later tried to put out the resulting fire with his sleeping bag.

Aside from being cited with building a fire when burn restrictions were in place, Riser has been accused of marijuana possession.

Today's gusty winds are forecast to die down in the evening, and higher levels of moisture are supposed to arrive later this week. So with hard work by firefighters, and maybe a little luck, this blaze won't turn into a monster akin to New Mexico's Hermits Peak and Calf Canyon Fire.

That one began on April 6th, and by late May it had grown to become the largest wildfire in the state's history. It has now scorched 500 square miles — an area the size of Los Angeles. It is still not fully contained.

With almost all of the western United States in drought, any spark could potentially ignite another monster. In California in particular, worsening climate change over the long run, and paltry precipitation and warm conditions this past winter and spring, have sent risks soaring.

The U.S. Drought Monitor map for June 7, 2022. Most of the western half of the continental United States is in drought. (Credit: National Drought Mitigation Center)

Already in 2022, the state has seen 2,504 incidents that have burned 11,484 acres, according to Cal Fire. In the past, wildfire season in California usually got started in July.

So please, if you are in California, or anywhere else in the Western United States, make sure to follow all burn restrictions.

And just don't be stupid!