For a Healthier World, Start With Biodiversity

Biodiversity loss threatens not only the health and livelihood of our planet, but humanity, too. 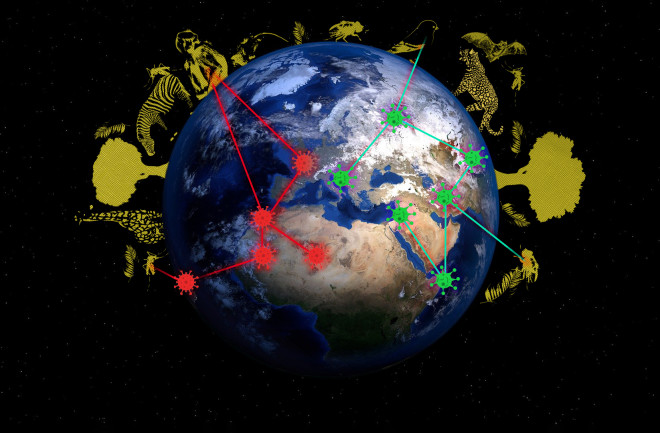 One Health is a collaborative, multidisciplinary approach—working at the local, regional, national, and global levels—with the goal of achieving optimal health outcomes by recognizing the interconnection between people, animals, plants, and their shared environment. (Credit: Los Alamos National Laboratory)

Historically, an estimated 0.1 percent of all species go extinct each year. That may not sound like a lot, but considering that there are 1.7 million species that have been scientifically identified so far, that means an annual extinction rate of 1,700 species, or more than four per day.

This is known as the background extinction rate, which is the number of species that can be expected to go extinct over a period of time, based on non-human factors. Today, the rate of extinction is an unprecedented 1,000 times higher than natural background rates, with recent reports indicating the risk of losing 1 million species in the near future.

But protecting endangered species is not just about saving them from extinction for the sake of preservation; this loss of biodiversity can have far-reaching consequences. Biodiversity—the measure of variability of life in a habitat or ecosystem—impacts livelihoods, food security and productivity in a variety of economic sectors, including tourism and agriculture. Biodiversity also impacts the spread of Infectious diseases, which can severely impact individuals, communities, and society as a whole. Preserving biodiversity is one important step to creating a healthier world.

Not surprisingly, large-scale environmental changes, through processes such as land-use change and climate change, are a primary reason for the significant loss of biodiversity we’re seeing today.

Changes in land use, which include conversion for agriculture, fossil fuel extraction and human settlements, result in displaced wildlife, forcing animals to find new habitats, which in turn creates new species interactions and opportunities for disease transmission, including transmission to humans.

For example, a recent study found that a 10 percent increase in deforestation in the Amazon rainforest led to a 3 percent rise in malaria cases. This happened because disease-carrying species, such as mosquitoes, were forced into human settlements.

Furthermore, climate-change driven drought, hotter temperatures, rising sea levels and flooding are forcing humans to relocate to new areas, creating new species interactions when they encroach into wildlife habitats. Conversely, these events can also force wildlife into new areas. This can be seen in areas where heavy rains increased rodent populations in human settlements and, in turn, caused more cases of plague.

So, what can we do to limit disease transmission?

These are the kinds of problems that the Ecological Health Security Lab at Los Alamos National Laboratory works to address, where we approach this problem in line with the One Health Concept. One Health is a collaborative, multidisciplinary approach—working at the local, regional, national, and global levels—with the goal of achieving optimal health outcomes by recognizing the interconnection between people, animals, plants, and their shared environment.

An essential component of detecting and preventing emerging diseases in a One Health framework is genomics. Next generation sequencing and bioinformatics are critical biosurveillance tools for helping in the early detection of diseases in humans, livestock, and wildlife. By understanding the whole ecology of disease systems, such as all the potential hosts involved and circumstances surrounding transmission, we can recognize, and eventually predict, how changes to biodiversity may lead to altered disease risk.

With that in mind, a few key steps can limit negative impacts on biodiversity for the purpose of health security. First, recognition and investment in biodiversity and ecosystem protection at the local level is critical, as is climate change awareness and mitigation at both the local and global levels.

Second, public health and medical professionals should be given the tools to integrate information from the environmental and biodiversity sectors into monitoring and early-warning and response systems, as well as clinical case management. This can be aided by enhanced understanding of links between health and biodiversity, as well as the recognition of changing risk for emerging infectious diseases.

And third, prioritization and planning processes should be conducted in line with a One Health approach, ensuring key sectors, risks and benefits are not missed, with dedicated effort to ensure environmental advocacy organizations are empowered to contribute to health security efforts. These steps require collaboration and cooperation among many different groups across the world.

It is important to address these issues now. Ensuring collaboration and coordination between environment, human and domestic animal sectors is crucial to successfully reducing threats to biodiversity, and reducing the threat of infectious diseases.

Andrew Bartlow is a research scientist in the Biosecurity and Public Health group at Los Alamos National Laboratory. He works on biosurveillance projects around the world, and studies how environmental change and ecological disruption influence disease dynamics in populations, communities, and ecosystems.

More From Discover
Health
Calorie-Restricted Diets May Not Live Up to the Hype
Health
The Science of Forming Healthy Habits
Mind
The Neuroscience of Emotional Eating
Health
A New Era for Obesity Treatment?
Health
Eating Disorders Have Spiked Amid the Pandemic
Mind
Do Antidepressants Change Your Personality?
Recommendations From Our Store
My Science ShopDiscover STEM Kits
My Science ShopDiscover 2022 Calendar
My Science ShopStrange Science
My Science ShopElements Flashcards
Shop Now
Stay Curious
Join
Our List