Could This Millennia-Old Remedy Become a Pharmaceutical Marvel?

The seeds of the black cumin plant, also known as Nigella sativa, were recognized by the Prophet Muhammad as curing every illness besides death. Now, they may be incorporated into mainstream drugs. 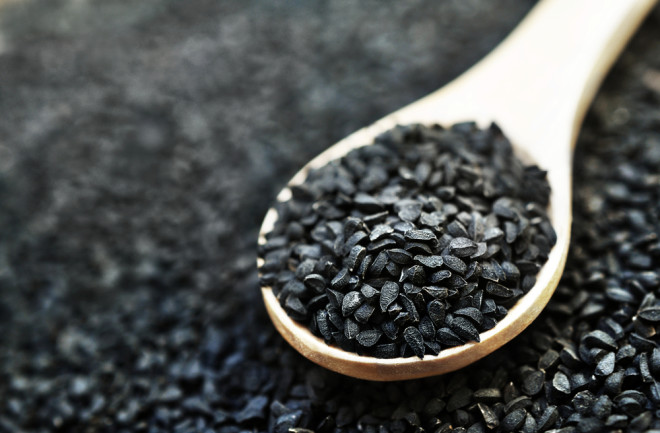 The black cumin or Nigella sativa plant has been used for more than 2,000 years in traditional remedies throughout Asia, Africa and Europe. Also known as “Love in a Mist” and the “Seed of Blessing,” the seeds were even found in King Tut’s tomb and praised by the Prophet Mohammed as a remedy for “every illness except death.” Black cumin seeds and their extracted oil have long been taken orally and applied to skin to maintain overall health and combat a wide range of ailments — including those affecting the digestive tract and the cardiovascular, immune and respiratory systems.

Over the past few decades, researchers have taken a closer look at the popular remedy and recognized its potential as a clinical drug. Building on knowledge from traditional medicine systems like Ayurveda and Unani, both cell culture and animal studies (along with a smaller number of human ones) have delivered promising early data.

“Some of the results are quite extraordinary,” says Michael Greger, a general practitioner specializing in clinical nutrition and the founder of NutritionFacts.org. For example, a 2014 study found that menopausal women taking a daily gram of black cumin powder reduced their bad LDL cholesterol by 27 percent within two months. “That’s the kind of result you’d expect from taking a statin drug, but it was achieved with just a sprinkle of a spice,” Greger says.

Other findings within the last decade suggest that black cumin seeds may help treat or relieve symptoms of a wide range of conditions — including type 2 diabetes, obesity, asthma, memory loss, male infertility, rheumatoid arthritis and certain types of cancer. Researchers have also looked into N. sativa as a COVID-19 treatment, though the November 2020 study hasn't received peer review.

While teams in Asia have published plenty of studies on N. sativa’s possible applications, Esam Dajani says he has observed a lack of attention from scientists based in Western countries. Dajani is a biomedical scientist at Loyola University Chicago who consults in pharmaceutical development.

Ultimately, Dajani hopes that black cumin seeds can be incorporated into drugs for difficult-to-treat conditions with ineffective or nonexistent therapies, like cancer, multiple sclerosis and memory decline. That’s why he has published two reviews on black cumin trials and evaluated their health benefits. “I wanted to open the eyes of the world,” he says. “We have a treasure here … It needs to be considered and developed.”

The Source of Black Cumin’s Power

Mighty ingredients live within each seed, measuring about .12-inches long. These include thymoquinone, the compound suspected as the primary source of the benefits. Combined with other substances like alkaloids (nitrogen-filled organic compounds), proteins and fatty acids, the seeds seem to possess antioxidant, anti-inflammatory and antimicrobial properties.

This bundle of powers may be what drove favorable results in trials so far. For example, its  anti-inflammatory and immune system-moderating abilities could help explain why N. sativa oil appeared to be useful in patients managing rheumatoid arthritis in combination with prescription drugs. The former aspect could also have helped human study subjects control certain asthma symptoms.

Even more, the seeds’ inflammation-fighting capacities may combat cancer progression: They could prevent cells from multiplying uncontrollably and forming tumors, Dajani says, along with turning on and off certain cancer-associated genes. Thymoquinone may also boost the results of chemotherapy while reducing its severe side effects, including skin damage. While this hasn’t been tested in humans, Dajani says, lab models have brought encouraging results, particularly in blood cancers.

Its anti-cancer potential has led some scientists to look into synthetic versions of thymoquinone. One lab-made hybrid seemed to deliver better outcomes than a popular chemotherapy drug, yet without its toxicity and adverse reactions like nausea, hair loss and tiredness — or even risks of causing additional cancers, as is the case with some treatments.

Just as cancer remains a challenge for medical researchers, so do diseases that affect the brain and broader nervous system like dementia, Parkinson’s and multiple sclerosis. Thymoquinone may protect brain cells from injuries, which could buffer the cognitive decline associated with these conditions. But like the anti-cancer claims, these findings come from animal models (usually tested on rats) and haven’t yet been proven in people.

The human data that we do have, meanwhile, mostly came from relatively small trials that include fewer than 100 subjects. Overall, further human studies are required to learn about N. sativa’s influence on a variety of diseases, Dajani says. Many important questions remain unanswered, like the exact properties of its active ingredients and what doses people require for specific purposes.

It’s also uncertain whether N. sativa seeds and their byproducts pose any significant safety hazards. Like any drug, researchers need to determine whether it interacts with certain medications and dampens their effectiveness, or even harms users. Moderate doses seem to be safe so far, Dajani says, even when administered over a yearlong timeframe. But direct application has been reported to cause skin rashes, and oral doses have prompted minor effects like nausea and low blood sugar.

When Could It Become a Drug?

Despite interest from scientists across a range of fields, you likely won’t see a prescription medication incorporating N. sativa seeds’ chemical compounds anytime soon. To achieve this highly expensive and time-consuming goal, Dajani says, it will be crucial to garner technical and financial support from pharmaceutical companies and government agencies like the National Institutes of Health (NIH). Right now, he isn’t aware of any such collaborations, but hopes that his work catches their attention. Plenty of people have nevertheless continued the millennia-old tradition of acquiring black cumin seeds and oil via herbal medicine providers — without the need for pharmaceutical intervention.

But researchers have faced obstacles in the past while attempting to boost thymoquinone's effects: It can be difficult for the body to absorb and is sensitive to light and heat. Still, an ethical dilemma may arise when a relatively cheap and widely available supplement is incorporated into what could become extremely pricey treatments.

Greger has pointed out that, due to industry sway, doctors often pursue a drug-intensive style of medicine when lifestyle changes may also be effective. Instead, he recommends consuming foods like N. Sativa seeds to lower health risks. “I can’t stress enough the importance of eating whole foods, like black cumin seeds, rather than trying to take extracts or isolated components, even a prominent constituent like thymoquinone, in pill form,” Greger says.

Dajani disagrees, emphasizing that the active ingredients within black cumin seeds must be converted into standardized, purified doses to be fully effective for their intended uses.

While Greger points out that it’s impossible to patent natural compounds, you can patent new uses for them, along with their derivatives (which would include synthetic forms of thymoquinone). Thousands of patents have proposed herbal and pharmaceutical uses for N. sativa and its byproducts — while some have received approval in the past few decades, nothing has yet penetrated the U.S. drug industry.

It’s important to note that plenty of popular medicines have originated from herbal traditions, Dajani says. These include aspirin, which came from willow bark, a heart failure drug called digoxin that was sourced from foxglove plants, and the anti-malarial treatment called quinine that was isolated from a cinchona tree’s bark.

A key advantage of pharmaceutical development: Scientists can modify the structure of plants like N. sativa to become longer-acting and easier for the body to absorb, Dajani says. “Sometimes, you can take botanically derived medicines and change the structure to improve its activity — and make them better medicines than what nature has given us.”

More From Discover
Health
Why Bacteria are the New Disease Fighters
Health
This Senolytic Antibody Drug Could Combat Aging, and the Diseases It Brings
Health
Natural Wine and the Debate Over 'Healthy' Alcohol
The Sciences
Why Human Foreskin Is a Hot Commodity in Science
Health
Menthol Cigarettes Are Getting Banned — Here's Why
Health
This Rare Genetic Condition Leads to Cancer After Cancer
Recommendations From Our Store
My Science ShopDiscover STEM Kits
My Science ShopDiscover 2022 Calendar
My Science ShopStrange Science
My Science ShopElements Flashcards
Shop Now
Stay Curious
Join
Our List