Your relationship with the screen and your favorite reality TV stars can bring benefits or risks to your psychological well being. It depends on what you are watching, why and how often. 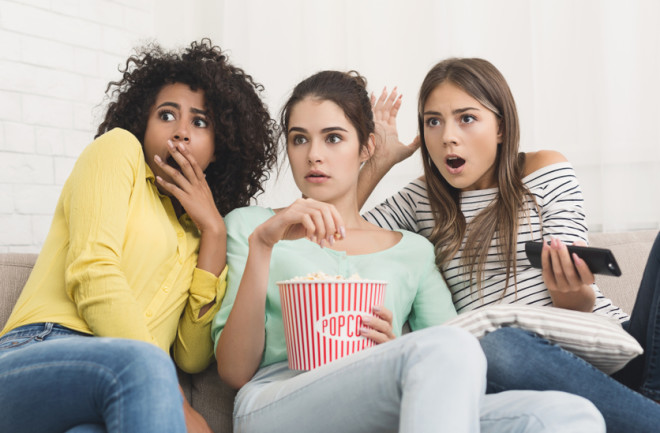 It’s been a long day and all you want to do is put on your oversized sweats, pour your preferred beverage and stream your favorite reality TV show. Whether it’s The Real Housewives, Survivor or Flip This House, we can’t seem to get enough. Ever since The Real World debuted in 1992 on MTV, reality TV has been the guilty pleasure that keeps on giving. But why? Why do we love to live our lives vigorously through the reality stars we think we know?

John Francis Leader, a cognitive scientist who specializes in media at University College Dublin, says that the research is still catching up, but in general, reality TV meets two uniquely human needs. “We innately have two competing drives: one, to be safe and comfortable, and the other, to enjoy adventure and risk,” he says. “While in real life these can be diametrically opposed, reality television meets both of them at the same time.”

Basically, there’s nothing we love more than floating down the Congo River on The Amazing Race — all from the comfort of our couch. And we don’t have to worry about getting traveler’s diarrhea because in real life our frozen pizza is cooked all the way through. What’s more, says Leader, real life feels boring compared to the wholly edited version that we love to watch on TV.  “Even if you have a thrilling life, the more mundane details just aren’t as exciting,” Leader says.

Part of the reason reality TV feels so real is because of the way our brains interpret it. If you were to look at neuro images of the brain when we’re watching the Deadliest Catch, the same portions would light up whether we were watching from the comfort of our living room or on the boat, crabbing off the actual coast of Kodiak, Alaska.

“It’s a sweet spot neurologically where our emotional systems can’t tell the difference between fact and fiction,” Leader says.

We also love to watch because our brains can become addicted, craving the neurotransmitters like dopamine and serotonin that get released as we watch. The release is similar to when we're checking our phones for new emails and likes on social media. And in recent years, reality TV has been systematically linked up with social media in order to provide that double whammy of dopamine.

At the same time, we feel like we know the people on our TV screens and are part of their circle. This often provides a false sense of connection to the reality stars we watch nightly, gleaning intimate details about their lives — perhaps more than what we know about our own friends, says Leader.

While sometimes reality TV helps us feel connected because we’re rooting for our favorite stars, other times it highlights some of our less positive human attributes, says Carole Lieberman, a psychiatrist and consultant for reality shows.

“We love reality TV because it allows us to live vicariously through the show participants without being publicly humiliated ourselves,” says Lieberman. “We like to watch others squirm, be humiliated, disappointed in love and other experiences that everyone goes through, so we can understand them better and not feel alone.”

Today’s media landscape is crowded with a range of reality TV shows. Their overall impact on mental health depends on what you’re watching. If you love cheering on your favorite home buyer on House Hunters International, that’s not such a bad thing. But if you obsess over drunken fights between the women of Real Housewives, it may be worth taking a break.

Some reality shows are more beneficial than others, Lieberman says. One variable is to consider whether the show focuses on making participants look bad, or perhaps it’s about taking viewers to places or situations that are new and interesting.

Most people enjoy some amount of reality TV, but if you’re watching too much, some research shows that you’re more likely to feel isolated and insecure. And at some point, you should be experiencing your own life apart from the reality stars you know and love.

“If we are learning about things we’re curious about and not just enjoying the misery of others, it can be good for us mentally,” Liberman says. “But if we are just enjoying putting others down, then this isn’t mentally healthy.”

Reality TV can be good in moderation, perhaps like a fine pour of cabernet — too many glasses can send anyone over the edge. The bottom line, says Leader: It can be a great tool for noticing those aspects of life that bring us excitement and fulfillment, but it’s your responsibility to take steps in real life to meet those needs. So if you’ve had your eyes peeled on the last five seasons of the Great British Baking Show, maybe it’s time to turn off the tube, pull out your favorite cookbook and preheat the oven.