Green Spaces Are a Necessity, Not an Amenity. How Can Cities Make Them Accessible to Everyone?

A growing body of science is demonstrating that spending time in nature — or even an urban park or garden — is good for us. But the grass isn’t green for everyone. 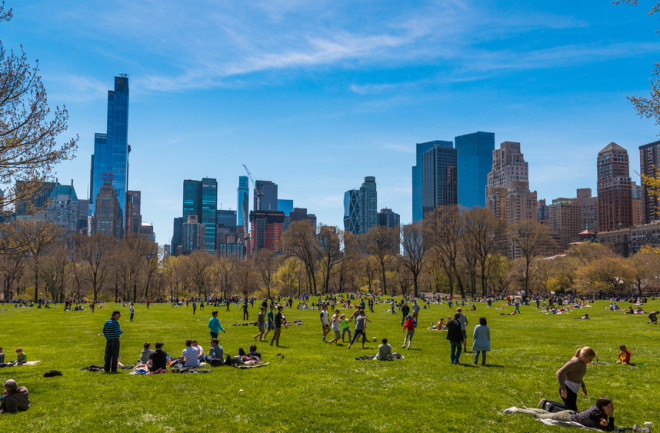 Homebound city dwellers gained a newfound appreciation for their local parks and gardens during COVID-19. Green spaces became a lifeline for people to get out of the house, relax and gather safely.

But these oases beyond our doorsteps are much more than places to hang out for a couple of hours. Researchers have long known that urban green spaces are critical to our emotional and physical wellbeing.

“[Green spaces] are not an amenity, they’re a necessity — we have to have it,” says psychologist Marc Berman at the University of Chicago. “Just like clean water or clean air, we have to have natural spaces in our environment for people to be able to function well.”

While pandemic lockdowns called attention to the importance of green spaces, it has also brought to light how access to nature is diminishing as more people move to cities — and oftentimes, low-income and people of color experience the greatest barriers. With 80 percent of the U.S. population residing in cities, providing accessible and high-quality green spaces is now recognized as a key way to promote better long-term health among all residents — not just a privileged few.

Parks, waterfronts, walking trails and sports fields are all considered green spaces and they provide areas for people to exercise, relax and socialize. Studies have found that people who spend as little as two hours in nature each week report higher levels of wellbeing compared to those that don’t. These boosts to mental and physical health span across socioeconomic statuses, neighborhoods and genders. Even if you’re not the outdoorsy type, it’s still possible to reap the benefits. Time spent outdoors still results in positive cognitive benefits — regardless of if you are actually enjoying yourself.

Perhaps it’s not surprising that regularly visiting parks can lower depression, improve sleep, reduce stress and bring about greater levels of happiness. But beyond that, green spaces may affect our lives in far-reaching ways. A growing body of work suggests that interacting with nature might improve cognitive performance, attention, memory and creativity.

In fact, living near a green space might even help you live longer. A scientific review published in The Lancet Planetary Health found urbanites living near a park or a garden had a lower risk of premature death. In their work, the researchers used a vegetation index to measure the density of greenery in locales. Using their scale, barren areas composed of rocks or sand would score closer to a zero, while an area like a lush tropical rainforest would score closer to one.

The researchers found that the higher the vegetation index, the lower the rate of premature death. When an area’s vegetation index increased by only 0.1, those living within a third of a mile from the space experienced a lower rate of premature death by about 4 percent. They also found that green space benefits are “dose-dependent,” meaning that those who spend the most time in green spaces tend to experience greater health benefits. But not all green spaces will do the trick.

“If you're in a park and right by a busy road, you're probably going to get fewer benefits than if it's more secluded and quieter,” said Berman. “The more immersive and the more separated [the green space] is from all the distractions in the city environment, the more the benefit.”

Why Are Green Spaces Good for You?

It’s no wonder that being around lush trees and basking in the sunlight feels good, but why is that the case?

Other research, however, suggests that there is something inherent about green spaces themselves that are good for us. According to the attention restoration theory, our daily lives are often cognitively draining and this can result in poorer moods. But the stimuli nature provides creates a restorative environment that relieves attention fatigue.

Experts say these conditions are detrimental to health because they amplify pre-existing conditions and contribute to heat-related deaths and illnesses, such as respiratory difficulties and heat stroke.

More air conditioning isn’t the answer, which is energy intensive and expensive. But more green areas in cities can curb the heat island effect by reducing surface and air temperatures — in addition to sucking harmful smog and pollution from the air.

The Problem of Becoming “Too Green”

People of color are three times more likely than whites to live in nature-deprived areas, while 70 percent of low-income communities live in areas lacking green spaces. And while these are troubling statistics — sometimes adding green spaces in neighborhoods can backfire.

Green spaces are in demand, just like any other desirable neighborhood amenity. Adding new green spaces in neighborhoods that previously lacked them can increase rents and displace lower-income residents who may have lived in these communities for decades.

Known as “environmental gentrification,” a term coined by professor of urban studies Melissa Checker at Queens College, it refers to a situation in which only wealthy individuals benefit from new green spaces.

Checker says the phenomenon builds on the popularization of the environmental justice movement, founded on the principle that all people are entitled to equal environmental protection regardless of identity — the right to live, work and play in a clean environment. Developers are cashing in on this growing interest in sustainability and green living. And while making neighborhoods greener appears as both ecologically and socially sensitive on the surface, environmental gentrification forgoes equity in favor of profit‐minded development.

Threats of environmental gentrification force people from communities who would otherwise support environmental improvements to face an awful paradox — choosing between new green spaces that would work to address environmental justice issues, making neighborhoods healthier and more attractive, or rejecting such initiatives to resist gentrification and increased housing costs that tend to follow.

Still, although gentrification can result from new urban green spaces, it’s not predestined. The just “green enough” strategy works to avoid this paradox by focusing on environmental goals defined by the communities affected by a lack of green spaces while avoiding additional developments to keep locals in place without attracting wealthier individuals.

Being “green enough” requires a balancing act of collaboration and interests between local governments, community groups and environmental advocates to be successful, but it is an attempt to ensuring equitable access to the benefits of green spaces.

“We think these environments can nudge people into better health and better psychological wellbeing, so let's do that,” said Berman. “Let's start changing the environment.”

More From Discover
Mind
Gut Bacteria's Role in Anxiety and Depression: It’s Not Just In Your Head
Mind
What Psilocybin Psychedelic Mushrooms Are Teaching Us About Human Consciousness
Mind
Try These 6 Science-Backed Secrets to Happiness
Health
Why Eating Disorders Are so Difficult to Treat
Health
Does Seasonal Affective Disorder Get Worse with Age?
Mind
Why Are Emotions Contagious?
Recommendations From Our Store
My Science ShopDiscover STEM Kits
My Science ShopDiscover 2022 Calendar
My Science ShopStrange Science
My Science ShopElements Flashcards
Shop Now
Stay Curious
Join
Our List