Whether it's a friend, coworker or romantic partner, a rewarding relationship can come with a variety of positive benefits. 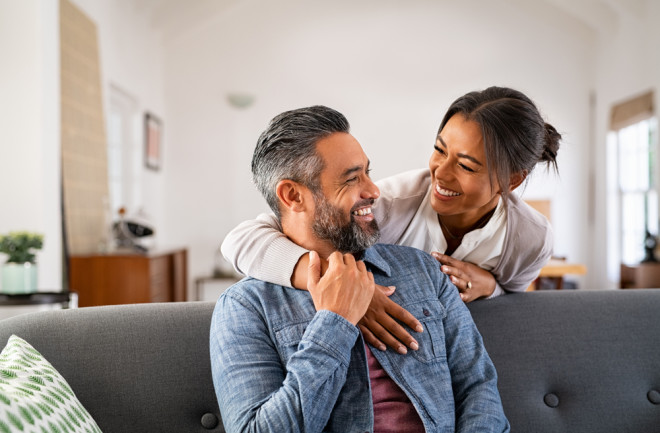 Any relationship, whether with a friend, co-worker, family member or romantic partner, inevitably impacts our well-being. The important question, though, is whether impact is ultimately negative or positive. When looking at our relationships with others, experts say that the most important factor to consider is the quality of a given relationship.

Solomon adds other factors that can come into play, such as a sense of trust and commitment.  “Commitment is essential,” Solomon notes. “That sense that you were here yesterday, you’re here today, you’re going to be here tomorrow. That sense of continuity helps us relax and makes it safe enough to be vulnerable.” Beyond that, the authors of a 2005 study published in the Journal of Social and Personal Relationships found that those who shifted into more committed relationships over time were rewarded with improvements in their overall well-being.

When it comes to our romantic ties, Solomon emphasized there are physical and emotional health benefits that come with a rewarding relationship; in other words, when there’s emotional safety and physical connectedness between partners. And according to authors of another study published in the Cognitive Therapy and Research journal, close, supportive relationships can be crucial for dealing with stress.

Relationships that aren’t “high-quality" can lead to negative outcomes, too. “There's science that indicates that when relationships are strained — when there is a kind of chronic, unremitting conflict — there are negative health consequences," says Solomon. "So, relationship stress and strain affects our physical health and our emotional health in very negative ways."

One 2018 study published in the Journal of Happiness Studies found that people who were “not too happy” in their marriage were over twice as likely to report worse health (and nearly 40 percent more likely to die) over the follow-up period than those who thought of themselves as "very happily married." While the authors note that the research on the longevity and health benefits of marriage is firmly established, people in unhappy marriages may be a particularly vulnerable population.

Another 2019 study even emphasized that emotional abuse within a marriage can lead to an increased risk for suicide for women, with infidelity ranked as one of the strongest predictors. “Love and abuse cannot coexist,” Solomon adds. And while there’s plenty of research that illustrates how loneliness can be bad for one’s health, being in a relationship with just anyone isn’t going to automatically lead to positive outcomes. The key, Solomon says, is fostering a healthy relationship.

How to Build Healthy Romantic Relationships

So how exactly do you foster a quality relationship? Solomon notes that there's an entire field of relationship science dedicated to understanding what distinguishes healthy couples from unhealthy ones. "It's very hard for me to imagine creating a high-quality relationship without both partners, being willing to practice relational self-awareness,” Solomon says.

While a healthy couple will utilize rational self-awareness, unhealthy couples may turn to other methods like blame or shame. Blame, for example, may look like pointing a finger at the other person and saying things like, “We’re having this problem because of what you did,” Solomon says. Whereas shame emerges when one partner says to the other, “We’re having this problem because of what I did.” Rather than employing blame or shame, Solomon recommends people look at their own behavior and try to understand why they’re having that reaction. In other words, being willing to check in with ourselves before resorting to finger pointing or feeling ashamed.

It's well-known that communication is necessary for a happy and healthy relationship. But proper communication is still one of the biggest problems licensed mental health counselor Alexa Andino sees with couples. One of the first tasks Andino asks couples to do before they start therapy is to take a quiz to find their love language, or the way that they prefer to receive love. Why? Love languages are a major aspect of how people communicate and how they want to be communicated to, Andino says.

In fact, learning how you and your partner give — and receive — love can help solve a host of relationship problems. A study published in PLoS ONE in June found that that those in satisfied relationships express affection in their partner's preferred love language. The study authors even suggested that learning your partner's love language could improve the quality of your relationship.

High-quality relationships and a healthy environment in the workplace can lead to other positive outcomes, too. One 2019 study published in the Behavioral Sciences journal found nurses had a higher level of commitment to their job, less stress with better workplace relationships. As a result of better relationships in the workplace, patient care was improved, as well.

There’s no doubt humans are social creatures, and friendships can impact our overall well-being. Accordingly, a 2018 study in the journal Genus found that friendship was linked to an individual's satisfaction with life, but also noted that this positive association was attributed to quality of the friendship itself. In this case, the researchers measured quality in terms of the person's satisfaction with that relationship, as well as its intensity, or the frequency with which someone sees their friends.

This points to the fact that quality relationships can take time and effort. One 2018 study in the Journal of Social and Personal Relationships looked at how long it takes to make a friend. The findings suggest that it's possible to gain a good friend after spending 120 to 160 hours over together a period of three weeks, but it can sometimes take longer. This time and effort can be worth it, though; studies show that better friendship and higher levels of closeness bring higher levels of happiness.

The opposite effect can be true, too. Researchers of a study published in PLoS One in 2013 surveyed over 4,000 people with ages ranging from 25 to 75, and then again 10 years later. They found that participants with the lowest quality of social relationships were more than twice as susceptible to depression than those with the highest quality ties.

Overall, some relationships can be unhealthy, draining and have negative effects. Taking the time to foster relationships with a higher standard — whether with a romantic partner, a friend, family or even a co-worker or manager — can pay off and be beneficial in the long run. If you stick to the science, it's clear that investing in high-quality, healthy relationships is the way to go.