How the Pandemic Has Changed Our Relationship With Technology

From virtual theater to smartphone-driven distress, COVID-19 is changing the digital landscape for what appears to be both better and worse. 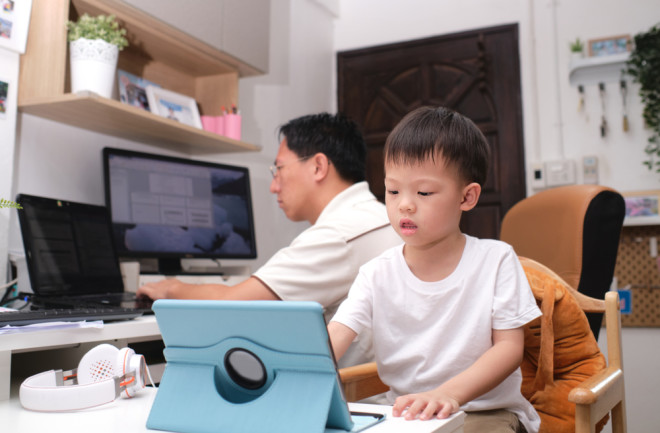 When the COVID-19 pandemic emerged in the spring of 2020, Americans became more isolated than ever. Suddenly work, social events and live entertainment migrated from the realm world onto digital platforms. Between social media, video calls and entertainment, people around the world began to spend a staggering amount of their waking lives in front of screens.

While the deleterious effects of compulsive technology use are often cited, the same platforms have also allowed many people to stay social, stimulated and productive while stuck at home. In a 2021 Pew Research Center survey, 90 percent of Americans said that the internet has been important or essential to them during the pandemic. A majority of respondents said video calls had helped them stay connected with friends and family.

Even after the initial wave of COVID-19 waned, Americans continued to use the internet at unprecedented rates. In a second Pew study from last year, nearly half of respondents between 18 and 29 years old reported using the internet “almost constantly.”

So after two years of excessive screen time, how has our collective internet obsession actually affected our health?

Long before COVID-19, scientists had already recognized the serious impacts of technology misuse. “Going back 15 years ago, we found that problematic use of the internet was associated with a number of negative health outcomes,” says Marc Potenza, a psychiatrist at Yale Medical School.

In 2019, the World Health Organization adopted the 11th revision of the International Classification of Diseases (ICD-11). It included two emerging disorders that stem from compulsive online behaviors: internet gaming disorder and gambling disorder (predominantly online). Experts argue that online shopping, pornography and social media may cause addictive disorders as well. “During the onset of the pandemic, there seemed to be increases in online engagement for all of these behaviors," Potenza adds.

Addiction Versus High-Frequency Use

A long-term study that analyzed problematic gaming and smartphone use in Chinese schoolchildren hints at a more complex story. While compulsive gaming was associated with psychological distress pre-pandemic, the two were not correlated after the onset of COVID-19. The results, published in the Journal of Addiction Medicine last March, support a preliminary theory that gaming might actually provide an avenue to cope with loneliness and emotional stress during periods of isolation.

Interestingly, the same research noted that problematic smartphone use was increasingly associated with psychological distress after the onset of the pandemic. This result points towards another theory — that social media can exacerbate COVID-19 anxiety. This effect, coupled with the well-documented link between social media and depression, may have led to the outcomes observed in the study.

Overall, the pandemic has highlighted the importance of discerning frequent internet use from addictive behaviors. While many people use the internet extensively during their waking hours, only a small percentage experience the pitfalls of addiction. “For a disorder to be present there needs to be some sort of impairment in a major area of life functioning,” Potenza says. “It’s important to try to disentangle high-frequency use from unhealthy and problematic use.”

Despite the downfalls of isolation, crises can also inspire creativity. For example, the pandemic spurred a virtual reality boom in the art world.

This technology came in handy in March 2020, when England’s Royal Shakespeare Company (RSC) was in the early stages of a production of “A Midsummer Night’s Dream.” As the pandemic shuttered venues across the U.K., they were forced to quickly find ways to adapt. The company worked feverishly with partners in tech to create a prototypical VR theater production. Though the complexity of Shakespeare’s original story was boiled down to an eight-person cast and a single narrative strand, the result was highly immersive. “We had to find a way to embody this narrative,” says Sarah Ellis, RSC’s director of digital development

In the final production, the actors' movements and speech were tracked and projected into a virtual forest. Audience members entered the fictional realm as fireflies and buzzed around the Shakespearean sprites’ heads as they propelled the story to an inevitable conclusion.

The performance reached the widest audience of any RSC production to date. The 65,000 attendees hailed from 92 countries and 76 percent of them were at their first-ever RSC production. Ellis was elated. “We often talk about new audiences, but we don’t talk about new content,” she says. “It was amazing to see the younger generation show up.”

While COVID-19 has stuck around for nearly two years, the broader impacts on our collective habits, mental health and culture remain unclear. But it is evident that the pandemic changed our relationship to technology — for better and worse.