Shift workers who have irregular sleep schedules are at risk of shift work disorder, which can impact their physical and mental health. 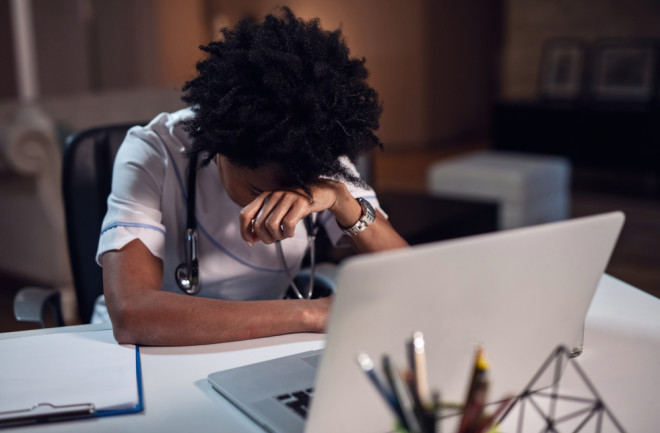 A nine-to-five job inside the office has always been the image of a typical workday, but employees from many different industries often work outside these usual hours. Hospital staff, emergency responders and service workers are only some shift workers, which comprise about one-fifth of the U.S. full-time workforce.

You could say that non-traditional shift work is necessary to keep a modern, bustling society operational. However, what some people view as a benign albeit inconvenient work schedule, is actually associated with many health concerns. And reducing these additional risks is important for millions of working adults.

Melatonin is crucial in sleep regulation and its suppression muddles with the body’s circadian rhythm, or the internal body clock. For instance, shift workers usually sleep during the day when we are meant to be alert — which can result in short and fragmented daytime sleep. And they work at night when sleepiness takes over.

Disrupting the circadian rhythm isn’t just about sleep; it also affects how the entire body functions, including the cardiovascular system, metabolism and digestion, immune system and hormonal balance, Oller adds.

That’s why irregular or night shifts are associated with the increased risk for obesity, hypertension, cardiovascular disease and diabetes, not to mention cancer, to the extent that experts declared it a probable carcinogen, says Abbott.

At least one-third of shift workers experience sleep-wake disturbance and symptoms that would meet the criteria for SWD. Many shift workers don’t completely adjust to their work schedules, experiencing excessive sleepiness during work hours and significant sleep disturbance, says Oller. Going back and forth between day and night shifts can be even more detrimental than strict night shift work, Oller adds.

Although there is a widespread assumption that people who had been on night shifts for many years have completely adapted, new research shows that's not exactly the case. A recent study in eBioMedicine reported that hospital night shifters experienced significantly worse circadian activity rhythm and estimated rest quality compared to day shifters. It also found that more years of night work predicted lower rhythm index and shorter rest duration on both workdays and days off.

The authors of a new study published in Neurobiology of Sleep and Circadian Rhythms also conducted circadian rhythm desynchronization experiments on rats. They found that the health impacts of shift work persist over time because sleep-wake cycles never truly returned to normal even after subsequent exposure to a regular schedule.

“It is rare that someone working night or irregular shifts is able to — or wants to — completely avoid light or social interactions during the daytime, which means that their bodies are unlikely to completely adapt to an internal rhythm of sleeping during the day and being awake at night,” says Abbott.

How to Minimize Health Risks

To minimize the health risks of having non-traditional work hours, experts recommend keeping a regular sleep schedule even during off-work periods. Try to find a compromise sleep window that is relatively similar on days on and days off, says Abbott.

“Make time for sleep during your off time, making sure that you have a dark, quiet and uninterrupted place for sleep,” Abbott adds. “Continue to prioritize healthy habits, like regular exercise and nutritious food choices since these are sometimes harder to find in the middle of the night.”

According to a clinical review in The Journal of the American Osteopathic Association, systemic changes in the workplace also play a great role in improving circadian rhythm disorders among shift workers. Such adjustments include ensuring that employees have the same break time every day, modifying shift schedules to ease their burden of sleep debt and decreasing blue light exposure. They also suggest providing benefits that cover yearly or biannual health screening for circadian desynchrony.

Read more: Don't Worry If You Can't Sleep Through the Night. For Thousands of Years, Humans Slept in Two Shifts

Most shift workers sleep one to four hours less than non-shift workers, therefore sleep must remain a priority, says Oller.

“It is important to get at least seven to nine hours of sleep every day,” Oller adds. “Daytime sleep can also be separated into two periods of sleep: the first, a regular three-to-four-hour sleep that takes priority, and a second bout that can vary.”

Neanderthals May Have Used Animal Skulls as Decor

More From Discover
Mind
Research on Psychedelics and How Mushrooms Can Help Combat Depression
Technology
What Is a Social Media Cleanse?
Mind
Calming Kids With Electronics May Affect Emotion Regulation Skills
Mind
How Failing Could Actually Help us Succeed
Mind
Try These 6 Science-Backed Secrets to Happiness
Mind
What Is Emotional Blunting, and Do Antidepressants Cause It?
Recommendations From Our Store
My Science ShopDiscover STEM Kits
My Science ShopDiscover 2022 Calendar
My Science ShopStrange Science
My Science ShopElements Flashcards
Shop Now
Stay Curious
Join
Our List