Is Plant Protein Better for You and the Planet?

Animal protein isn’t the only way to get in this key macronutrient. Plants have protein, too — and there are good reasons to load up on this source. 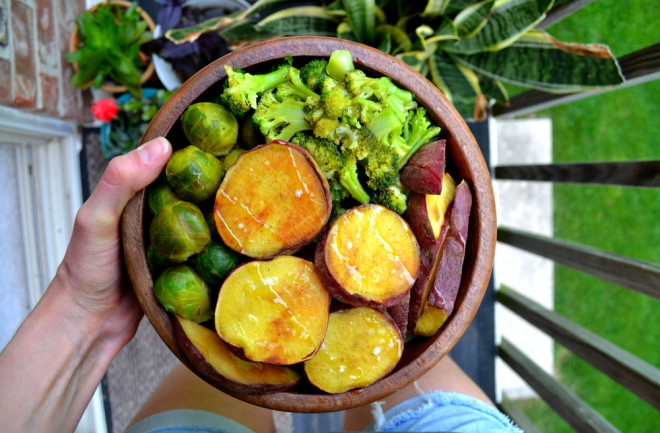 Picture protein: it’s easy to bring up a mental image of a rare, juicy steak or a plate piled high with crispy bacon. More and more though, there might be tofu, beans or quinoa on that plate. This changing picture reflects an evolution in how we understand nutrition, but also the conflicting messaging of the last decade’s food mandates: We should be eating more protein, or we’re eating too much of it, or the way we’re getting it is wrong.

Protein, despite the hype surrounding it, doesn’t have to be complicated. It’s needed for our body to work the way it’s meant to. Without it, we wouldn’t be able to build muscle and bone, fight diseases with an immune system, or regulate the body with enzymes and hormones. Many food sources, including plants, offer protein that our body can use — and the key is getting a wide range of them.

“When folks are starting off with a new type of dietary plan or lifestyle, they get really focused on certain foods, and maybe don't necessarily explore variety,” says Kristen Smith, a dietitian and spokesperson for the Academy of Nutrition and Dietetics. “It's really important that folks remember that variety is going to help with adequate intake and meeting those essential nutrients.”

And though meat packs a lot of protein into a small package, we’re certainly not limited to it. Other animal products and plants offer rich sources of protein, and they’re available to everyone. And you don’t have to go vegan to start swapping out some of that meat to benefit your health and the planet.

(Some) Protein Does a Body Good

Protein is made up of essential amino acids, materials that humans can’t make themselves. We must get them from a diet that contains protein. According to the National Academies of Medicine’s Dietary Reference Intakes, adults need 0.8 grams of protein per kilogram of weight, or about 7 grams per 20 pounds in body weight. So a 160-pound person would aim for around 56 grams of protein a day, while a 120-pound person might need more like 42 grams.

But according to Walter Willett, a professor of Epidemiology and Nutrition at Harvard’s T.H. Chan School of Public Health, adults in the U.S. don’t need to worry about getting enough — we’re usually hitting that mark or even surpassing it. “I don't think people need to go counting those numbers because the average protein intake is way over that,” he says. According to the most recent dietary guidelines, almost 60 percent of Americans eat at or above the recommended protein levels, and a little more than 40 percent are below.

Instead of the amount of protein, he says, we might want to focus on what we’re taking in along with it. Along with protein, foods contain different kinds of fat, carbs, sodium, fiber, and other nutrients. And certain meat products, though rich in protein, are high in sodium because of the way they are processed. Another thing to watch for are protein sources that are high in saturated fats, which can drive up total cholesterol.

Perhaps it’s not surprising, then, that a meta-analysis of protein studies co-authored by Willett found that a high intake of proteins from plants, as opposed to animal proteins, was associated with lower mortality risk, especially from cardiovascular diseases. This doesn’t necessarily mean one protein is worse than another: choosing what proteins to eat can simply involve weighing their respective costs and benefits over time.

Animal products like eggs, yogurt and cheese can offer protein without the meat — plus the full range of amino acids proteins are made up of. Animal proteins, including meat, are considered to be “complete” because they contain all the amino acids a body needs to build new proteins. Plant-based proteins can lack one or more of these amino acids by themselves, but combining them can deliver the full range.

Eggs and dairy, for example, offer a range of nutrients and amino acids. Large eggs have around 6.3 grams of protein apiece and offer lots of other essential nutrients like selenium, B2 and B12. Greek yogurt, which is more concentrated than regular yogurt, can pack in high calcium and a whopping 16-19 grams of protein per serving.

But some “complete” proteins like full-fat cheese or whole milk can also contain high levels of saturated fat and cholesterol, unlike plant-based proteins. That said, these foods can still be part of a healthy diet in moderation.

Willett says that comparing the “quality” of proteins based on amino acids doesn’t always mean what we think it does, anyway: “Really, that nature of ‘quality’ protein refers to how fast you can make a newborn rodent grow in the laboratory [based on what you're feeding it],” he says. Rapid cell multiplication, he added, could be a factor in concerns about links between animal protein and certain cancers. So fast cellular growth may not be the endgame for adults past adolescence. “People throughout their lifecycle don't necessarily want cell metabolism and cell multiplication revved up to high speed,” Willett says.

Plant-based proteins have always been around, but it’s safe to say their time in the spotlight has arrived. And according to Smith, there’s evidence that plant-based diets reduce the risk of diabetes, hypertension, obesity and certain cancers. She says “there's lots of data to support that eating a variety of these plant-based proteins can help you [take in] adequate protein and sufficient amino acids.” Smith’s plant-based protein suggestions include tofu, tempe and edamame, as well as high-protein grains like quinoa, and beans, lentils, nuts, and seeds.

Quinoa, for example, contains over 8 grams of protein per cooked cup, much higher than most grains, and contains all nine amino acids (making it “complete”) — including lysine, which is rare in plants. It’s rich with other nutrients, too, like magnesium, fiber, iron, and zinc. Tofu is also nutrient dense and very high in protein.

Despite the concern around eating “complete” proteins, Willett and Smith say plant sources can be combined to deliver something that’s virtually the same as you’d get from an animal product. “Classically, if you mix or combine a grain and a legume, then you get a mix that's very close to what's typically in an egg or in milk or meat,” says Willett. Think beans and rice, tofu and quinoa, or even a peanut butter sandwich. That’s why variety is so important. It's worth noting, though, that vitamin B12 is rare in plants but can be taken as a vitamin supplement.

And now, more than ever before, processed plant-based protein options are available, from Beyond Burgers to tempeh. These options appeal to people who aren’t ready to make the leap to a diet made up entirely of whole foods. While there has been uncertainty about whether or not these products are any healthier than real meat, one Stanford study, for example, found that eating plant burgers led to lower levels of Trimethylamine N-oxide, an indicator for cardiovascular disease risk, as well as significantly lower LDL or “bad” cholesterol. (Beyond Meat funded the study, but was not involved in conducting it.)

Plant-Based for the Planet

If nothing else, getting some of your protein from non-meat sources goes a long way in reducing meat’s impact on the environment. Raising animals for meat and dairy generates enormous amounts of greenhouse gas emissions, requires much more land and water, and can pollute surrounding areas much more than their plant-based substitutes.

A study from Oxford University that broke down the environmental impact of various foods found that 100 grams of protein from beef, for example, produced the equivalent of 25 times more greenhouse gas emissions than the same amount of protein from tofu.

More From Discover
Health
Liquid Meal Replacements: Can We Move Beyond Food?
Health
Calorie-Restricted Diets May Not Live Up to the Hype
Health
Why Do Some People Live So Long?
Health
The Science Behind Fasting Diets
Health
Do 3,500 Calories Really Equal a Pound of Fat?
Health
Feeling Sleepy After a Thanksgiving Meal? It Might Not Be the Turkey
Recommendations From Our Store
My Science ShopDiscover STEM Kits
My Science ShopDiscover 2022 Calendar
My Science ShopStrange Science
My Science ShopElements Flashcards
Shop Now
Stay Curious
Join
Our List