Standing Next to Your Microwave Isn't Dangerous

The decades-old concern that the humble kitchen appliance exposes people to radiation is just a myth. 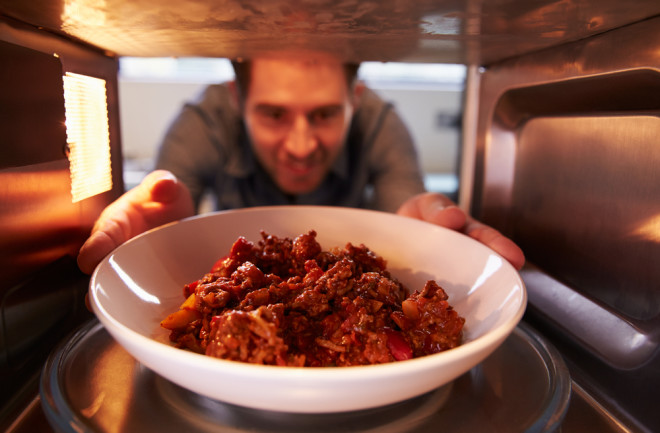 A happy accident with a chocolate bar led to one of the most reliable kitchen appliances around today. Engineer Percy Spencer was standing in front of a device emitting high-frequency radio waves when the chocolate in his shirt pocket began to melt. The change led him and his colleagues to investigate what electromagnetic radiation could do to food, and the microwave was born in 1947.

Since its earliest days, the technology has gotten smaller and lighter, and the kind of radiation used has shifted: Spencer’s discovery happened with radio waves, and the devices now rely on microwave radiation to cook our meals. Despite the changes — and how permanent a fixture microwaves have become in households — some people are still uneasy around the devices and worry about potential health effects.

“As a professor working in this area, safety is important to me,” says Vijaya Raghavan, a bioresource engineer at McGill University, who studies how industrial microwave settings can pasteurize and sterilize foods. Luckily, a lot of the safety concerns are handled by regulations, and there are simple ways for people to minimize the very small risks they face.

Microwaves are a kind of radiation, just like infrared, visible light, and x-rays. They are also relatively large: In terms of size and speed, microwaves are more like radio waves than they are the kind of light we see. Put to work inside kitchen appliances, the radiation is useful for cooking food fast. Microwaves emit from one side of the appliance while it’s running and bounce around, reflecting off the metal interior and going into your meal. There, microwaves force all the water molecules in your food to move. The spinning water molecules generate heat and voila — your leftovers, vegetables or frozen dinner gets cooked.

When it comes to making water molecules spin and create heat, microwaves don’t discriminate: They’ll do the same to your arm or leg, which is why microwave exposure can be dangerous. Exposure can burn skin. Eyes and testicles are particularly vulnerable, according to the Food and Drug Administration, because there’s relatively little blood flow in the area to carry away the building heat.

However, microwave burns only happen after someone has had a lot of exposure to the radiation — which is not something that will happen from your microwave oven. For one, microwaves can only operate if the door is closed, per FDA requirements. As soon as it opens, the radiation production stops. Any microwaves that were still within the device dissipate into the air right away, Raghavan says.

Theoretically, a tiny bit of the microwaves could leak out of any cracks, like where the door shuts. But the FDA regulates seeping radiation, too. The amount of microwave radiation the agency lets the kitchen appliances emit is significantly less than how much cell phones are allowed to release — and the levels our smartphones can generate are also considered safe.

And because any radiation coming out of an operating microwave starts to fall apart very quickly, someone would have to be standing practically up against the microwave for a long time for the rays to cause any damage. Sure, the farther away from the microwave you are, the safer it is, Raghavan says. “But if you’re certain that a microwave unit is being used, why do you want to stand next to it anyways?”

In his own lab, Raghavan uses all kinds of microwave ovens to see how they can help with industrial food preparation. He often buys standard microwaves most people put in their homes and reworked them to create the wavelength frequency he needs. Raghavan also keeps track of how much power is generated in the first place as well as how much of the microwaves are absorbed by the food or reflected. Even in this laboratory setting, he and his colleagues don’t wear protective gear. Instead, they put leakage meters near the devices.

People at home probably don’t need to stand right next to the microwave, as Raghavan points out. Also, don’t run it without anything inside. The microwaves will bounce back and damage the internal mechanisms that help transmit the microwaves, Raghavan says. And if you find your microwave keeps running once you open the door, remove it and get a new model — you don’t want to be Percy Spencer and find that radiation is melting your pocket chocolate.

Phone Notifications Are Messing With Your Brain