Surveys and observational reports are revealing the bond between service dogs and veterans with trauma. 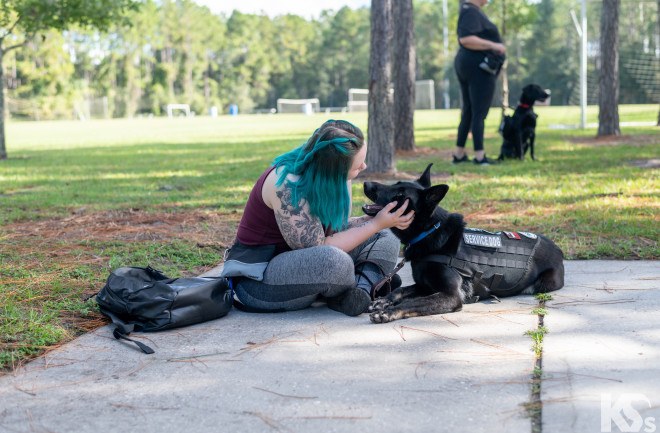 Though they’re famous for aiding individuals with visual impairments and assisting people who struggle with mobility, service dogs provide much more than physical support. They also provide mental support.

Now, a new study from PLOS ONE investigates the mechanisms behind these mental benefits, specifically for veterans with posttraumatic stress disorder (PTSD). This study, the authors say, is already improving scientific understandings of the bond between service dogs and veterans and will inspire innovations in the training and placement of service dogs in the future.

In the past, research has shown that service dogs reduce the severity of PTSD for active military members and for veterans. That said, not much is known about the mechanisms behind these reductions in severity.

Wanting to know more about this process, the study authors worked with 82 pairs of active military members and veterans as well as their service dogs, which were all trained in managing PTSD. Their research revealed that the calmer the dog, the stronger the bond between the dog and the veteran and the weaker the veteran’s PTSD symptoms.

"This study provides new information about how and why service dogs may improve mental health for some veterans with PTSD,” says Clare Jensen, a study author and a researcher at Purdue University’s College of Veterinary Medicine, in a press release. This information, the study authors say, will inform the selection and training of service dogs for PTSD in the future, as well as the placement of those dogs with particular veterans.

The study authors surveyed veterans before pairing them with a service dog and again three months after pairing them. The authors also observed the veterans’ interactions with their dogs, all in an attempt to accurately understand the benefits of the veteran-dog bond.

Analyzing these surveys and observations, the study authors then assessed the connections between the characteristics of the dogs, the closeness of the veteran-dog bond and the severity of the veteran’s PTSD symptoms. They discovered that the characteristics of a dog were not associated with any particular strength of symptoms, save for a dog’s calmness, composure and manageability, which were all associated with a closer bond and a weaker severity of PTSD.

Ultimately, the authors say that future studies could clarify and strengthen their already “promising” results. The authors conclude in their paper that their findings “set the stage for future research to rigorously test the role of canine characteristics and human-animal interactions […] in producing clinical effects.”

Is Crying Good For You?