Bacteria aren’t the only microscopic stowaways our bodies carry. Dubbed the “dark matter” of the microbiome, fungi may also play a major role in our physical and mental health. 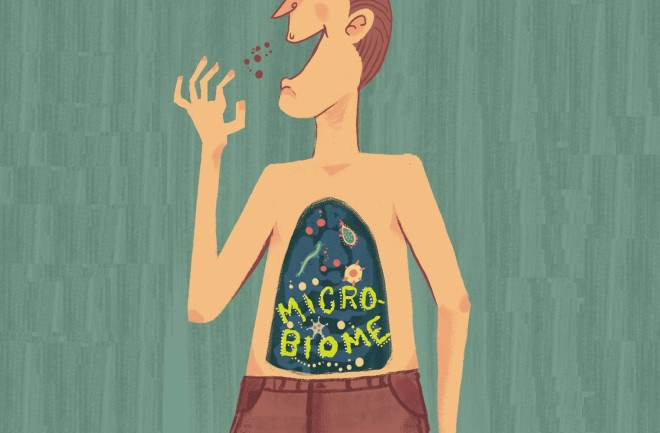 For people who suffer from inflammatory bowel disease (IBD), the daily burden of chronic pain can become unbearable. Dismayingly, doctors and medical researchers still don’t have a clear picture of what causes IBD, so the mainstays of therapy are usually surgery or immune suppressant therapies that can wreak their own kind of havoc and impinge just as much on daily life as the illness itself. For one patient who wasn’t satisfied with any of these options, relief came in the unlikely form of tiny parasitic worms.

Over time, swallowing a dose of worm eggs worked to keep this intrepid patient’s symptoms at bay where all else had failed, which led parasite immunologist P’ng Loke and his team to probe the patient’s guts to find out exactly how these microorganisms had worked their therapeutic magic. They seemed to do so by curbing inflammation, but it wasn’t until Loke teamed up with microbiologist Kenneth Cadwell’s group at New York University that they hit upon a crucial finding. It wasn’t the worms themselves that were the cure, but the way they were changing the communities of microbes that live in our guts.

“We collaborated together so that we could reproduce this in a mouse model of inflammatory bowel disease, where you could give the mouse the parasite, and it cures the disease in the mice,” Cadwell explains. “What we found was that it changes the composition of the microbiome.”

When most of us hear the word “microbiome” our minds leap immediately to bacteria. Once thought to be insidious agents of illness hiding in our food, the dirt we walk on, and the air we breathe, scientists are now learning that we need these little invisible bugs to get by, and in fact by some estimates, we’re just as much microbe as we are human when we tally the number of cells in our bodies. Bacteria have enjoyed the spotlight in recent years, with dozens of studies pointing to their critical roles in everything from metabolism to mood regulation. But a whole supporting cast of microbes also play vital roles in our health, including viruses, the ancient cousins of bacteria known as archaea, and those most mysterious and versatile of microbes — fungi.

The Fungus Among Us

Very little is known about the friendly fungi we carry with us, communities referred to collectively by microbiologists as the mycobiota. New research published recently in Nature Communications Biology hints at the complex interplay between our diets and the fungi that flourish in our guts. When researchers set out to study a specific phenomenon in a mouse model, they can choose from a dizzying catalog of made-to-order mice that will best help them answer the questions they care about. It turns out that depending on where they come from, mice can harbor wildly different communities of microbes in their guts.

These differences had big effects on how the mice handled changes to their diet, as the new study revealed. When mice were fed highly processed chow, which mimics the composition of many increasingly carb-laden modern diets, mice from three common mouse vendors put on more weight than their pals who were given standard mouse fare. But mice from a fourth vendor were resistant to weight gain, and this seemed to depend on the diversity of their gut fungi. Two kinds of fungi, Thermomyces and Saccharomyces, seemed to be particularly important for weight gain and metabolism; the more Thermomyces a mouse had in its guts, the more likely it was to pack on extra padding on a steady diet of junk food.

Read more: Gut Bacteria's Role in Anxiety and Depression: It’s Not Just In Your Head

While it’s tempting to single out specific kinds of fungi or bacteria as the keys to gut health, approaching the microbiota requires a more ecological mindset. Just as we burn food for fuel, deconstructing it into its essential elements and throwing out what we don’t need, our microbes operate chemical furnaces all their own, and the byproducts they generate in the process contribute to the ecosystems of our guts. Not surprisingly, these ecosystems are highly sensitive to our diets.

“I definitely think that by putting in these specific foods that are high fat or high carb, we are creating an evolutionary selective pressure that we’re seeing the effects of now, as you saw in this study,” explains Justin Stewart, a doctoral student who worked on the project.

The relationship between fungi and inflammation is becoming clearer to scientists, but whether this relationship is helpful or harmful is trickier to pin down. “A lot of times a little bit of inflammation is good,” Cadwell explains. “It means your immune system is ready to go, and it makes it less naïve.”

In disease contexts, though, too much inflammation can tip the scales toward more severe disease. One important way the microbiota fine-tunes this balance is by keeping all our different microbes in harmony with each other. Another recent study looked at gut fungi in a mouse model of Crohn’s disease and uncovered a tendency for a specific strain of microscopic yeast to congregate at inflammation hot spots in the intestines. Microbiologists increasingly believe that this kind of fungal overgrowth could be a byproduct of the loss of bacteria that keep fungi from overstepping their bounds, and of the diversity of our microbial cohabitants in general over time.

Read more: What Is Inflammation, and Why Is It Sometimes 'Bad' for Your Health?

This could be due to changes in our diets, or, as Cadwell explains, to antibiotic use, which in spite of the life-saving protection they offer from infectious disease, could upset the delicate balance of our internal ecosystems in ways that have unforeseen consequences. Research into the specific functions of the array of microbial actors we’ve harbored within us for millennia has still just begun, but what we know for sure about the microbiota is that the whole is much more complex than the sum of the individual parts. “We're really in this lovely age of discovery,” Stewart says.

“There are so many species of bacteria, and so many functions that they do in the gut. There are so many fewer fungi, but dysbiosis in these functions seems to be really important. It's a small community that's making a huge impact, is what we are quickly figuring out.”

More From Discover
Health
What Factors Matter Most For Weight Loss?
The Sciences
Blessed Are The (Tiny) Cheesemakers
The Sciences
This WWII Shipwreck Is Pouring Pollutants Into The North Sea
Health
Healthy Meals And Snacks Are Important For Kid's Brain Function
Health
Time-Travelling Stool Could Address Diseases Linked to Your Gut
Health
Wearable Copper Could Protect You Against Bacteria and Viruses
Recommendations From Our Store
My Science ShopDiscover STEM Kits
My Science ShopDiscover 2022 Calendar
My Science ShopStrange Science
My Science ShopElements Flashcards
Shop Now
Stay Curious
Join
Our List