The Gray Area of Miscarriages in the Post-Roe World

Managing miscarriage has similarities to terminating a pregnancy, and with new state restrictions on abortion, physicians are afraid to provide necessary procedures. 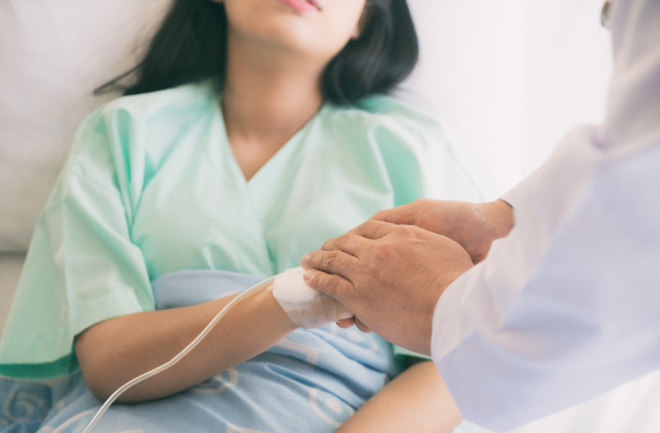 Naval officer Gwen was 14 weeks pregnant when she learned her baby had trisomy 13, a chromosomal condition her physician said was “not compatible with life.” Gwen, who was stationed in Japan at the time, was on the military healthcare program and had limited options.

The medical approach to managing a miscarriage is similar to terminating a pregnancy, which her military plan would not cover. With the military plan, Gwen’s only option was to wait until she reached 26 weeks and then deliver her baby stillborn. She described in You’re the Only One I’ve Told how she said hello and goodbye to her baby within the same moment.

Not having options while in the midst of an agonizing loss was traumatizing to the couple. And in 2022, state laws that now restrict abortion access have complicated how physicians care for patients experiencing a miscarriage. In some instances, patients have suffered complications because physicians are afraid to intervene and face accusations of providing an illegal abortion.

State laws that restrict or deny abortions have compromised how physicians provide care to patients experiencing a miscarriage. The overlapping medical terminology between miscarriage and abortion is one aspect of the problem.

“An abortion is a pregnancy that has ended,” says Meera Shah, the chief medical officer at Planned Parenthood Hudson Peconic. “An induced abortion is where there is medical intervention to stop the pregnancy from growing.”

Medical providers use the term abortion interchangeably with miscarriage. Spontaneous abortion refers to a miscarriage that occurs prior to 20 weeks of gestation. Several other terms explain the various stages of abortion. An inevitable abortion, for example, describes when the cervix is open and the fetus, or remains, are expected to soon pass through.

Spontaneous abortion is a common occurrence, and as many as 26 percent of pregnancies end naturally – for reasons physicians can’t always explain.

In some states like Texas and Missouri, restrictive abortion laws have failed to address and untangle the medical terms, which has had a chilling effect on physicians who treat patients with complications from spontaneous abortion. Both spontaneous and induced abortion also can follow the same care plan, which makes physicians and patients vulnerable to scrutiny.

Many patients experience a spontaneous abortion so early in their pregnancy that they don’t realize it occurred. “The reality is that many people miscarry and don’t realize it. They think it’s another period if they are really early on,” Shah says.

Some patients, however, experience heavy bleeding that needs medical management. In these instances, there are several options for removing the fetal tissue from the uterus. One option is to take a combination of prescription drugs. The first drug, misoprostol, causes the uterus to contract and release the fetal tissue. Physicians often give it along with mifepristone, a hormone blocker that stops progesterone production, which the body needs to support a pregnancy. The same drug combination is used for induced abortions.

Patients can also opt for a dilation and curettage (D&C). “We manually dilate with instruments to access the inside of the uterus. For cases below 16 weeks, we’ll use an aspiration technique, like a vacuum,” Shah says.

Physicians also use D&Cs for induced abortions. In some states, physicians are hesitant to provide D&Cs to patients experiencing a spontaneous abortion. Instead, they take a third approach, expectant management, in which patients are told to continue waiting until the fetal tissue passes naturally. Studies show patients who need interventions are experiencing complications during expectancy management.

State abortion bans have also limited how physicians can manage ectopic pregnancies in which the embryo implants outside the uterus. Although the fetus has no chance of survival, some physicians have had to wait until there are no signs of a heartbeat before providing medical care.

Shah says she is also aware of physicians needing approval from hospital administration before treating an ectopic pregnancy or needing another physician to sign off on the treatment plan before proceeding.

A July 2022 article in the American Journal of Obstetrics & Gynecology looked at two hospitals in Dallas County, Texas during two time periods — before September 2021 when state restrictions took effect and after.

Before the Texas laws restricted abortion access, if a patient experienced spontaneous abortion, counseling offered choices for removing the fetal tissue. Of the patients who met the criteria for needing medical care, 33 percent experienced a complication such as hemorrhaging or infection.

After the laws went into effect, patients were only counseled on expectant management. Of the patients who met the criteria for needing medical care, 57 percent experienced hemorrhaging or infections. And 20 percent had fetal parts or the umbilical cord sagging into their vagina.

The authors concluded that “state-mandated expectant management” significantly increased complications and put patients’ lives at risk. They questioned how near death a patient must be before the state allowed intervention.

“It’s taking complex medical decision making out of the health care providers and doctors, putting it in the hands of government and putting patients’ lives at risk,” Shah says. “It’s scary.”

Choosing What Music You Listen To Could Relieve Pain

More From Discover
Health
This is Your Brain Off Alcohol
Health
Is Crying Good For You?
Health
Social Isolation Increases Risk of Cardiovascular Issues
Health
For Vegans, Lifting Weights May Help Keep Bones Strong
Health
New Study Finds Men May Outlive Women Instead
Mind
Why We Experience Self-Doubt And How to Curb Those Feelings
Recommendations From Our Store
My Science ShopDiscover STEM Kits
My Science ShopDiscover 2022 Calendar
My Science ShopStrange Science
My Science ShopElements Flashcards
Shop Now
Stay Curious
Join
Our List