The Science Behind Cold Water Plunges

During winter, or throughout the year, people use cold water plunges for invigoration and health benefits. Are they onto something? 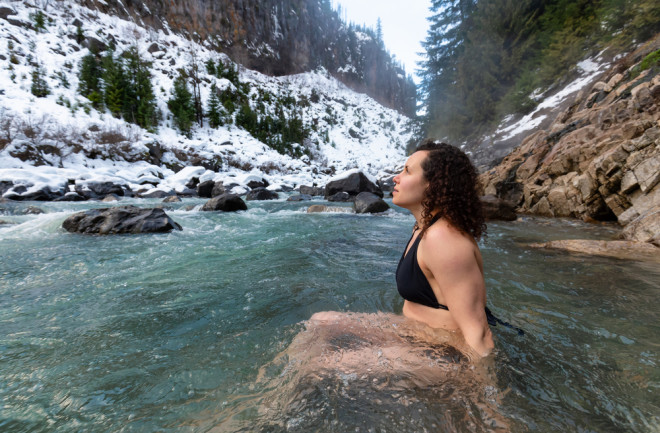 This article was originally published on May 10, 2021.

Whether it’s a wintery blizzard or blazing sun, MC Jenni has walked to the edge of the cold Montana creek near her home every day for the past 14 years. She disrobes, takes a deep breath, and gazes at the trees, water and rocks. Then she plunges into the icy current.

“When I go under and come up, everything is clearer. That moment of clarity is elating,” said Jenni.

Cold water immersion is an ancient practice that has roots in many different cultures, particularly those in high latitudes. Scandinavians have long lauded the post-sauna cold dip as a way to rinse off toxins, jump-start blood flow, and release endorphins. Even Hippocrates and Thomas Jefferson avowed the benefits of soaking in cold water — but is it worth it?

Jenni began her daily dunks as a way to relieve back and hip pain after hockey games. But she quickly realized that “playing in the creek” for a few minutes each day shifted her whole system in positive ways.

“Not only is it rejuvenating, it affirms that I have courage and self-will,” she explained. “It’s a process of reuniting with myself in a simplistic, primal way.”

Jenni used to worry that “someone might call 911 to report a woman standing on the edge of the ice taking off her clothes.” But now her neighbors wave when they see her walking with towel in hand, and a few have even started to sit in the stream themselves to reset their mind and body.

Swimming or submerging in cold water has gained popularity with the mainstream as a way to boost immune systems, build resilience to stress, and treat inflammation — especially during the pandemic as people search for simple, close-to-home ways to improve their wellbeing.

The Great Britain-based Outdoor Swimming Society grew from 300 members to 100,000 members in the past 15 years. There’s even a bi-annual Winter Swimming World Championship, which attracts over 1,000 competitors from 40 countries (March 2022 was at Lake Onega in Russia).

Plunging into an ice bath, a lake, or even standing in a cold shower has been touted to fix anything from anxiety to asthma. But aside from the many anecdotal affirmations, does science say that getting in cold water can actually make you feel better?

The short answer is yes. One study tracked 49 Finnish winter swimmers who dipped in cold water an average of four times per week. After four months, they reported a significant decrease in tension and fatigue, as well as an improvement in mood and memory compared to 33 non-swimmers. Plus, the swimmers who suffered from rheumatic diseases like arthritis or fibromyalgia reported pain relief.

Evidence also shows that cold water swimmers have more resilient immune systems. Researchers followed 85 Germans who regularly participated in cold water swims and found they contracted 40 percent fewer upper respiratory infections than a control group. The swimmers’ blood samples showed boosted antioxidant protection, which may be why they were better able to stave off illnesses.

Research now underway in the U.K. has found cold water swimmers also produce a protein that protects the brain from degenerative diseases like dementia.

The outlook is also rosy for how icy immersion might mitigate mental illnesses. A recent case study reported that a woman who had suffered from severe depression for eight years was able to stop taking antidepressant medication after swimming in cold water once a week improved her mood. Even cold showers have been shown to have antidepressant effects.

Read next: Can Breathing Like Wim Hof Make Us Superhuman?

The mood benefits reported after cold water immersion are likely because it activates the body’s “fight or flight” response. The shock of being blasted by cold water provides a quick, natural high by elevating levels of dopamine and norepinephrine in our brains.

Speaking of cold shock, it’s important to note the risks of cold water immersion. Plunging into frigid water is stressful on the body and can have harmful effects. Hypothermia, mainly. And in rare cases immersion can provoke cardiac arrest, arrhythmia, or respiratory distress, particularly in people with underlying health issues.

Plus, cold shock induces uncontrollable hyperventilating as the lungs contract, which can be alarming for first-timer plungers. Interestingly, that shock wears off the more you submerge in ice-cold water as the body becomes habituated to the experience.

The best bet for those who are interested in testing out the potential health benefits of  cold water immersion is to wade in slowly.

“I always listen to my body to see whether it wants to go in. It changes every day, just like the creek,” said Jenni. “I feel at home in cold water, but it’s certainly not for everyone.”

More From Discover
Technology
What Is a Social Media Cleanse?
Mind
What Psilocybin Psychedelic Mushrooms Are Teaching Us About Human Consciousness
Health
Is Vitamin C Actually an Effective Cold Remedy?
Health
Why Walking Might Be One of the Best Exercises For Health
Planet Earth
5 of the Best Winter Activities to Do in National Parks
Health
What Science Says About the Potential Healing Effects of Essential Oils
Recommendations From Our Store
My Science ShopDiscover STEM Kits
My Science ShopDiscover 2022 Calendar
My Science ShopStrange Science
My Science ShopElements Flashcards
Shop Now
Stay Curious
Join
Our List