Untangling Gender and Sex in Humans

Scholars reveal how sex and gender differ, where they overlap and why science needs to catch up to lived experiences. 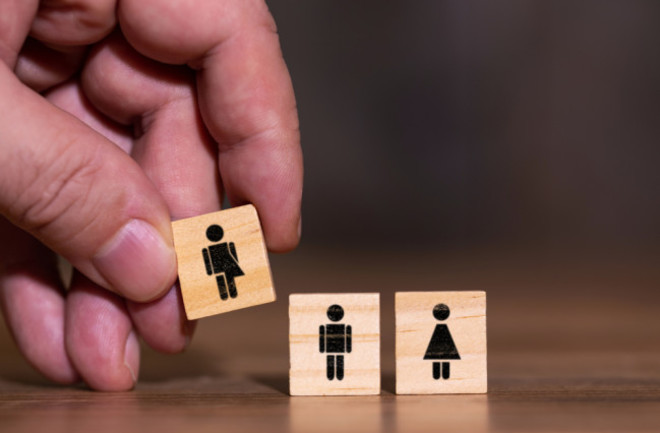 It’s now commonplace to see social media posts of cakes, balloons or clouds of smoke bursting with hues of pastel pink or blue, with exuberant parents-to-be in the foreground. This relatively new tradition is often called the 'gender reveal' of a developing baby. But experts say this ceremony is actually revealing the baby’s biological sex, as it’s based on external features. Gender is something else.

“Sex is the thing the doctor declares the day the child is born by looking at the child. Even though they use gender terms, what they mean is ‘this child is a male,’ or ‘this child is a female,’ which are sex terms,” explains Kristina Olson, a developmental psychologist at the University of Washington. “And the child's gender — I usually talk about gender identity — is the way that someone feels about their social category, whether they feel like they're a boy, a girl or something else.”

By these definitions, an ultrasound photo can’t reveal the gender of someone who hasn’t yet formed their own identity. Sarah Richardson, a feminist philosopher of science at Harvard University, also points out that gender can refer to the ways that others perceive us. It’s a social cue. “Gender could be talking about not just identity, but an individual's role or status. Being a mother is a gender role,” she says.

So, are sex and gender always separate things? And is it all written in our biology, or does society’s cultural expectations influence the relationship between them? Scholars are now pushing the limits of our knowledge, and building a more complete picture based on the latest findings.

It turns out that one of the biggest issues in studying sex and gender isn’t far off from the public’s confusion around the so-called gender reveal announcements. “In the field, we struggle mightily with the constraints of these paired constructs,” says Richardson. “We're often in incredibly uncertain terrain, where we're almost certainly dealing with aspects of both, or an entanglement that we can't completely clarify.”

The terms are so closely related that Sari van Anders, a social neuroendocrinologist at Queen’s University in Kingston, Canada, coined the new term 'gender/sex,' which is gaining traction in the field. Van Anders says she created the term because it felt important to highlight that scientists don’t always know which characteristic they are specifically testing, and rarely design their studies to separate them out.

As to why she put the word gender first, she explains: “Sex is something that's biological, and bodily evolved. But it can only be understood through a lens of gender. We never get to biology on its own. We always have to go through our humanness to get to it. And so in that sense, gender is really primary because it's the lens through which we see.”

Olson notes that both sex and gender are often talked about as if they are binary, meaning they consist of only two groups, but it's not that simple. “We like to simplify things, and unfortunately this is an example where we shouldn’t because we are ignoring the fact that there are human beings that don’t fit cleanly into those categories.”

In particular, Olson mentions that we sometimes recognize gender as more ambiguous and fluid than sex, but sex also blurs the lines. Individuals who are intersex, for example, can have external genitalia and internal genitalia that differ, and individuals with genetic syndromes can have an extra X or Y chromosome. One comprehensive review of medical studies published in 2000 estimated that nearly 2 percent of the global population does not fit within the biological male-female binary at birth.

Richardson describes the evidence for binary categories like this: When you pool across all humans and put them on one graph, you will generally end up with two large male and female peaks for sex, or two large man and woman peaks for gender. But you will also see lots of other little dots in between those peaks. This means there is not a strict binary, though there are two predominant categories. “So, people are not binary, but the constructs may fall out that way,” she says.

Having two large categories in the overall population can lead to assumptions about binary biological phenomena that don’t always hold up. Van Anders says that early on in her training, she was taught that hormone levels are different in men and women, and they do not overlap. But more recent work from her lab and others has shown that both testosterone and estrogen levels can be very similar in men and women depending on their age, diet, activity and stress levels.

“Hormonally, there's definitely not a binary,” she says. “So really, the question is: What would be the goal of making that binary? For science, there isn't one. Usually, [the binary] is there for political reasons."

Yet, van Anders notes that just because there isn’t a strict binary in biological systems like hormones doesn’t mean that sex differences don’t exist at all or that they don’t matter. Instead, science is starting to change how we understand sex and gender differences together as a whole.

“Things that we think of as sex differences between women and men might actually reflect, at least in part, some level of social influence,” says van Anders. Her lab has found that sexual thoughts can increase testosterone levels in women, and she explains that because women are often socialized not to think sexual thoughts, this is an example where our gendered socialization could be directly impacting our biology. Similarly, her lab found increases in testosterone during an experiment where women acted out competitive and authoritative behaviors, which she notes women are often culturally discouraged from doing.

“We think testosterone reflects biological differences between women and men, but it also could reflect these social norms that push women away from engaging in things that actually end up just increasing testosterone,” she says.

Anne Fausto-Sterling, a developmental biologist at Brown University, is studying mother-infant interactions to examine the early effects of sex and gender. She’s found that mothers tend to physically handle infant boys differently than infant girls; they pick up boys more, and hold them farther from the body (though she believes it’s an unconscious act). She hypothesizes that this can affect the developing nervous system of infants, such that what we might call sex differences in the brain could just be a result of different neural connections in response to different sensory input.

With such a complex and dynamic relationship between sex and gender, van Anders says there are many exciting questions to answer — though the field needs improvements. “Science is at its heart empirical, but people are ignoring gender diversity in a lot of their work in humans.” She also highlights that the science is still far behind many people's lived experiences. If the science eventually catches up, Richardson notes there will be an upside for all. “It will allow us to appreciate the incredible diversity to better capture and understand our own human nature,” she says. “When we exclude the diversity among and within sexes and genders, we create a science that is unjust.”

More From Discover
Planet Earth
How Intelligence Is Measured In The Animal Kingdom
Health
Your Guide to Conquering the Caffeine Crash
The Sciences
Céline Dion Reveals She Has Stiff Person Syndrome – An Expert Explains the Condition
Health
How Electroconvulsive Therapy Saves Lives
Health
What A Concussion Does To Your Brain
Health
Are the Effects of Cannabis and Alcohol in the Body the Same?
Recommendations From Our Store
My Science ShopDiscover STEM Kits
My Science ShopDiscover 2022 Calendar
My Science ShopStrange Science
My Science ShopElements Flashcards
Shop Now
Stay Curious
Join
Our List