Hunter-Gatherers Are Masters of Smell 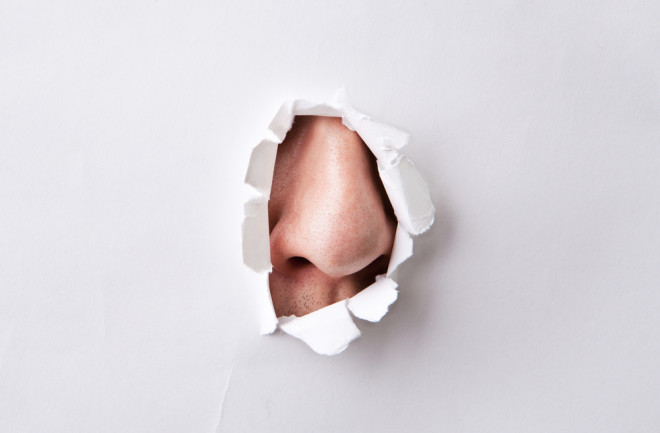 Sniff, sniff. (Credit: Shutterstock) What’s easier for you: identifying what color something is, or identifying a smell from a source you cannot see? If you’re like most people, color comes more easily. That, however, isn’t the case for all humans. According to a new study published Thursday in Current Biology, those who practice a hunter-gatherer lifestyle have an edge when it comes to naming a particular funk.

Evolving at the Speed of Smell

So why are people often better at describing what they see versus what they smell? Previous scientific studies have suggested it was an evolutionary trade-off: as humans evolved to be upright, vision developed to be more critical than smell. That imbalance between the two senses shows up in the way humans communicate. There are often more ways to describe a sight than a smell, and descriptions of smells often rely on similarities to other smells (for example, “This shoe smells like a banana!”). However, not all humans living today struggle when naming scents. Asifa Majid, co-author of the new paper, was a part of another study that ran smell tests of a hunter-gatherer people called the Jahai—who live along the Malay Peninsula that comprises parts of Thailand and Malaysia. Researchers found that, when tested, the Jahai name smells as well as they could name colors, something that a comparison group of English-speaking Americans could not. The two groups obviously differed in many ways, including environmentally, culturally and linguistically. So Majid and co-author Nicole Kruspe attempted to narrow things down by testing two groups more similar to one another, which is outlined in the new paper. The Semaq Beri and Semelai peoples, both living in tropical rainforests on the Malay Peninsula, speak languages from the same family as the Jahai. If language was the most relevant factor, they hypothesized, the two groups would be equal at naming odors. But if another factor—their way of living—were compared, then the hunter-gathering Semaq Beri would best the more sedentary Semelai in odor-naming tests. The latter turned out to be the case. “We were excited to find that the ability to name odors really seems to reside in being a hunter-gatherer,” wrote Majid in an email. “Neuroscientists have proposed that the limits of odor naming are the result of the way the brain is organized. Our findings show that culture is an important determinant of the ability to talk about smells.”

In the study, about 20 members of each tribe took part in controlled odor and color-naming experiments. For the smell portion, scientists gave each person marker pens filled only with odors, including garlic, coffee, lemon, peppermint and a dozen others. Villagers were tested in their native languages and asked simply what smell they were experiencing. The results of the study suggest that smells and colors are capable of being treated the same, linguistically-speaking. Any odor-naming difficulties may, in fact, be the result of brain connectivity issues. Smell and language center connections may be too weak, too direct or interfering with one another. Majid said the study raises many new questions about how humans differ in their smelling abilities. “It would be particularly exciting to see at which level these differences reside,” she wrote in an email. “Do hunter-gatherers and non-hunter-gatherers perceive odors differently as well, or is odor perception the same and differences only reside in the way that people talk about smells?” That study, she hopes, will be next. Editor's note: In a previous version we listed Asifa Majid as a he. Majid is a she. It has been updated.

Why Some People Love the Smell of Gasoline

Are Baking Soda and Baking Powder the Same Thing?

How Language Shapes Our Understanding of Reality

More From Discover
Mind
Calming Kids With Electronics May Affect Emotion Regulation Skills
Mind
Gut Bacteria's Role in Anxiety and Depression: It’s Not Just In Your Head
Mind
What Psilocybin Psychedelic Mushrooms Are Teaching Us About Human Consciousness
Mind
How Failing Could Actually Help us Succeed
Mind
Can Playing Video Games Make You Smarter?
Mind
Video Games May Have Negative Effects on the Brain
Recommendations From Our Store
My Science ShopDiscover STEM Kits
My Science ShopDiscover 2022 Calendar
My Science ShopStrange Science
My Science ShopElements Flashcards
Shop Now
Stay Curious
Join
Our List