Musicians' brains seem to excel at tackling new tongues due to their mastery of sound. And thanks to the nature of their training, vocalists may have a particular advantage. 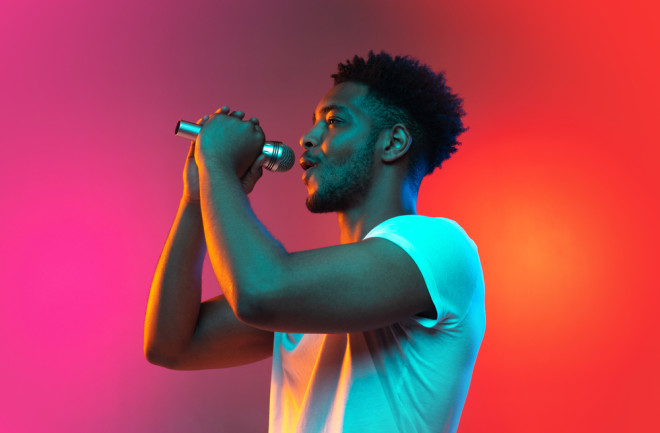 What’s the difference between Mozart and Pavarotti? Well, one was a child prodigy and composer who systematically learned the rules of music at an early age — the other, a pitch-perfect expert at mimicry.

Singers have a knack for foreign languages, most notably when it comes to pronunciation and accent because, like parrots, they mimic what they hear. It’s something that Pavarotti, who couldn’t read sheet music, did with his operatic singing.

“The singer is the best with the accent,” says Susanne Reiterer, a neurolinguistics researcher at the University of Vienna in Austria. “A foreign accent is a piece of cake for them.”

Studies reveal that Heschl’s gyrus, a type of ridge on the brain’s surface that contains the primary auditory cortex, plays a significant role in musical aptitude and language aptitude, especially when there are a higher number of gyri. So some researchers believe that, based on the structure of the brain, some are simply born to be musicians. “Talking uses the same biological makeup as singing, so it must be related biologically and neurobiologically,” Reiterer says. “It’s almost like two sides of one coin.”

C López Ramón Y Cajal, a descendant of Santiago Ramón y Cajal — the founder of modern neurobiology — found that the gyri are formed mid-pregnancy and continue to grow as the fetus develops, as reported in a 2019 Medical Hypotheses article.

Rehearsing and training over time have an impact on the brain, but Reiterer says biology also plays a leading role. “You can change a lot by rehearsing, but something is pre-given as well,” Reiterer adds. “It’s 50/50 genes and environment, and if you have a strong pre-disposition [musically] then you have more power basically in your auditory areas. You can discriminate sounds better.”

Even in the early 2000s, research suggested that long-term training in music and pitch recognition allows a person to better process the pitch patterns of a foreign language, a concept that Reiterer also explored in an Annual Review of Applied Linguistics article published this March.

Reiterer has also investigated how a person’s initial aptitude develops due to factors such as biological maturing, socio-cultural factors and musical ability, to name a few, as reported in a May 2021 Neurobiology of Language article.

“It’s the body that feels where I have to move my tongue,” Reiterer says. “And this feeling has a correlation in the brain, proprioception. That is the key to good pronunciation and the key to a good singer.”

So, for those tapping into both language and music — things just click.

The ‘Pavarottis’ Putting It Into Practice

Eli Zaelo, the first Black woman in history to write and release music in Mandarin, can speak to this phenomenon. The South African singer grew up listening to the diaphragm-savvy artists Beyoncé and Whitney Houston, and she speaks English, Afrikaans, Tswana, Zulu and Mandarin.

“[With] singing, I don’t really have a limit,” Zaelo says. “Once I connect to the meaning of the song, then I can challenge myself to sing it.”

A musician’s ability to recognize pitch could be especially useful when learning tonal languages like Mandarin, Cantonese, Thai, Zulu or Punjabi, as tonal language speakers were found to have a better ear for learning musical notes.

“I would say music is the foundation for me to learn languages. Once the melody comes in, then it just becomes easier for me,” she explains.

Singer-songwriter Nina Joory was motivated to learn Spanish to connect with others in the industry. “Music pushed me to learn Spanish,” she says. “I was hungry for it, you know? I was eager to be part of this huge movement that is Latin music right now.”

This hunger or desire to continue to learn a language may relate to something researchers refer to as the “pleasure loop,” or “compulsion loop,” meaning that a person will continue to perform an action to evoke feelings of pleasure and receive the dose of dopamine it releases in the brain. In this case, language learners may have more motivation to continue, especially if they have successful experiences. “It seems language and music at the same time make people somehow happy,” Reiterer says. “You get a neurobiological reward by knowing things.”

While studying at Berklee College of Music, Joory grew interested in Latin pop and reggaeton. With English, Portuguese and French already under her belt, the Brazilian-Swiss singer turned to her classmates for help with Spanish. A year or so later, she was conversing and writing songs in Spanish, and eventually releasing music videos in the language.

Like Joory, multilingual singer Daniel Emmet is already working on his next tongue.

Based in Las Vegas, the classical crossover artist grew up listening to Andrea Bocelli, Josh Groban and Lara Fabian, who tend to sing with tall “ahs,” rounded “ohs,” and crisp diction. And in 2018, he competed for national recognition on America’s Got Talent. Now that he’s releasing new music, Emmet is exploring new ways to give the classics a twist.

“Something that I’ve always loved doing is taking popular music in the U.S. and performing them in a different language,” he says. “It can add new depths that maybe weren’t there before.”

Emmet feels musicians and singers have a leg up in understanding the nuances of a language. And science says he’s right. Even passive musicians who have the ability to discriminate sounds but may not have the time or resources to extensively train can use this to their advantage, according to Reiterer.

“From the perspective of a singer, because languages are so sound-driven, it’s all vocal work,” Emmet says. “With all the ear training that we do, I think that really gives us an unfair head start into learning a new language and connecting the dots between all those sounds and how they work together.”

Though he sings in seven languages, Emmet says he’ll always be in a state of learning.

For these multilingual musicians, language helps them see the world as they tour, produce new work, and meet other songbirds. It seems that in a world full of rule-followers, it pays to be a Pavarotti.