The myth of left- or right-brained dominance has become a convenient way to explain away our personality quirks, but these neuroscientists are setting the record straight. 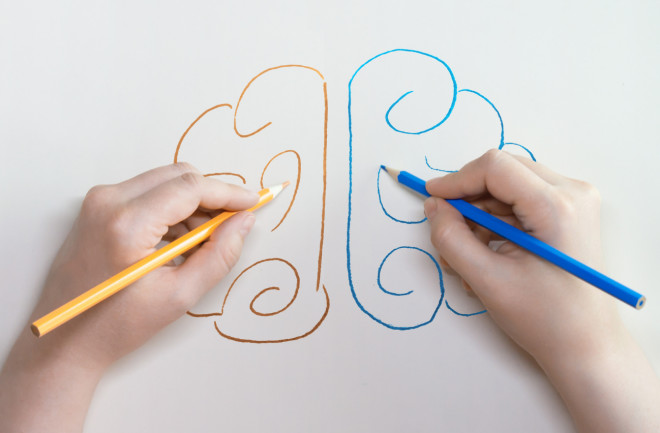 There are hundreds of personality quizzes online that claim to tell you, based on criteria ranging from your preference in paintings to your reported ability to recall names and faces, whether the right or left half of your brain is dominant. Left-brained people, the quizzes will tell you, are logical and excel at language and math; right-brained people are more imaginative, emotionally intelligent and skilled with spatial reasoning. There’s just one problem: That’s not how brains work.

“Popular science enthusiasts sort of took this idea and ran with it, and it's just become enmeshed in popular culture now, and it's not going away. But it's not true,” says neuroradiologist Jeff Anderson. He would know — he’s the senior author of a 2013 study from the University of Utah that used MRI to analyze brain activity across hemispheres.

Despite this enduring belief, there’s no such thing as being “right-brained” or “left-brained.” Whether you’re someone who tends more towards creativity or logic has nothing to do with one hemisphere of your brain being dominant over the other. But the actual science of how the two halves of our brains work together is sometimes stranger than fiction.

The human brain is divided into two hemispheres, the left and right. In all vertebrate animals, the right hemisphere controls the left side of the body and vice versa. (Although the jury’s still out on why that is.) And scientists have long known, thanks to the behaviors of patients who suffered brain injuries, that the different areas of the brain do different things.

Several 19th-century neurologists, for example, noted the presence of lesions in the left frontal lobes of several patients with speech disorders. Broca’s area, the language center of the brain, was thus named after the most famous (but not the first) scientist to document this connection.

But Paul Broca struggled with his finding, because the very suggestion that the left and right halves of the brain operate differently disrupted the idea that nature tends toward perfect symmetry, says Peggy Mason, a neuroscientist at the University of Chicago. “Today, we know that this is simply a fact, that the left hemisphere is primarily responsible — it doesn’t work alone — but is primarily responsible for the learning and production of language,” she says.

The two hemispheres are joined by a dense highway of nerves running down the middle of the brain. Called the corpus callosum, this highway is what enables the two halves of the brain to communicate with each other. In the early- to mid-20th century, some physicians attempted to control seizures in their severely epileptic patients by surgically severing the corpus callosum — and thus disrupting the electric impulses traveling from one hemisphere to the other. The procedure, which is still sometimes performed today, did reduce seizures. But its side effects revealed unexpected truths about how the two halves of the brain work together.

In the 1960s, California Institute of Technology neuropsychologist Roger Sperry and doctoral student Mike Gazzaniga worked with four so-called “split-brain” patients who had undergone this surgery. They found subtle but surprising differences in the way the patients processed the world around them.

In one experiment, Sperry and Gazzaniga gave the patients a spoon to hold in their right hands and asked them to identify the object without looking. Because the right hand is controlled by the left hemisphere of the brain, which contains Broca’s area for language processing, the patients had no problem explaining what they were holding. However, when they held a pencil with their left hand (controlled by the Broca-less right half of the brain), the patients could no longer identify what it was. Meanwhile, patients were better at reproducing drawings with their left hand than with their right, indicating that the right brain plays an important role in spatial reasoning.

“If you have a focal lesion either in the right hemisphere or the left, you will get deficits in those domains,” says Gazzaniga, now the director of the SAGE Center for the Study of Mind at the University of California, Santa Barbara. “What was shocking was to see not a deficit but simply a disconnection — one side didn’t know what the other was doing. That was a startling breakthrough.”

A Kernel of Truth

Sperry and Gazzaniga’s work revealed the importance of different hemispheres of the brain for different activities and the role of the corpus callosum in sharing information across hemispheres. However, their research quickly saw some misinterpretations in the general public: Some postulated that creative people must be right-brained and logical people must be left-brained. That theory, in Gazzaniga’s words, is “just wrong.”

Researchers like Anderson have demonstrated that not only is personality unrelated to the different halves of the brain, but people aren’t really right- or left-brained to begin with. “The idea that we have left-dominant people and right- dominant people, and that [this] is related to personality, is categorically false. That's never been supported in the neuroscience community. Neuroscientists don't believe that and never have.”

However, Anderson, who is now a neuroradiologist in Oregon and an associate professor at the University of Utah, notes that “oftentimes, when you have even something that may not be correct in popular culture, sometimes there's a kernel of truth there and it's worth looking at things from a more rigorous perspective.”

In their 2013 study, Anderson and his colleagues conducted statistical analyses of over 1,000 brain scans. “In every individual, there would be some connections that are stronger in the left hemisphere and some in the right. And that varied on a connection-by-connection level,” he says. “People had roughly equal mixes of both. When you average it out, it wasn’t the case that one individual would tend to have stronger connections on the whole in the left hemisphere.”

Ultimately, he says, “what we learned is that there are really important differences between the left hemisphere and the right hemisphere. It's just that they have nothing to do with personality or whether cognitive strategy is more logical or free spirited or creative.”

It’s also worth noting that handedness isn’t connected to one half of the brain being dominant over the other either (i.e., lefties aren’t right-brained). Similarly, there’s no set of personality traits or skills that go with being right- or left-handed. Though there are some differences in brain scans between lefties and righties in terms of how their brains work, says Silvia Paracchini, a neurogeneticist who studies the origins of handedness at the Institute of Neural and Behavioral Sciences at the University of St. Andrews. For instance, among strongly left-handed people, a higher number use parts of their right brain for language processing. These differences are pretty minimal, however.

While researchers have shown the limitations of how the hemispheres of our brains influence our lives, Anderson understands the appeal of such ideas. “People are endlessly fascinated by themselves and our friends, and these subtle differences in how we think about the world are really important and meaningful to people. When you come up with a listicle or an online quiz that tells us something about ourselves, we're drawn to that. It’s irresistible,” he says. “It's still a way of thinking about people and classifying people in ways that might be interesting or helpful. You just have to take it with an enormous grain of salt.”