Why Are Americans Getting Unhappier?

It’s not just the pandemic. And the news is not all doom and gloom, either. 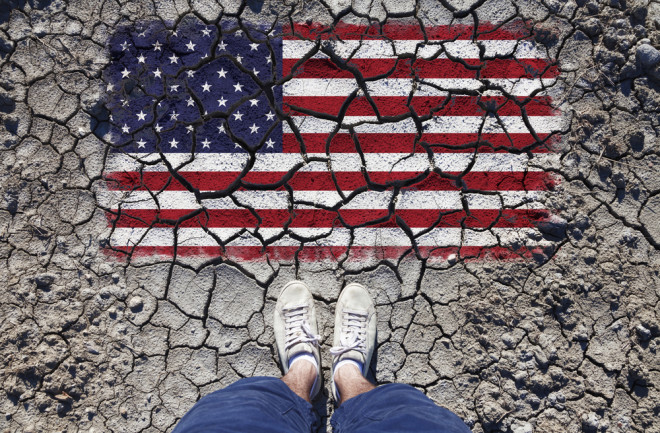 Dystopia is a country where everyone is unhappy. With the lowest income in the world, the least freedom, the lowest life expectancy, least social support, and most corruption, they’re actually the worst country in the world.

Dystopia, as it happens, doesn’t actually exist — except as a reference for other countries in the World Happiness Report, a global collaborative survey that ranks the earth’s happiest and unhappiest inhabitants. And the United States isn’t anywhere near as miserable as Dystopia —  but they may be inching closer: in the first year the World Happiness Report was published (2012), the United States came in 11th. But the most recent report finds the U.S.A. down eight happiness rungs, to the 19th position.

What’s more, results from the COVID Response Tracking Study, based on data from the General Social Survey, reported in May that Americans were the unhappiest they’ve ever been — 23 percent reported they were “not too happy” — the lowest portion since the survey started in 1972.

In reality, Americans aren’t particularly sad compared to the rest of the world — in fact, they’re objectively among the happiest. The United States ranks 19th out of 149 countries, after all. But whether it’s because the U.S. is the wealthiest country in the world; or because of that relentless optimism Americans are known for worldwide; or a widely held belief (by Americans) that America is innately different from the rest of the world, scholars and politicians have wondered why this country isn’t at the top of the list.

COVID-19 may be responsible for much of the drop. But more than a global pandemic, a mix of economic, social and cultural circumstances have joined together over time to create a particular kind of American discontent. And though Americans still enjoy relatively happy existences, there are ways they can do better.

The impact of COVID-19 might explain some of the downward happiness trends America has been seeing. Increased loneliness, uncertainty and joblessness have made American problems, and other problems, much worse. American life satisfaction took a tumble and kept falling after April of 2020, and “negative affect” (a measure of emotions and self-concept) began to crawl up. Then the COVID Response Tracking Study found that more Americans than in the past were pessimistic and unhappy about the future.

But COVID-19 can’t explain the trend Americans have experienced since long before the pandemic hit — according to a number of sources, they’ve been trending downward for years.

“We're always convinced we're exceptional. And now it seems to me we're exceptional in our stupidity more than anything else,” says Carol Graham. Graham is a Senior Fellow at the Brookings institute, a think tank specializing in social sciences; Graham’s expertise is in measuring American wellbeing.

“We were the only rich country in the world prior to COVID where mortality rates were going up rather than down,” Graham says. “And that was due to deaths of despair in less than college educated middle aged whites.” Suicide, drug overdose, and liver disease from alcohol are typically known as “deaths of despair” because they happen more in groups with little hope for improved economic or social conditions.

Meanwhile, non-white Americans, who spent centuries battling discrimination in American workplaces, economies and society, built informal networks of support in extended family or religious institutions. They prioritized higher education as a way to improve life. In fact, while Black and Hispanic Americans (two major groups for whom census data is gathered) still face higher student loan debt, healthcare disparities, and higher rates of poverty, they are more optimistic than ever before.

But as rural, white communities continued to hang on to the American dream with fewer and fewer prospects, they saw their own belief system crumbling.

“The group that most believe, hook line and sinker, ‘you work hard to get ahead, you don't want government support, government support’s for losers,’ all of a sudden needs collective support, needs all sorts of things, and doesn't have those natural, informal social linkages,” Graham says. And because America is still majority white, American unhappiness went down overall.

This isn’t the first time social scientists have pointed toward American economics as the root of American unhappiness. Mihaly Csikszentmihalyi, a psychologist at Claremont Graduate University who was known for his work on happiness and creativity, wrote back in 1999 about capitalistic measures of our own success,

“Nowadays the logic of reducing everything to quantifiable measures has made the dollar the common metric by which to evaluate every aspect of human action,” Csikszentmihalyi wrote. Because our sense of self in America hinges on how much we are worth in a market, he argues, we expect and depend on material rewards to make us happy. And they don’t.

Study after study has shown that monetary gain doesn’t bring emotional wellbeing. A higher income can increase happiness temporarily, but people quickly adjust by moving their personal benchmarks up.

Economics, however, may not tell the entire story of American discontent. Tied up in the classic narrative of hard work, material payoff and more recently, workaholism, is a reliance on the individual and not the group. In one study on the US, Russia, Germany and East Asia, researchers found that those in cultures that value collectivism versus individualism tended to be more successful in pursuing happiness because of an emphasis on social engagement.

Helliwell describes speaking to executives in Denmark, the second happiest country according to the World Happiness Report, about their workplaces, which he described as more collaborative and communal. “They share the same lunch room, they share the same conversations about what to do to make a better product, knowing about what's going on in the other's families,” Helliwell says. Pay was also, crucially, more equal. That is, the gap in pay between the highest- and lowest-paid workers at a company was relatively small. “These flat structures are happier places to work. And they're often more effective.”

The United States, on the other hand, is one of the most unequal rich countries, and the most unequal of the G7 nations, according to the Pew Research Center. Inequality, which the World Happiness Report uses as one of the strongest measures of social trust, plays a big role in happiness. Access to healthcare and education is also unequal, Helliwell adds. “Despite lots of people's efforts, it probably is less equal than it was 50 years ago. And that has consequences.”

It may not be that inequality would affect individuals in a vacuum. After all, if we didn’t know how well-off Jeff Bezos — or even our neighbor — was, we might not care. But the feeling of relative scarcity, that one has less compared to others, is a powerful one. And we’re not just limited to our neighborhood or commute in absorbing what others have — social media, with its roots in America, allows us to be bombarded with it at all hours of the day.

“That idea of wanting to have a better car, or a better backdrop for your vacation photo, or your wedding is probably more prevalent in the United States than elsewhere,” adds Helliwell. And a growing body of research supports this phenomenon. One study found that more Facebook, Instagram and Twitter use resulted in less well-being, while the opposite was true of real, face-to-face social interaction.

There’s also much less bullying and arguing. “Once people get a chance to meet each other and sit down and talk together,” says Helliwell, “they're much less likely to even consider the option of saying negative things about each other or act in negative ways. Social media has a built-in distance.”

And, Helliwell points out, mass media has a way of overreporting the bad and exaggerating perceptions of danger and mistrust. But it’s not all doom and gloom. Helliwell says that based on findings from the World Happiness Report, COVID-19, surprisingly, allowed people worldwide to see more examples of people helping one another out.

“People are now acutely aware that there are people who need help. And what's more, they're doing something about it,” Helliwell says. “People who are not going to Brazil on a mountaintop on their holidays, but are walking in their block and meeting their neighbors, ended up getting happier.”