4 Ways Animals Adapt To Life In The Rainforest

From camouflage to mimicry, animals and insects use many tactics to survive — and thrive in tropical rainforests. 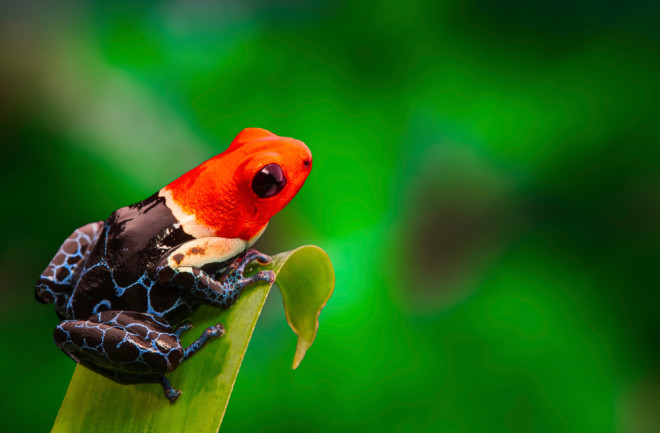 The rainforest is a feast for the senses. From the loud hum of insects and calls from birds and other animals to the earthy aroma from the forever dampened soil — researchers who spend time in this habitat describe it as a restorative and invigorating place. It’s also teeming with life. Though rainforests cover only 6 percent of the earth’s surface, it’s estimated they contain at least half of all the animal and plant species in the world.

In such a warm, humid and biodiverse environment, animals have developed many adaptations to keep them cool, find food and avoid prey. Here are four adaptations and the animals that use them.

Camouflage is a tool that insects and animals use as a defense mechanism. If they can blend in with their surroundings, they can hide their movement and location.

“In regions with such intense biodiversity, it’s often the diminutive and unassuming that have really fine-tuned the art of survival,” says animal expert and TV personality, Jarod Miller, who’s rainforest travel includes the Peruvian Amazon, Equatorial Africa and Southeast Asia. “The ability to make yourself invisible is commonly the secret to success.”

For example, Miller notes that stick insects famously replicate their surroundings perfectly to blend into their environment.

“In addition to possessing the identical coloration of their micro-habitat, stick insects have evolved structural alterations and extremities to exactly replicate the species of plants and trees they live amongst,” Miller says.

Tropical rainforests are near the earth’s equator and as a result, have warm, balmy weather year-round. While fur may not seem conducive to such an environment, it helps protect the skin of animals as they travel through the forest.

For example, the sun bear, a bear known for its small, cub-like size, and impressively long claws, gets by with little fur. “Their fur is noticeably short and sleek, but thick and coarse,” says Jordan Schaul, a former member of the International Union for Conservation of Nature Bear Specialist Group who has extensive experience working with sun bears. “The short length protects them from overheating and their dense fur protects them as they move through heavily forested habitat and from tropical rains.”

Sun bears also lack hair on the soles of their feet, which helps them move quickly through the trees to escape predators. These hairless soles only work for a rainforest environment, though, Schaul notes.

“You can’t have hairless soles in a temperate or polar environment where the ground or water freezes. This is especially true if you aren’t physiologically equipped to hibernate,” Schaul adds.

Other furry animals, such as the orangutan, exhibit low body fat to get by in the heat, according to Kimberly Nguyen, an anthropology professor at Niagara County Community College in Sanborn, New York.

Some animals need to rely on ingenuity to survive in the rainforest. And besides traveling through the trees, the orangutan can also create tools that help them adapt to the rainforest environment.

“They are beautifully adapted for the environment,” says Nguyen. “It’s like seeing a massive linebacker and then finding out he is a wonderful dancer,” Nguyen adds. While male orangutans, which average at around four feet and 200 pounds, can still fall, their tree-swinging skills would still put many humans to shame.

The orangutan can also make a variety of tools, including fashioning makeshift shades out of leaves to protect themselves from the elements. During a trip in Borneo, Nguyen and two guides traveled in a boat through a peat swamp and a young male orangutan peered down at their group from a tree. The group laughed when they saw the ape was wearing a hat assembled from some leaves.

“Then a sudden downpour sent us scrambling to cover equipment,” Nguyen says. “I like to imagine that [the orangutan] adjusted his leaf hat and chuckled.”

Some rainforest animals use poison for their protection. One famous example is the poison dart frog, which releases a harmful chemical that could kill a human within minutes, according to Miller.

“It's absolutely remarkable that a beautiful creature the size of your fingernail produces a neurotoxin so potent,” Miller adds.

There are also animals that imitate venomous predators to protect themselves. For example, brightly colored milk snakes and kingsnakes borrow their patterns and colors from the highly venomous coral snake.

“Instances of mistaken identity by potential predators have kept these species safe for thousands of years,” Miller says.