5 of the Strangest Looking Flowers

From monkey faces to tiny skulls, the strange shape of flowers has no limits. 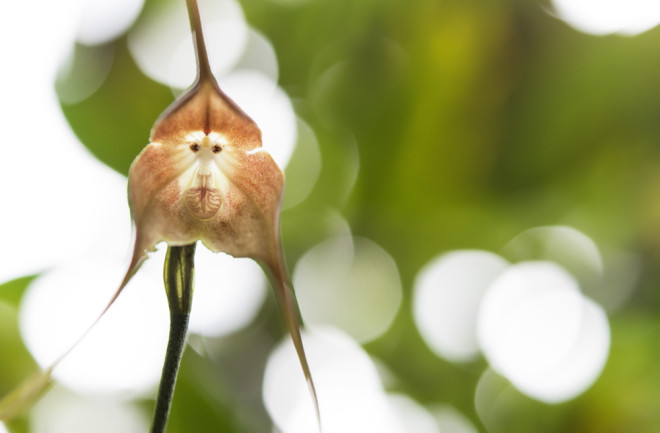 The natural world is full of interesting and odd-looking organisms. In the animal kingdom, there’s the unusual hairless rat and the aptly named blobfish, — the world’s ugliest animal since 2013. There are also many floras with unusual appearances. Including a cactus whose shape resembles a brain and a variety of impatiens that look like dancing girls. There’s even a psychedelic plant called “Hooker’s Lips,” due to their bright red flower petals — a traditional Valentine’s Day gift in Central America.

While these flowers may look odd, there are some in the plant kingdom that are out of this world. Let's look at five of the strangest-looking flowers.

Ophrys apifera is commonly known as the bee orchid and it’s easy to understand why. In a notable example of mimicry, this flower resembles a female bee. They look so convincing that male bees are drawn to the flower to mate. When they land, pollen is transferred to the bee, which they inadvertently transfer to other bee orchids — furthering the life cycle of the flower.

Due to a lack of bees in their natural environment (in the U.K.), this orchid’s typically self-pollinates. Meaning that it transfers pollen from its own male parts to its female parts to pollinate. This isn't uncommon, typically 10-15 percent of plants are considered self-pollinating.

Native to subtropical Africa, the Strelitzia reginae was named after Queen Charlotte of England. She was an amateur botanist who spent a lot of time in Kew Gardens, and Sir Joseph Banks honored her with the flower naming in 1773. Sporting up to 36 flower spikes, the bird of paradise can bloom all year and grow up to six feet tall. With its blue petals and orange sepals, the flower looks like a bird in flight.

The way the petals are shaped and protrude from the flower bud gives rise to another nickname: the crane flower. Bird of paradise is a popular plant in Hawaii, Florida and Southern California. They are even the official flower of Los Angeles.

Found growing in Southeast Asia, the world’s largest flower (Rafflesia arnoldi ) smells like rotting flesh, earning it the name the corpse flower. Reaching a size of three feet in width, this flower is an anomaly in several ways. It has no leaves, stems or roots. It’s a parasitic plant that’s only visible when it emerges through the vines of its host — part of the grape family known as Tetrastigma.

The corpse flower is unusual in other ways: Because it lacks chlorophyll, it doesn’t go through the photosynthesis process, nor does it normally kill its host. These giant flowers only live about a week once they bloom. There is another well-known corpse flower, called Amorphophallus titanium. Sporting a tall green spike from its center, this flower resembles a calla lily on steroids.

The Dracula Simia is better known as the monkey face orchid. These rare flowers grow at high altitudes of 1,000-2,000 meters (3000-6000 feet) above sea level and are native to Peru and Ecuador. They can bloom at any time, during any season — and when they do they smell like oranges.

Some people believe that the word “Dracula” in the name refers to long spikes that resemble fangs, which are found at the end of their petals. Although there are over 110 varieties of varying color, size and petal patterns, all have a distinctive monkey face shape formed by the way the petals intersect.

There are several myths associated with the flowering Antirrhinum plant — colloquially known as the snapdragon. Some cultures believed the plant had mystical powers that would bring good luck to those who carried them around, while others thought that hiding a snapdragon in their clothes made people gracious and cordial.

In the Victorian era, they symbolized mystery and suspicion. Native to the Mediterranean, Snapdragons can vary in height from less than a foot up to three feet tall. When in bloom, the flowers are beautiful and colorful — making them a popular addition to gardens. However, when the flowers die, the seed pods look like tiny human skulls, adding a touch of morbidity to your garden.