A New Eruption Might Be in the Works in Southern Iceland

Signs of an eruption are brewing under the Reykjanes Peninsula in southern Iceland. 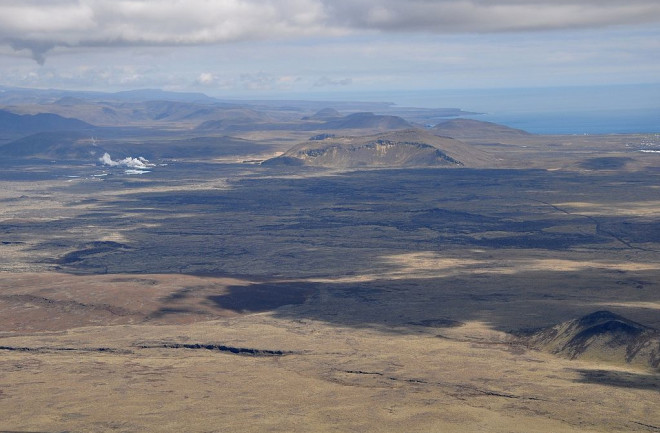 A view of the lava flow field on the Reykjanes Peninsula, with the Svartsengi geothermal station visible in the background. Credit: Vincent van Zeijst, Wikimedia Commons.

It's been a while since we saw an eruption in Iceland. For the small volcanic nation in the middle of the North Atlantic, that means something very different than most countries. It has been almost five years (gasp!) since the last Icelandic eruption (hint: that's not long).

Now, that last eruption was a doozy, producing almost a cubic kilometer of lava at the Holuhraun Lava Field north of Bardarbunga. However, signs of a potential new eruption are building, this time in the southern part of the island.

Iceland is unique for a number of reasons. Much of the volcanism there is caused by a hotspot -- a plume of hot mantle material -- rising up underneath the island. However, unlike Hawaii which is only a hotspot, Iceland also lies on the Mid-Atlantic Ridge. This is a long seam down the middle of the Atlantic Ocean where the North American and Eurasian plates are born, pushing those continents away from each other.

A map of Iceland, showing the split between North America and Eurasia along the Mid-Atlantic Ridge. The Reykjanes Peninsula is marked as RVB. Credit: Wikimedia Commons.

Normally, the mid-ocean ridge is under thousands of feet of water. But in Iceland, thanks to that added boost of hotspot volcanism, there has been enough lava erupted to create an island where the Mid-Atlantic Ridge shows up on land. So, the eastern part of Iceland is on the Eurasian Plate and the western on the North American plate ... and the whole island is slowly growing in both directions!

Some of the volcanoes in Iceland are being driven more by the hotspot, some more by the spreading at the Mid-Atlantic Ridge. By Reykjavik, in the country's south-west, the volcanism is dominated by the mid-ocean ridge and there are a multitude of geothermal areas along the Reykjanes Peninsula that betray the arrival of the Mid-Atlantic Ridge on land.

It has been some time since an eruption on the Reykjanes Peninsula. The whole southwest tip of the peninsula is a long chain of volcanic vents, including the submarine volcano Reykjaneshryggur, which last erupted in 1831. This volcano lurking just off the coast has erupted numerous times over the past millennium, including some impressive explosive eruptions that spread layers of ash across parts of Iceland.

You have to go back to 1210-1240 AD for the last eruption on land from the Reykjanes volcanic system, a period called the "Reykjanes Fires." Most of these eruptions have been basalt lava flows that issued from systems of cracks in the ground (fissures), like the Arnarseturshraun lava that released about 0.3 cubic kilometers of lava. This style of eruption is by far the most likely to occur if something does happen on land at the Reykjanes Peninsula.

Signs of a New Eruption?

In late January, the Icelandic Meteorologic Office (who also monitors the nation's volcanoes) reported two meaningful changes in the southwestern region of the peninsula near Grindavik. The land surface has been inflating significantly for the first time since such measurements have been taken and a large earthquake swarm also occurred

Earthquakes over the second half of January near Grindavik in Iceland. Credit: Icelandic Meteorological Office.

First, the inflation. Right now, the land is rising at a rate of about 3-4 millimeters per day and has racked up as much as 2 centimeters of uplift already. This inflation is potentially being driven by magma rising up under the area at a depth of a few kilometers. The IMO thinks that, as of now, it isn't much magma — maybe 0.001 cubic kilometers — but still something is changing.

Coming with this inflation are earthquakes. Hundreds of relatively small earthquakes have been recorded to the northeast of Grindavik, with the largest earthquakes hitting ~M4.3. It is the combination of inflation and earthquakes that caught the attention of the Icelandic volcanologists.

So far, this isn't any clear evidence of magma near the surface according to the IMO. The inflation has slowed and so have the earthquakes. However, the events leading to a new eruption don't need to be a straight progression. They can start and stop as magma rises from beneath.

UPDATE February 7, 2020: The IMO released a new statement today that downplays the eruption potential: "The most likely explanation of the uplift and earthquake activity is that a magmatic intrusion is located at 3 to 5 km depth just west of Þorbjörn. It is most likely that this activity will stop without an eruption." So, the wait may continue!

Should an eruption start, the most likely form it will take is lava flows. They could last for days to weeks, possibly longer. Alternatively, all this inflation and shaking could merely be caused by heating of the active system of hot fluids under the peninsula (part of which supplies Iceland with its abundant geothermal energy). It could even be simply tectonic, driven by the separation of North America from Eurasia.

However, that combination of inflation and earthquakes grabs volcanologists' attention. Rising magma takes up space, so the land will rise and crack as magma pushes its way in. The signs that this could be happening are currently evident under the Reykjanes Peninsula. But the question remains whether it will lead to a new eruption for Iceland.

Sizing Up Last Year's Eruption in the Canary Islands