A Rare Snake’s Final Fight With a Centipede

Researchers recently analyzed the carcass of one of the scarcest species of snake with a centipede caught in its throat. 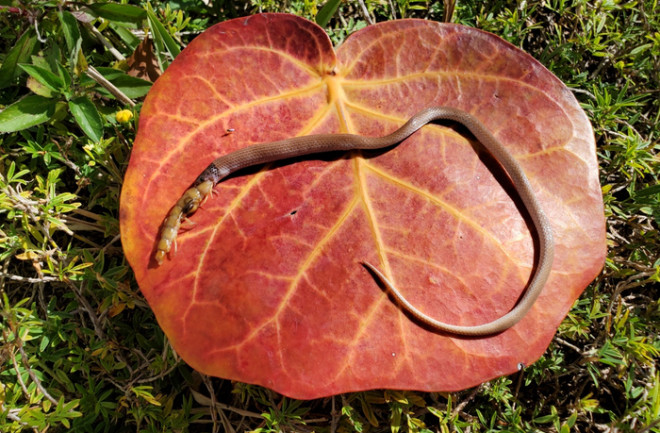 As it turns out, threatened species aren’t afraid of a fight. According to a new paper, researchers found a strange rim rock crowned snake specimen in the pine rocklands of Florida for the first time in four years.

Stranger still is that this rare species of snake, died with a centipede trapped inside its throat — forever stuck in a fierce battle.

Though the pine rocklands covered much of Florida and the Florida Keys for millions of years, the region has since shrunk as a result of human habitation and activity. This has almost annihilated many of its unique plant and animal species. Among these unique species is the threatened Tantilla oolitica, also known as the rim rock crowned snake. This snake, scientists say, is the rarest snake in all of North America and is potentially teetering on the verge of vanishing once and for all.

The new specimen of T. oolitica, which has now been thoroughly imaged using CT scanning technology, reassures experts that the species still survives. It also offers new insights into the species’ body, behavior and diet, presenting the first real proof of the snake’s dramatic centipede dining.

“I was amazed when I first saw the photos,” says Coleman Sheehy, a study author and collection manager at the Florida Museum, in a press release. “It’s extremely rare to find specimens that died while eating prey, and given how rare this species is, I would never have predicted finding something like this. We were all totally flabbergasted.”

A visitor initially spotted the specimen along the side of a state park trail on the Key Largo island in the Florida Keys. A team of researchers were ready for a detailed analysis once the specimen arrived at the Florida Museum.

Though the researchers immediately considered asphyxiation as a cause of death, this condition is relatively rare among snakes thanks to their flexible jaws and their ability to swallow prey several times bigger than their own bodies. So, in an attempt to solidify the specific cause of death, the research team implemented state-of-the-art scanning technology to take a closer peek inside the snake without causing any sort of irreversible damage to the specimen itself.

“We were able to perform a digital autopsy, which allowed us to examine the centipede and snake, including its injuries and gut contents, without ever picking up a scalpel,” says Jaimi Gray, another study author and researcher at the Florida Museum, in a press release.

Taking the results of this “digital autopsy,” the team then constructed a detailed virtual model of the snake and semi-swallowed centipede. Though the model indicated a small injury on the side of the snake’s body, probably delivered by the powerful pinchers of the centipede, the deciding factor behind the fight (and behind the snake’s subsequent death) seemed to be the sheer size of the centipede. In fact, the researchers say that the centipede’s body blocked the snake’s windpipe completely, cutting off the threatened creature’s supply of fresh air.

Ultimately, the preserved condition of the specimen and the detailed CT-scans provide plenty of room for future research on other aspects of the snake’s anatomy and to make new discoveries about the strange, scarcely known snake.

“This study is just the beginning of what will be learned about this enigmatic species,” Sheehy concluded in a press release.