Asexual Reproduction is Surprisingly Common in the Animal Kingdom

Not all creatures need to breed to produce offspring. Animals like zebra sharks and killifish are redefining what scientists thought they knew about asexual reproduction. 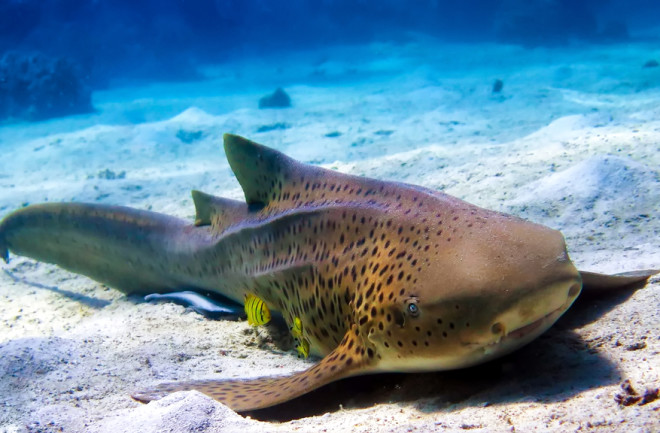 Though humans and mammals have to rely on sex to procreate, many animals have other options. Sea stars, wasps, marbled crayfish, jellyfish and ants are just a few species that can reproduce asexually.

Among vertebrates, or animals with backbones, asexual reproduction is more rare. However, California condors, New Mexico whiptail lizards and certain fish all reproduce via a process known as parthenogenesis — a Greek word whose two roots translate to "virgin creation."

The Benefits of Asexual Reproduction

Why do these animals choose to forgo sex and lay eggs containing, essentially, clones? According to Anne Marie Dion-Côté, an evolutionary molecular biologist at the Université de Moncton in Canada, there's a better question to ask: Why do so many animals choose to have sex?

“Sex is costly for animals,” Dion-Côté says. “They need to look for partners in the environment.”

“You’re only passing half of your genes on to the next generation,” adds Anne Dalziel, an evolutionary physiologist at Saint Mary's University. “You could be putting the full contribution in and not have to take on a hitchhiker, like females usually do with males.”

Despite the tradeoffs, vertebrates overwhelmingly choose to have sex rather than clone themselves. The reason behind this is a fundamental unanswered question in evolutionary biology. Researchers who have thought long enough on the subject often find themselves searching for answers in the organisms that break the mold — asexual vertebrates.

“Scientists love to study oddities,” Dalziel says. “How do you break this system of forming new embryos through sex? And what does it tell us about how sex works?”

ST10 was the first zebra shark ever born at the Shedd Aquarium in Chicago. Aquarium tour guides nicknamed her “Bubbles” after watching her frolic in the emissions from staffers’ scuba masks, and the name stuck.

In 2016, Bubbles was rooming with two unrelated male zebra sharks in the wild reef exhibit. When she laid a clutch of eggs, Lise Watson, the aquarium's assistant director of habitats and operations, dove down to retrieve them. After the pups were hatched, she called up geneticist Jean Dubach and asked her to run a paternity test.

“If you’ve ever seen the Maury Povish show, when he says ‘you are the father!’ — we actually use the same kinds of genetic markers to do paternity testing and maternity testing in sharks,” explains Kevin Feldheim, a population biologist at Chicago's Field Museum.

The results were conclusive. Neither of Bubbles’ roommates had fathered her clutch. The eggs were clones produced through parthenogenesis. It was the first time anyone had seen a zebra shark reproduce asexually while cohabitating with viable mates. Coincidentally, another team at the Aquarium of the Pacific in Long Beach, CA observed the same phenomenon at around the same time.

In November, Felheim, Dubach and Watson published their findings in the Journal of Fish Biology, shortly after the California researchers published theirs.

Formerly, zebra sharks were thought to reproduce asexually only as a last-ditch attempt to pass along their genes in the absence of a viable sexual partner. These findings poke a gaping hole in that theory.

“We thought we knew what was going on, and now this just raises more questions,” Watson says.

These questions may prove important for the survival of zebra sharks in the wild. The bottom-dwelling carnivores are becoming scarce throughout their range along coastlines in the Indian and Pacific Oceans, and the IUCN Red List classifies the species as endangered. Unfortunately, zebra shark clones tend to perish before reaching maturity. A better understanding of when (and why) these sharks switch from sexual to asexual reproduction could help conservationists successfully breed them in captivity.

While parthenogenesis seems to be a losing strategy for zebra sharks, not all asexual offspring suffer the same fate. Much further north, Dalziel and Dion-Côté study a hardy fish that successfully clones itself for generations.

Mummichogs, also known as "mud minnows," are a species of killifish about the size of a Twix bar. They tend to thrive along the Atlantic coast in the brackish water where rivers and wetlands abut the ocean. Meanwhile, banded killifish, mumichog’s close cousins, live mostly in freshwater in the eastern United States — and are among the few vertebrate species known to be able to reproduce asexually. However, there are areas, not completely salty or completely un-salty, where the species cohabitate.

More than decade ago, a male mummichog inseminated the eggs of a banded killifish. At least one of the eggs gave rise to a female hybrid. The daughter was sterile, but she was also quite adept at asexual reproduction. She cloned herself, her daughters cloned themselves, their daughters cloned themselves… Years later, clones of this fish are plentiful inhabitants of Porter’s Lake in Nova Scotia, Canada.

“The hybrid offspring seem pretty okay,” Anne Dalziel says. “In some cases they do better than one parental species.”

Actually, mummichog and banded killifish swap genes somewhat regularly. Dalziel and Dion-Côté found several hybrids when they went fishing in Porter’s Lake. None of the clones are sexually viable, but some lineages may be decades or even centuries old.

While asexual mothers avoid the dangers and costs of sex, asexuality comes with its own set of consequences. Chief among them are what Dion-Côté calls a “genetic dead end.” Aside from occasional mutations, asexual mothers pass along the same exact genome generation after generation. When the environment changes in a way that disadvantages the clones, everyone suffers the same consequences. In addition, harmful mutations can accumulate over generations.

Dion Côté explains that conventional knowledge in evolutionary biology predicts that asexual lineages will “eventually become maladapted to their environment.” Yet some organisms, like killifish, defy this assumption. A separate group of German researchers identified a species of mite that has survived without sex for millions of years.

In the past decade, scientists have identified asexual reproduction in a number of new species. Many of these discoveries happened by accident. Last year, conservationists at the San Diego Zoo compiled genetic information for the zoo’s population of California Condors and found that some of their birds were born via parthenogenesis.

Dalziel predicts that many more asexual species will be identified as genetic testing becomes cheaper and easier to access. For all you know, that songbird flitting between trees in the park could be a clone. As of 2021, scientists had only sequenced the complete genome of 0.2% of known animal species.

“Unless you’re looking at the DNA to see if they’re clones of a parent, you might not know,” Dalziel says. “There could be hidden asexuals out there.”