Researchers say this thriving reef near Tahiti is one of the largest healthy mesophotic reefs known to scientists. 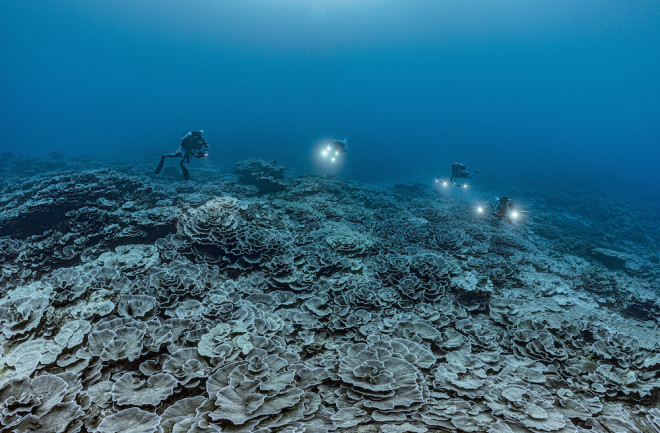 Hopeful news about coral is hard to come by these days. That’s part of the reason images of this extraordinary reef in French Polynesia made the media rounds early this year. Located off the coast of Tahiti, its rose-shaped colonies stretch continuously across nearly 2 miles of seafloor. But at a depth around 150 feet in the South Pacific, the reef remained mostly uncharted until last year, when coral biologist Laetitia Hédouin paid it a visit after a tip from a local dive shop. The combination of its size, depth and pristine quality was startling.

“It’s like a treasure,” Hédouin says, describing the mature coral as virtually untouched by climate change. “The question is: How long will it survive?” Studies indicate that coral coverage globally shrunk by half between the 1950s and early 2000s, and some 14 percent of the world’s coral died off between 2009 and 2018, largely due to warming seas and ongoing bleaching events.

Hédouin partnered with UNESCO to document and study this thriving Tahiti reef in late 2021. Notably, the team of researchers and photographers documented some of the same species that are threatened in shallower reefs, suggesting these lesser-explored, mesophotic reefs — those deeper than 100 feet, where sunlight is limited — could play a vital role in preserving coral. And scientists don’t really know how many healthy mesophotic reefs are hiding in our oceans’ depths.

Advancements in dive technology are shifting that. Hédouin says rebreather gear in this latest expedition allowed divers to recycle their air and extend time at depth four times longer than conventional diving. Changes in the affordability and safety of such tools are expanding ocean research possibilities.