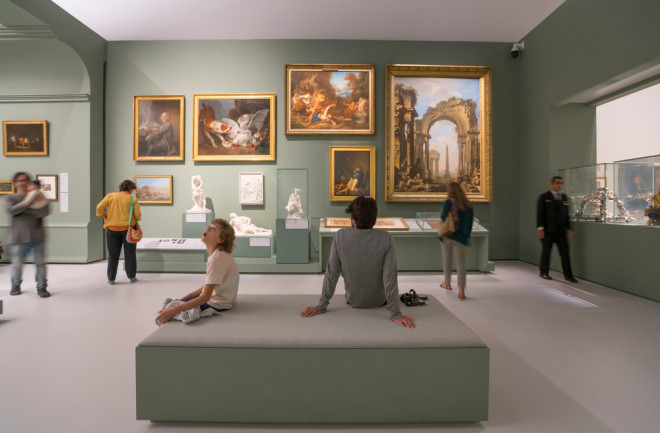 Museums are cultural epicenters, whether they are as large as the Metropolitan Museum of Art in New York City or as small as the International Vinegar Museum in Roslyn, S.D. There are an estimated 35,000 active museums in the U.S. alone, and in 2018, more people visited a museum than attended a professional sporting event.

There is so much to learn and experience at museums, which is a big part of their draw; but this can also create museum fatigue for visitors, where interest sharply declines as people go through the exhibits. Museum’s do their best to keep visitors engaged, and the guests themselves want to get the most bang for their buck, but it’s tough when visitors can only spend less than a half-hour at each exhibit before losing interest.

“I think it’s a real thing,” says Tamara Onyschuk, head of exhibition planning at the Royal Ontario Museum in Toronto. “Visitors figuratively hit a wall, whether it’s mental or physical.”

Many of the most popular museums in the world are large facilities. For example, the Smithsonian National Museum of Natural History in Washington, D.C., is the most visited natural history museum in the world and covers 1.5 million square feet of space. And that space is full of fascinating displays and exhibitions.

“You’re taking in a lot of information,” says Onyschuk. A large space is a perfect recipe for visitor fatigue, but museums are trying to combat it.

Within a certain exhibition, museums can vary displays that visitors interact with to help them fight fatigue and stay engaged. “You try and mix up different experiences – you try to provide seating for folks,” says Onyschuk. “Whether it’s reading first […], then you’re actually physically doing an interactive or maybe you’re sitting down to watch a video.”

Another benefit of varying displays is that it keeps visitors on their toes. A 2018 study found that visitors tired faster when they could anticipate upcoming content in an exhibit.

“Lately we’ve been also trying to scrutinize the amount of text we put on,” Onyschuk says. “We’re not doing encyclopedias on walls.”

The environment can also play a big role in visitors’ moods, which museums can use to their advantage. “Some [environments] are more to energize; some are calmer to be more contemplative,” says Onyschuk.

When it comes to museum exhibits, whether permanent or temporary, the goal is not to deliver a full dissertation to visitors. Instead, the focus is often on a core concept or theme. “You essentially start with a big idea, like what’s that big takeaway you want everyone to realize,” says Onyschuk. “An exhibition is storytelling. You really want to connect with people.”

To make these connections with visitors, exhibit developers put themselves in visitors’ shoes. This starts at the beginning of the design process, where museum staff conduct surveys of visitors, learning what topics they’d most like to see featured in an exhibition.

“We do a lot of topic testing,” Onyschuk says. “We look at that data carefully. […] You might have to readjust how that exhibition experience will be, taking into account visitor feedback.”

And the evaluation process doesn’t end after an exhibit opens. For example, the American Museum of Natural History uses an extensive evaluation procedure to assess its exhibits and education program, with guidelines that are publicly available. This transparency and accountability reflects a fundamental truth about museums — they belong to the communities they’re located in.

“We want to have a welcoming environment,” says Onyschuk. “It’s the community’s museum.”

For museums, especially large ones like the Royal Ontario Museum in Toronto or the Field Museum in Chicago, the goal is not to “solve” museum fatigue. Rather, the goal is to create a warm, welcoming environment that encourages visitors to come back again, and again.

Indeed, creating a lifelong learner is a mission for many museums, such as the Art Institute of Chicago. And museums are reflecting on their roles in their communities and the world, in wake of controversies surrounding stolen items.

The next time you’re visiting a museum and find yourself getting tired or overwhelmed, find a spot to sit, relax and reflect on just how much work has gone into making you feel comfortable and welcomed there — and how museums still work on making everyone feel the same way.

Yes, You Can Control Your Dreams: The Strange Science of Lucid Dreaming

More From Discover
Planet Earth
The World's Only Floating National Park is Under Threat
The Sciences
The Domino Effects of a Global Food Shortage
Mind
How Failing Could Actually Help us Succeed
Technology
The Hidden Science Behind Video Games Like The Last of Us
The Sciences
What to do if Your Dog is Stolen or Worse Held For Ransom
Health
Liquid Meal Replacements: Can We Move Beyond Food?
Recommendations From Our Store
My Science ShopDiscover STEM Kits
My Science ShopDiscover 2022 Calendar
My Science ShopStrange Science
My Science ShopElements Flashcards
Shop Now
Stay Curious
Join
Our List