You've likely heard of the huge masses of floating plastic in our oceans. But these patches only account for 1 percent of marine plastic pollution. Where is the rest of it going? 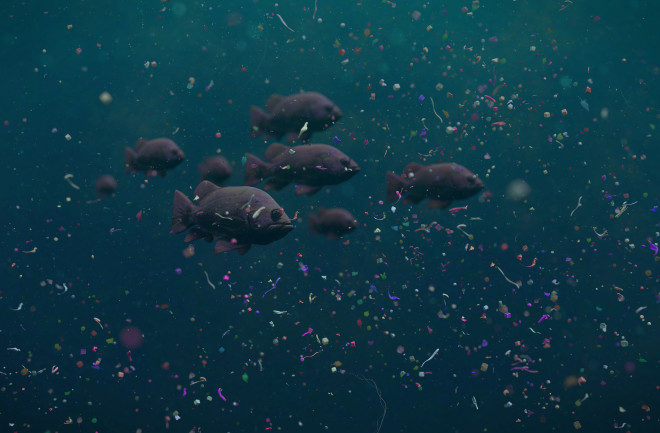 Plastic is everywhere. Whether it’s a disposable plastic cup filled with a morning iced coffee, the container holding your take-out lunch, or even fruits and vegetables wrapped in plastic — in today's world, it's nearly impossible to avoid. This material can take hundreds of years to break down, if it all, with huge quantities of plastic turning into pollution. Millions of tons are dumped up in our oceans each year.

Awareness of the problem of plastic pollution in the ocean largely was largely pushed by the finding of enormous floating masses of plastic, such as the infamous “Great Pacific Garbage Patch,” the largest accumulation of manmade debris in the ocean. Located halfway between Hawaii and California, it’s the largest of five offshore plastic accumulation areas in the world’s oceans, covering an area of about 1.6 million square kilometers, or about twice the size of Texas.

Much of this plastic takes the form of microplastics, miniscule fragments of plastic that break off from larger plastic items, like cups and bags, as they degrade in the environment. They can be as small as a microscopic virus or as large as a grain of rice, and can harm the entire ocean food chain, from krill to baleen whales.

But these floating patches account for just about 1 percent of the 10 million tons of plastic pollution that goes into oceans each year. So where’s it all going?

Pollution on the Ocean Floor

Not only is plastic ubiquitous in your everyday life, it’s even accumulating in the most remote parts of the world: it’s believed that the other 99 percent of plastic entering our oceans lies in the deep ocean, or the depth at which light starts to fade.

While you might’ve expected the surface of the water to contain the greatest amount of plastic considering that it floats, the deep-sea zone, or midwater, located 180 to 460 meters below the surface, actually contains the most amount of microplastic waste — about four times as much as that found on the surface.

Scientists even discovered the existence of microplastic hotspots on the ocean floor, formed by bottom currents that function like a conveyor belt to move tiny pieces of plastic around. According to a study published in Science last year, one hotspot in the Tyrrhenian Sea, a part of the Mediterranean Sea, held nearly two million fragments of microplastics within one square meter.

The same conveyor belt currents that inadvertently help to form microplastic hotspots on the ocean floor also transport nutrients and oxygenated water, which indicates that these deep-sea plastic patches form in the same places as key ecosystems filled with marine life. “We were shocked at the high concentrations of microplastics we found in the deep-seafloor,” Ian Kane, a geologist at The University of Manchester and lead author of the study, said in a statement. “We discovered that microplastics are not uniformly distributed across the study area; instead they are distributed by powerful seafloor currents which concentrate them in certain areas.”

And in contradiction to the researchers’ prediction, the microplastics they found showed that the majority polluting the sites they sampled didn’t originate from fishing equipment, but instead from materials commonly found in single-use beverage and food containers. Even more, the researchers found greater amounts of microplastics at the sample site nearly 15 miles away from the coast than they did at the one closest to shore. This likely means that the pollutants came from places further away, so there might be even more plastic in the ocean than we realize.

If these findings about how polluted the deep-sea zone is holds true for the ocean environment above it, it would be cause for even greater concern, as this zone is an essential habitat for most marine animals. To illustrate, the researchers found large amounts of microplastics in pelagic red crabs and giant larvaceans, two filter-feeding species that reside in the midwater and are fundamental to food webs at both the ocean’s surface and floor. These plastics can contain toxic chemicals and provide zero caloric value. While it’s understood that microplastics can interfere with reproduction and damage internal organs in some organisms, their effect on these species as populations is still unknown.

Roughly 8.3 billion tons of plastic have already been produced since the early 1950s, and 91 percent of that isn’t recycled. And if plastic use continues at the current rate, there will eventually be more plastic in the ocean than fish, according to a 2017 U.N. report. "Our study has shown how detailed studies of seafloor currents can help us to connect microplastic transport pathways in the deep-sea and find the 'missing' microplastics,” said Mike Clare of the National Oceanography Centre in a statement, who co-lead the research. “The results highlight the need for policy interventions to limit the future flow of plastics into natural environments and minimize impacts on ocean ecosystems."