Did This Giant Sea Lizard Rule the Oceans 66 Million Years Ago?

A team of paleontologists unearthed Thalassotitan atrox, a massive new mosasaur from Morocco. 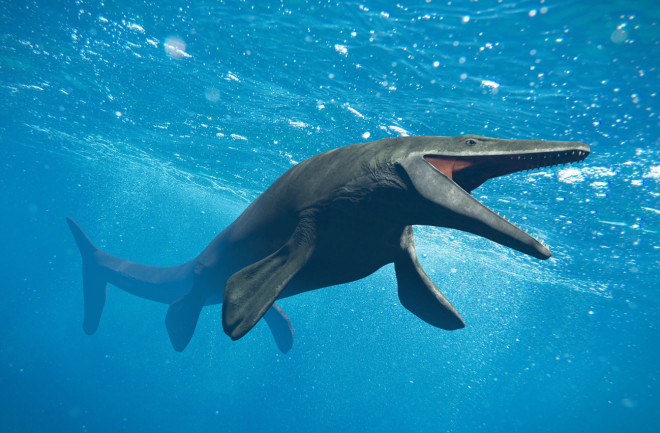 Earlier this year, scientists announced the discovery of a new giant sea lizard — a mosasaur — known as Thalassotitan atrox. They say it likely sat atop the food chain in the oceans of the Cretaceous period and played a key role as an apex predator. Their findings were published in Cretaceous Research.

Stretching up to nearly 30 feet long, T. atrox boasted a massive 1.4-meter-long skull. Other mosasaurs could reach up to 39 feet in length. “It's not the biggest mosasaur, but it's dang big,” says Nick Longrich, a paleontologist and evolutionary biologist at the University of Bath. He was part of the team that made the recent discovery.

Mosasaurs, marine reptiles that are not related to dinosaurs, ruled the oceans around 66 million years ago. Species other than T. atrox occupied different ecological niches in the Cretaceous period, feasting on a whole variety of marine life; some, Longrich explains, ate squid, sea turtles or fish. T. atrox, however, likely ate other marine reptiles —taking up the space that great whites or orcas do today.

On the menu for T. atrox was just about anything, say the researchers. Wear and tear on the fossilized teeth and other fossils found at the same site in central Morocco, a region that was underwater during the Cretaceous, suggest that it feasted on marine turtles, plesiosaurs and possibly even other mosasaurs.

“Basically, there was almost nothing in the sea that this thing couldn't handle,” says Longrich. “It's got these conical teeth and so, probably like a killer whale, it's grabbing things and tearing pieces off.” In the process of eating its toughened prey, T. atrox wrecked its teeth, grinding some down to their roots.

Based on scarring on the other fossils, Longrich and his team believe T. atrox frequently scrapped with other marine reptiles or competed with others of its own kind — a known behavior of other mosasaurs. “On some of these you can see where the bone has been damaged or is healing or maybe infected. It might have contributed to the death of some of these animals too,” he says.

Thalassotitan atrox derives its name from the Greek words for sea (Thalassa), giant (titan) and cruel or merciless (atrox). But was this clearly massive creature as ferocious as it seems? Polcyn admits that some of the evidence is “circumstantial” at best.

For instance, the other fossils found nearby T. atrox — believed to be part of the creature’s last supper — were not actually found in its gut. That mosasaurs did eat other mosasaurs and a bounty of other sea creatures is clear, as they have been found in fossilized guts in the past. But in this case, the evidence isn’t so definitive.

In short, the research team believes T. atrox is likely a new species, but perhaps not quite so unique as it would first seem. It’s possible that the beast is merely one or two evolutionary steps away from the other giant sea lizards that roamed the Cretaceous, chowing their way through the oceans.

Not all paleontologists are convinced of the finding’s significance, however. “Since there was no analysis of the growth stage of the animals used in this study, and all the specimens are large individuals, we may actually be conflating this species with another named species,” says Michael Polcyn, a senior research fellow at Southern Methodist University who has studied mosasaurs extensively. “These may be just very large or old individuals.”

In particular, T. atrox bears similarities with another group of mosasaurs: those under the genus Prognathodon. To paleontologist Takuya Konishi, an assistant professor in the department of biological sciences at the University of Cincinnati who has studied mosasaurs for nearly two decades, the new fossils very closely resemble Prognathodon overtoni.

“The bulk of the features are basically found in this other species of mosasaur,” he says. “It’s just 10 million years older […] The morphological consistency between the two mosasaurs likely implies just a continuation of that same kind of niche for Prognathodon.”

It may not even matter, Konishi continues, that the remains of T. atrox were found in Morocco as opposed to North America, home to the P. overtoni. “[T]hey are large predators, ​and 10 million years would've given ample time for any large marine reptiles to achieve global distribution, keeping their original niche wherever they ended up,” he says.