Drought At Lake Powell Reveals Preserved World That Was Once Lost

The dwindling water levels of Lake Powell are revealing burial sites, pottery and a 900-year-old ancient structure that was once sacred to Indigenous populations. 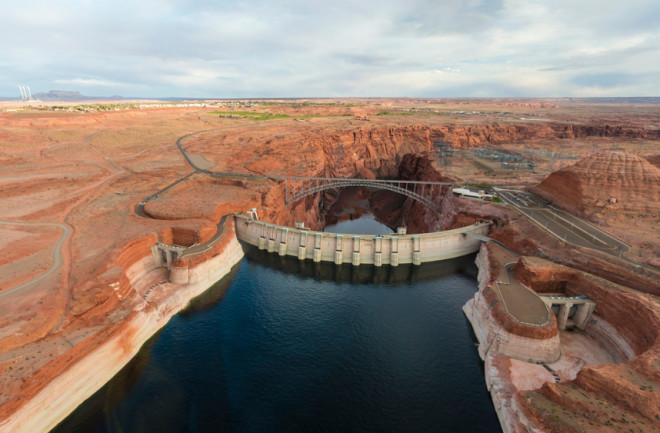 In recent years, droughts resulting from global climate change, as well as increased water usage, have meant that Lake Powell water levels are dwindling to lows not seen in decades — the reservoir is only 26 percent full, 180 feet below its high point.

And below the water line, an entire world has been revealed. “We’re seeing where Indigenous people lived and also where they died,” says Erik Stanfield, a Navajo Nation anthropologist.

Once sacred to Indigenous populations, the low levels of Lake Powell are now revealing burial sites, pottery and even a 900-year-old ancient structure.

American Western population growth in the 20th century meant that states like California, Colorado, Arizona and Utah were constantly jockeying for water rights, which resulted in large scale dam projects that transformed western landscapes. The Glen Canyon Dam was among the best known and most controversial dams ever built.

Critics have long considered Glen Canyon Dam, which forms Lake Powell, as one of the biggest environmental disasters in U.S. history. Completed in 1963, it stands 726 feet tall and is second in height only to the Hoover Dam. It took 17 years to fill and once it was done, the dam had flooded miles of the Colorado River.

“Nearly 186 miles of riparian habitat was drowned and destroyed — habitat that was thought by many to be the heart of the Colorado River,” says Eric Balken, executive director of the Glen Canyon Institute.

But Glen Canyon wasn’t just an important habitat for native species, it was also sacred to many of Indigenous populations including the Navajo, Hopi, Pueblo and Paiute tribes, as well as many others. The Indigenous people living in Glen Canyon when it was dammed, were forced to relocate, leaving behind archeological sites from people that had been living there for thousands of years.

“It was one of the greatest tragedies of Glen Canyon Dam,” says Balken.

These lands had provided a home to a bustling population a thousand years ago, says Stanfield. Indigenous people living there left behind a host of sacred sites including ancient farmlands, burial sites, buildings, sandals, granaries and pottery. And the dry climate, says Stanfield, had allowed for incredible preservation.

“Roof beams, for example, would have looked like they were ten years old, not a thousand,” Stanfield says.

Along with the dry climate, the cold water of Lake Powell was much better for preservation than expected. In Moqui Canyon, for example, a part of Glen Canyon Recreation Area, Stanfield’s team found a wall that had been part of an ancient structure approximately 900 years old, and next to the wall was a full pot with a yucca cortège that would have been used to carry the vessel around.

Visitors have also found items like burial sites and pottery. Stanfield notes that visitors should not remove items from the park, even if they’re giving them to the park rangers, because these are sacred and meant to be left in their home.

“From a tribal context, the Navajo and Hopis that still live here would want those items to remain where they were found because they’re considered the property of those who lived there before. Moving them is strongly discouraged unless you think they’re going to be destroyed or looted,” says Stanfield.

Stanfield says that as the landscape changes, the way it’s managed must also change. He hopes that the tribal governments are consulted and included in management plans.

“As more sites come out of the water, they need to be monitored to see whether there has been damage,” Stanfield says.

Many of the rock and mortar structures that survived did so because they were in less traveled areas. Boats and wave action didn’t push against the wall and erode foundations.

“In less popular spots or places where boats couldn’t go as fast, the structures were more likely to survive,” says Balken. “Some of the structures are in such good shape that you wouldn’t even know they had ever been under water.”

Balken, who has been with Glen Canyon Institute since he started as an intern 16 years ago, says that watching the canyon come back to life has been the highlight of his career. This world that disappeared under water for over half a century is now coming back to life and can finally return to its former glory.

“There’s this huge ecological transformation that’s happening that nobody thought would ever be possible,” Balken says.