We have an incomplete record of massive volcanic eruptions that have happened on our planet. Examining ice core records from both poles is helping fill that in. 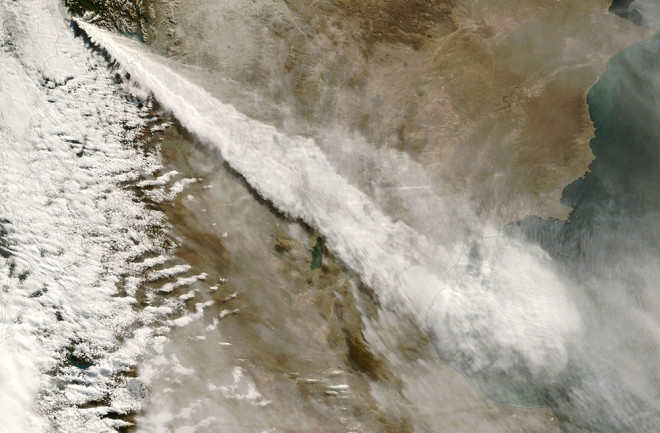 The ash plume from the May 3, 2008 eruption of Chaitén in Chile seen from Terra's MODIS imager. Credit: NASA Earth Observatory.

It is hard to think of a larger catastrophe than a gigantic volcanic eruption. The day is turned to night, seering hot clouds of ash and debris roar down, the earth shakes constantly and the landscape is buried. That's just the local impact. Globally, a giant blast might send ash around the planet and cool the climate for years at a time. You'd think it would be hard to miss the evidence of such volcanic events.

Yet, the geologic record is incomplete. The power of erosion and transport can take thick deposits of ash and erase them (or at least move them). New eruptions can bury the evidence of those that came before. The tell tale signs of such fury can be obscured so that what might have seemed like armageddon at the time is lost to history.

The Icy Record of Volcanism

Luckily, we don't need to only rely on the rock record to find out about past volcanic eruptions. We have two poles recording what is happening in the atmosphere through layer after layer of snow that turns into ice. Then, we can core thousands of feet into the Greenland and Antarctic ice caps read back into Earth's past to find those "lost eruptions."

That's exactly what a new study by Jiamei Lin and colleague just published in Climate of the Past did. Reading back the record stored in ice cores from both poles, they revealed the volcanic activity of the past ~60,000 years (at least in terms of the big eruptions). What they found was 85 eruptions that were recorded at both poles -- big enough to spread the aerosols and ash around the globe -- as well as some interesting hints to how volcanoes responded to melting ice sheets at the end of the last Ice Age.

When a volcano has a large explosive eruption called a Plinian eruption, it sends ash, volcanic gases and debris over 100,000-150,000 feet above sea level. That is well into the stratosphere where prevailing winds like the jetstream and trade winds can move the material around the globe. The ash doesn't stay suspended for long -- usually days to weeks -- but the aerosols (fine droplets) of sulfuric acid or gases like chlorine and fluorine can stay aloft for months to years.

These materials can then be deposited in the polar ice caps either by settling out of the atmosphere or within precipitation like snow. Because the snow at the poles mostly persists from year to year, piling up and compacting into ice, an ice core will be an annual record. So, like reading a tree ring, we can look back through ice cores and potentially match different ice cores by counting the years.

How Far Back Do We See?

An ice core from the WAIS Divide site in Antarctica. A grey layer of volcanic ash is present in the core. Credit: Oregon State University.

Now, how far back can we look? This varies from ice core to ice core, but a good example is the Greenland Ice Sheet Project 2 (GISP2). The deepest part of this core, over 9,000 feet beneath the ice sheet surface, was date to ~110,000 years! That means that the snow that formed the deepest ice sampled fell when homo erectus, one of our ancestors, was going extinct. That is a long record of changes in the Earth's atmosphere.

Lin and others looked at a wide variety of ice cores from both poles to take a census of volcanism recorded. They found that over 1,100 large eruptions (bigger than 50% the size of the 1815 Tambora eruption) were recorded in the Greenland ice cores and over 700 in the Antarctic over the past ~60,000 years. That's a lot more than what we find in the geologic record. Moreover, they found over 5x more very large eruptions (meaning VEI 8+, or bigger than anything in recorded history) than the geologic record suggests.

So, maybe we're underestimating how often the planet experiences a massive volcanic eruption. A number of the eruptions they found in the ice (identified through ash fragments) are from known blasts, such as the gigantic VEI 8 Oruanui eruption from Taupo in New Zealand that occured ~26,500 years ago. However, they also found eruptions close to that size with no known source, including the second largest sulfate signal they found in the ice cores at ~45,600 years ago. That is both exciting ... and a little disconcerting.

On top of this, they looked into the theory that volcanic activity in the Northern Hemisphere increased as the ice sheets from the last Ice Age melted. The idea is that as the land was unloaded from all that ice, pressure was reduced in the crust so potentially more magma was generated and could rise to the surface. They found that right after the end of the Ice Age, volcanic activity was 34% higher than it is today. Tantalizing evidence to connect ice sheets and volcanism.

There is a lot we don't know about geologically-recent volcanic activity. The ice core record gives us some hints that we still need to track down the sources of some of the largest eruptions of the past 60,000 years. Maybe they came from remote volcanoes in the South Pacific, submerged under the ocean. Maybe they are dark horse volcanoes in Japan or Mexico that have been overgrown and eroded. Volcanologists will continue to look for these events in the past to help us forecast what we might expect in the future.