Ridden with gastrointestinal problems as they trekked across the continent, the Corps of Discovery was a big fan of popping mercury pills. Present-day archaeologists are still searching for evidence of the element in their excrement. 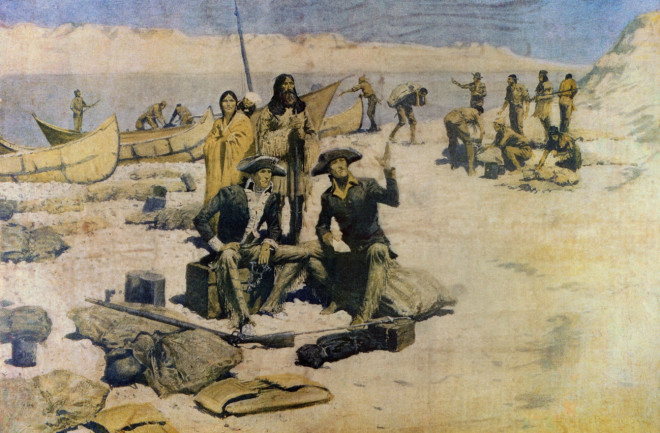 Lewis and Clark At The Mouth Of The Columbia River, drawn by Frederic Remington in 1906. Behind the explorers is Sacagawea with her baby and husband. (Credit: Everett Collection/Shutterstock)

In May of 1804, Captain Meriwether Lewis, Lieutenant William Clark and the rest of their 33-member Corps of Discovery began a long trek from St. Louis to the Pacific Ocean. Their goal? To explore the unknown territory and establish trade with the Native Americans.

“There’s something about the psychology of the audacious attempt to cross a continent, when they didn’t even know where they were going,” says Julie Stein, a geoarchaeologist at the University of Washington and executive director of the Burke Museum.

It’s true — the historical journey of Lewis and Clark has captured countless minds for more than 200 years, many of whom wish to reconstruct that journey themselves. To attempt just that, experts and enthusiasts alike rely on the duo’s military guidebook, journals, maps and … poop.

The Corps brought dozens of medicines with them, most of which induced either sweating, vomiting or defecating. Among the most effective ones they used, says retired physician David J. Peck, were opium and derivatives of opium, which were mixed with whiskey. “Back then they thought that opium was a strong stimulant to the system, not realizing that it was a potent depressant,” he explains. “They gave it to Sacagawea when she had a significant abdominal problem, which probably did her some good, but only in terms of pain relief.”

Prior to the expedition, then-president Thomas Jefferson arranged for Lewis to receive medical training from his good friend, the Philadelphia-based physician Benjamin Rush. Rush, however, was a big fan of using mercury to combat a variety of ailments. His “Dr. Rush’s Bilious Pills,” or “thunderclappers,” as they came to be known, contained a shocking amount of the mercury chloride mineral known as calomel, among other strong laxative ingredients. According to some accounts, the pills were a whopping 60 percent mercury.

“He called it his ‘depleting therapy,’ understandably, because it would give somebody really profound diarrhea,” says Peck, author of Or Perish in the Attempt and So Hard to Die. “The thinking was that gastrointestinal problems, especially constipation, caused various kinds of diseases. So he thought, ‘well, if we can get rid of what’s inside your GI tract, then we’re treating whatever disease it is that you have.’”

Lewis and Clark brought along hundreds of these mercury-laden pills and used them quite a lot. After all, a steady diet of game meat washed down by river water probably resulted in frequent gastrointestinal issues. Not to mention the other problems that plagued them while trekking through unfamiliar wilderness, Peck adds, such as the abscesses on their feet and legs from being pricked by prickly pear splines.

Sometimes they doubled their doses. One of the most interesting such instances, Peck says, is when Clark came down with a case of body aches, chills and fever — likely symptoms of Colorado tick fever, a rare viral disease spread by infected Rocky Mountain wood ticks. “Of course, they wouldn’t have had any idea about that then because they had really no concept of either bacteria or viral illnesses. So Clark decides to take five of these Dr. Rush’s Bilious Pills,” he says, adding that the mercurial laxative indeed worked as advertised. “That’s a whopping dose of stuff that’s basically toxic to your system.”

If you’re wondering about the safety of ingesting mercury, we don’t recommend trying it at home. “The form of mercury that was being used at the time, unbeknownst to everyone, was an insoluble form of mercury,” Stein says. “It was so tightly bonded to the other elements [namely chlorine], that the digestive system could not dissolve it.” That was lucky for the Corps and everyone else who took the pills; they’d have been dead within days if they’d consumed quicksilver, or elemental mercury, a form that passes easily through the blood-brain barrier.

“There’s a lot of this kind of bizarre medical thinking back then,” Peck adds. “The most amazing thing, I've always thought, is that these guys survived the medical practice that they had.”

The Search for Poop-Laden Pits

Here’s the good news: Because the mercury from Dr. Rush’s Bilious Pills couldn’t be absorbed by their bodies, it’s found even today in the plentiful poop that the Corps left behind as they journeyed along. And that’s really good news for research, because archaeologists have few other ways of retracing Lewis and Clark’s steps.

“Imagine that you’re on a canoe trip,” Stein says. “Every night you get out at some point, you make a campsite, you pack up everything, get it back in the canoe and off you go. And every time it rains, every time the river goes up or down, your campsite is washed with that river water. Where do you expect to find the evidence of Lewis and Clark?”

Should a fire pit remain, there’d be no telling who created it in the first place — after all, everyone builds a fire using the same materials. Even if archaeologists uncover an object known to belong to the explorers (say, one of their Jefferson Peace Medals), there’s always the chance that it was traded to a Native American and passed down from generation to generation before being dropped or buried someplace else entirely.

In short, Stein says, it’s very difficult to find the Lewis and Clark campsites. And she’s done her fair share of trying, having spent a portion of the early 2000s searching for the explorers’ latrines at a potential campsite in Astoria, Oregon, called Fort Clatsop. “The logic is that the mercury would stay right there because it couldn’t be dissolved by the digestive system, or the rain, or melting snow or plants’ roots. It would sit there in the ground,” Stein says.

To find these latrines, researchers turn to the military guidebook that the Corps (first and foremost a federally-sanctioned military expedition, after all) used to organize their camps. Baron Frederick von Steuben’s Revolutionary War Drill Manual encouraged its readers to dig latrines (then called “sinks”) whenever stopping for more than a certain number of days, and to dig new ones at least every four days. For those Corps members who ate a bit too much game and needed relief, the latrines could be found 300 feet in front of the camp or behind it.

Unfortunately, a lot of things can create a pit reminiscent of the ones used as latrines. Some animals, for example, dig burrows that they subsequently fill with feces or food remains. In the case of Fort Clatsop, Stein and her colleagues found hundreds of pits — all created by the root systems of gigantic trees felled long ago. In other words, it was a dead end.

If there had been a Lewis and Clark latrine at Fort Clatsop, Stein suspects that the first seed to land in that treasure trove of organic matter and nitrogen would have grown twice as fast as every seed nearby. If luck had been on her side, the enormous tree might have lived for 200 years, easily, and waited for her to find it.

Unfortunately, though, farmers and loggers arrived first. “They're going to clear the land and cut down the trees and burn the stumps. And when they burn the stump, the fire goes down into the pit created by the tree, and then they rip out the stump and disturb the whole landscape,” Stein says, adding that, likely as a result of this disturbance, she found an equivalently medium level of mercury over the entire landscape.

Out of the more than 600 potential locations Lewis and Clark stopped at, only one has been verified by mercury analysis: Travelers’ Rest in Lolo, Montana. We know from their journals that the Corps visited on two occasions. The first was in mid-September of 1805, after attempting to pass over the Bitterroot Mountains and being forced back by deep snow. Then they returned at the end of June and into early July of 1806, on their way back east.

“It was definitely a colder climate those years that they were here in the Bitterroot Valley,” says Maci MacPherson, a park manager at Travelers’ Rest State Park. “At the end of June in 1806 they saw the bitterroot plant flowering, which was one of their ‘new finds’ and which later became the Montana state flower. Nowadays … the bitterroot flowers usually mid- to late-May, so quite a bit earlier than when they were here.”

In 1960, the National Park Service named Travelers’ Rest a National Historic Landmark — but mistakenly placed the campsite around a mile east of its true location. Then in the late 90s, says MacPherson, a group of volunteers and local enthusiasts started poking around and making celestial observations. Soon enough, the archaeologists followed, magnetometers and shovels in hand.

In the summer of 2002, Daniel Hall and his colleagues located what they hoped to be a latrine and took soil samples “at 10 centimeters below the surface, inside the pit, outside the pit, over here, over there, the deepest part of the pit, the top of the pit,” Stein says. Because there’s natural amounts of mercury everywhere — even being washed from the air by acid rain into our streams and lakes — no small trace of the element would suffice.

After running a statistical analysis on all the collected samples, however, the researchers finally got their eureka moment: There were indeed significantly higher percentages of mercury inside the pit than anywhere else around the 4-acre campsite. Evidence of Lewis and Clark had been found.

You might recall that flooding rivers are the bane of existence for those seeking concrete evidence of the expedition. But oddly enough, flooding is exactly what prevented later settlers from developing the Travelers’ Rest area and destroying its latrines. “I think we were really lucky that where they camped here was not ever built upon or disturbed,” MacPherson says, adding that the lowland area typically floods every spring. “When you walk out around the campsite, it looks very similar to what it probably looked like over 200 years ago.”

Today, visitors who wish to steep themselves in history can do so year-round. Gravel and concrete trails snake through the 63-acre park, and interpretive signs explain the locations of the explorers’ tents and latrines.

The area was also traditionally used as a campsite and trail junction by the Bitterroot Salish and the Nez Perce tribe, MacPherson adds, who were a big reason why the Corps stayed there in the first place. For a greater understanding of the people tied to the landscape well before Lewis and Clark came around, stop by Travelers’ Rest during its summer programming, when Native storytellers are invited to bring their history, culture and society to life.

Before Pompeii, A Volcano Cloaked This Ancient Village In Volcanic Ash

Finding The 164,000-Year-Old Tooth Of A Young Denisovan Girl

More From Discover
Health
What Is The Secret To COVID-19 'Super-Dodgers'?
Health
How the 'Tylenol Murders' Changed Medicine Safety 40 Years Later
Health
We May Be In A Pandemic-to-Endemic Transition For COVID-19
The Sciences
5 Hispanic Scientists That Made Amazing Contributions To Science
Planet Earth
We Could be Closer to Improving Treatment for Tumors in Dogs
Health
Marijuana Could Help Reduce Depression and Anxiety
Recommendations From Our Store
My Science ShopDiscover STEM Kits
My Science ShopDiscover 2022 Calendar
My Science ShopStrange Science
My Science ShopElements Flashcards
Shop Now
Stay Curious
Join
Our List