From Solstice to Solstice: 183 Days of the Home Planet as Seen from Space

A supercool animation of satellite images shows a half year of Earth's evolving seasons. 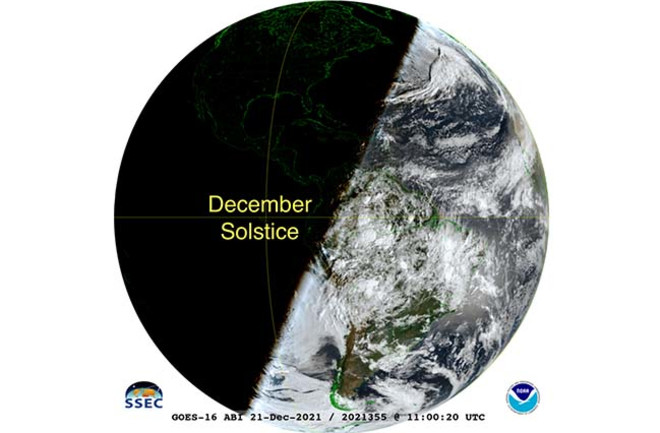 This is what Earth looked like to the GOES-16 weather satellite on Dec. 21, 2021, the December solstice. That was the longest day of the year in the Northern Hemisphere, and the shortest in the south. See below for an animation of GOES images covering every day from the June solstice to this one. (Credit: SSEC/CIMSS and NOAA)

As a potent New Year's winter storm bears down on a broad swath of the United States, spring may seem a very long ways off.

But if you live in the Northern Hemisphere, keep the faith: Since the December solstice on the 21st, the days have been lengthening, heralding an eventual return to warmer days and spring blossoms.

Of course, if you happen to live in the Southern Hemisphere, you may have noticed that the opposite has been true.

But just what is this thing called the "solstice"?

It has to do, of course, with the tilt of Earth's axis of rotation. And this animation shows in a compelling visual fashion what it's all about:

The animation consists of one image of the full disk of Earth acquired every day at about 11:00 UTC by the GOES-16 weather satellite. (That's 6:00 a.m. EST.)

It starts on the June solstice and ends on the December solstice. In each frame of the animation, the bright portion of Earth is experiencing day, and the dark portion nighttime.

At the start of the animation, on June 21, 2021, it's the longest day of the year in the Northern Hemisphere and the shortest in the south. By the end, on Dec. 21, it's flipped around.

To fully understand what you're looking at, it helps to know a few things:

First, in its geostationary orbit 22,300 miles away, the GOES satellite remains directly over a specific point on the ground as Earth rotates on its axis. From this perch — high above the Equator in the northwestern portion of South America — the satellite has an excellent view of the Western Hemisphere, including the United States.

Also, as the spacecraft orbits, a sensor called the Advanced Baseline Imager generates one image of Earth's full disk every 10 minutes. That allows it to offer excellent views of the weather in the Western Hemisphere as each day progresses.

Lastly, this animation does something really interesting: Each image is a snapshot of what the full disk of the Earth looked like — including its weather systems — at the same time every day for the 183 days between the two solstices. And that provides a beautiful perspective on the daily evolution of day and night, with the days getting progressively shorter in the north and longer in the south.

Before I go any further, I want to give a special shout-out to the creators of this animation: the awesome folks at the University of Wisconsin's Cooperative Institute for Meteorological Satellite Studies. If you have any interest in weather and remote sensing, you should check out their CIMSS Satellite Blog: https://cimss.ssec.wisc.edu/satellite-blog/

Back to the Solstices

The following diagrams help explain the solstices further (and apologies in advance that they show daylight on the opposite side from the animation):

On the June solstice, Earth's axis tilts the Northern Hemisphere toward the Sun. On this specific day, at the latitude called the Tropic of Cancer, the Sun is directly overhead at high-noon.

Meanwhile, at this time of year the Southern Hemisphere is tilted away from the Sun, bringing shorter days and cooler temperatures.

Now, flash forward 183 days, and here's what it looks like:

On the December solstice, the tilt of Earth's axis points the Northern Hemisphere away from the Sun and the south toward it. At the Southern Hemisphere latitude called the Tropic of Capricorn, the Sun is now directly overhead at high-noon.

As I'm writing this story on Dec. 30, 2021, the day will last for nine hours, twenty-two minutes and twenty seconds. That's already two minutes and forty-four seconds more than on the December solstice, nine days ago.

And as the New Year's snowstorm approaches, I'm very much looking forward to the next solstice.