Fungi helped prehistoric plants transition to life on dry land nearly 500 million years ago. Today, they continue to work with plants and trees in a mutual exchange of nutrients. 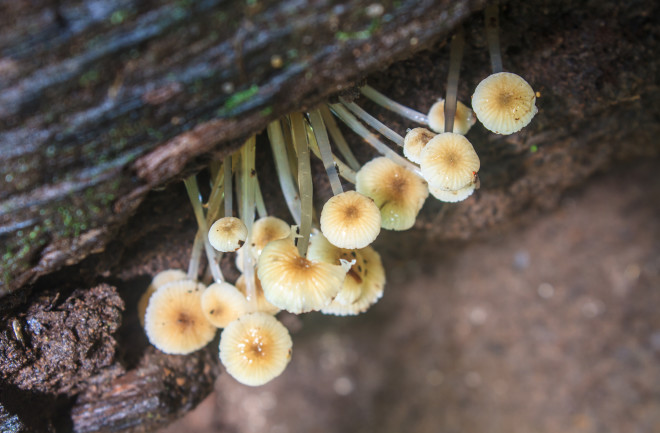 Fungi are critical for making bread, beer, cheese and wine — basically, everything important in life. They can also cause pesky, and sometimes even fatal, infections in humans. Beyond that, they can be edible mushrooms or luxury truffles. Some make us hallucinate and others can kill us, perhaps after inducing said hallucination. Still others are deadly for animals and plants, whether it means zombifying ants or killing off trees and plants. Fungal diseases like chytrids are responsible for large-scale losses of entire populations of amphibians, while the deadly white-nose syndrome is wiping out bats across North America.

But what fewer people know is that fungi are also critical for the health and success of plant life on land overall. They exchange critical nutrient with plant roots and even provide a kind of information highway — sort of like a fungal internet — that can help plants warn their neighbors about threats and share resources. Fungi are also critical in the degradation of dead plants and recycling of nutrients. “They can be fantastic tools for pushing the growth and health of plants, but on the other hand, they can degrade the plants and can be very dangerous pathogens,” says Paola Bonfante, a retired plant biologist who studied fungal interactions at the University of Torino in Italy. “They go from being good friends to very dangerous killers.”

Plants first began to emerge on land about 470 million years ago after first starting off as aquatic organisms. Back then, plants wouldn’t have been as well protected from direct sunlight as they were in water, and the soil wouldn’t have had the organic component it does today. Most early plants discovered in fossil evidence have also been associated with fungus. Plants hadn’t yet evolved roots, but they had rhizomes, and fungi have been found inside these root-like underground plant stems. “These fungi probably helped plants to survive when they moved from water to land,” Bonfante says.

The way plants and fungi work together is through a symbiotic association known as a mycorrhiza. The word, which means fungal root, refers to the fungus's role in colonizing the plant's rhizosphere, or root system. In the case of arbuscular mycorrhizal fungi, the microorganisms get right into the cells of their hosts.

The latter kind of fungi are the ones that trace back to the origins of plants on land. They exchange nutrients with the plant in mutual symbiotic exchange. One better known exchange happens as the fungi provides phosphates while the plant releases carbon, often in the form of lipids. These fungi don’t possess the genes for breaking down these fatty acids, but plants can photosynthesize, so fungi depend on the plants’ ability to do this for them. The plants also release some sugar for the fungi, Bonfante says.

But there are still loads of other possible symbiotic exchanges that occur between plants and mycorrhizal fungi, many which aren’t well understood. “Each plant has a specific interaction with a group of fungi,” Bonfante says, adding that the study of these interactions is really only a few decades old; when she began to examine these relationships in 1975, there still weren't many scientists interested in the topic.

Other types of mycorrhizal fungi also exist besides the ones that penetrate the cells of their host's root system. A 2016 report estimated that 390,900 plants are known to science in the entire world. Among these, Bonfante estimates that 90 percent have associations with mycorrhizal fungi.

Some fungi can even act as a kind of redistribution center, connecting the roots of different trees together underground. Ectomycorrhizas are a different type of symbiotic fungi that surround some types of tree roots, rather than getting right into their cells like arbuscular mycorrhiza. Ectomycorrhizas networks can sometimes help trees with plenty of resources transfer carbon to neighbors in need, according to a 1997 Nature study research led by Suzanne Simard, a forest ecologist at the University of British Columbia/

But they don’t only exchange resources. Fungal networks can also work as something of a bodyguard that protects plants from insects, whether this means the fungi help warn plants to excrete defensive chemicals, or help to produce these defensive chemicals themselves. The networks may even enable plants to alert their neighbors about the presence of potential danger. “Underground there is this other world, a world of infinite biological pathways that connect trees and allow them to communicate,” Simard said in a TED Talk about mycorrhizas.

While fungi play critical roles in keeping plants alive, saprophytic fungi also are there in death, prompting the breakdown of organic material. “It’s crucial to speak about [fungi] not only as actively growing, but also when plants are dead,” Bonfante said, adding that these fungi are critical for nutrient cycling in forests and soil. “We really need the fungal activity just to degrade their activity.”

Fungi Are Capturing More Carbon Than We Thought