Dogs can’t tell us what time means to them — but maybe we can try and understand how dogs perceive the passing of time. 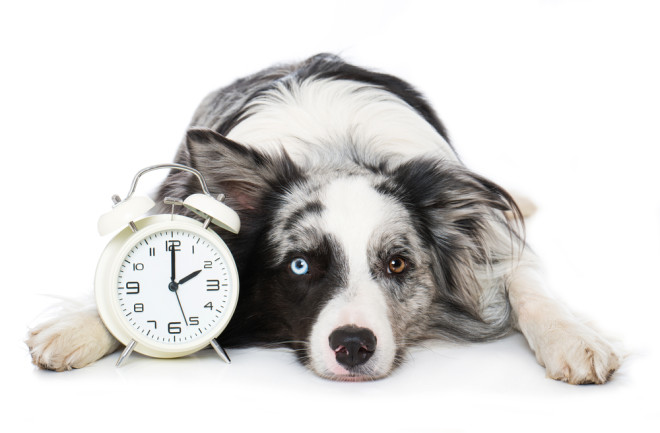 If you have a dog, you've probably had an experience like this. You head out of the house, realize you forgot your phone, pop back in to grab it, and your dog greets you as if you've been gone 10 years.

Dogs appear to have no sense of time. Yet that same dog waits lovingly by the door precisely when it's time for the kids to get home from school. What gives? Can dogs tell time or not? What does time even mean to a dog?

That's a tricky question to answer, and what precious little research has been done is, frankly, not all that helpful. But when it comes to the second example above, there probably is a fairly straightforward answer.

Read More: What Is Time?

Time Passing or Not

"There's a lot of evidence that dogs know when somebody's supposed to come home," says Greg Bryant, a cognitive scientist at the University of California, Los Angeles. "But a lot of those stories don't include details that are probably important."

Dogs have better hearing than humans; perhaps they can hear the car coming and distinguish it from other cars long before it pulls into the driveway. Or there might be more subtle clues, Bryant says, things we wouldn't even think about: the slant of light at that time of day, or a very slight sound the clock makes, or maybe something the neighbor in the upstairs apartment always does at that time of day.

"I think you have to be careful about attributing an effect like that to time perception," he says.

More interesting, perhaps, is how dogs perceive the passing of time. There is evidence, says Bryant, that dogs perceive time as passing more slowly than humans do. This is based on research on various species, showing differences based on metabolism, ecology, and lifespan, as well as other factors. So the reason your dog goes bonkers when you've been away 15 minutes may be that those 15 minutes of clock time seemed a lot longer to Fido than they did to you.

Read More: How Does Your Dog Understand You?

Besides, we all know how tricky time perception can be, even for a species that surrounds itself with clocks and calendars. The pandemic, for example, really messed with our sense of time, leading to the coining of the word blursday. During lockdown, a lot of people had the sense that time had all but stopped, becoming meaningless.

Now we often find ourselves simultaneously feeling that the beginning of the pandemic was ages ago and that it's still the summer of 2020. If we can't get a better handle on our own sense of time, how can we be expected to figure out what it's like for our dogs?

"Language has opened up all these possibilities of things we can think about," says Bryant, who specializes in the evolution of communication. And time is one of them.

In fact, a lot of time perception involves ruminating about the past and the future, and dogs probably don't engage in a lot of introspection. Humans are likely the only species that is able to wonder about how other species (and other members of our own species) conceptualize time, says Bryant.

"We're weird in that we have this conception of time that we can talk about, but for every other animal, including dogs, [time] is just what it is."