How Much Trash Is In Our Oceans?

In 2014, there was more than 593 million pounds, or 5.25 trillion pieces of plastic floating on the ocean’s surface. And experts say there's more beneath. 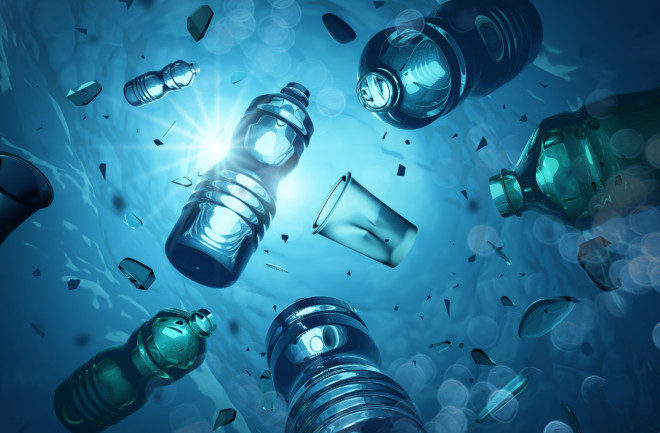 The typical American creates around 4.9 pounds of trash each day, on average. It can be found nearly everywhere in our daily lives.

Unfortunately, our disposable waste is now also a ubiquitous feature of many marine environments — and scientists across the globe have the unenviable task of puzzling out just how much has wound up in the oceans. The answer? Well, it’s complicated.

“This is a difficult question,” says Laurent Lebreton, head of research at The Ocean Cleanup, an organization that works to find solutions to ocean pollution. “Scientists have mapped the mass of plastics at the ocean surface with global estimates reaching several thousand tons of floating plastics.”

Firstly, ocean trash is by and large made up of plastics, accounting for around 80 percent of it. Some estimates state there are tens of thousands to hundreds of thousands of tons of plastic in the oceans. In 2014, the amount of plastic floating on the ocean’s surface was calculated at more than 593 million pounds, or 5.25 trillion pieces of plastic.

“Anything on the seabed or buried in sediment is difficult, costly and disruptive to measure, so we have very little information on what is underneath the surface,” continues Lebreton. Plastics in particular can become embedded along coastlines, sink into sediment, return to beaches and even settle in the deep ocean. Surface plastic is thought to only make up a fraction of the trash littering the oceans.

Calculating how much trash — and not only plastic — is in the oceans is further complicated, as it’s not clear how much is being added each year. “[T]here are large uncertainties remaining in terms of amplitude, frequency and type of plastic pollution sources. Plastic is used in many sectors of our economy and the pathways for plastics to enter the ocean are diverse,” Lebreton says. Those challenges aside, estimates range from 2 billion to 31 billion pounds added per year.

All Shapes, Sizes and Sources

Take fishing gear, for example, which is known as a major contributor to the ocean pollution problem. According to a 2021 study by The Nature Conservancy and UC Santa Barbara, more than 100 million pounds of plastic from industrial fishing gear wind up as ocean trash each year. A previous study by the World Wildlife Foundation found that fishing gear contributes around 10 percent of ocean litter each year, or somewhere between 1 and 2 billion pounds.

Of course, fishing gear isn’t the only trash floating around in the oceans. Food wrappers, cigarette butts, bottles (and their caps) and grocery bags are some of the most commonly found items  making their way into the oceans, according to the Ocean Conservancy.

Much of it comes from landfill leakages, says Julie Andersen, cofounder and CEO of U.S.-based non-governmental organization Plastic Oceans International. Other sources include littering on beaches, general waste mismanagement, and sewer outflows and storm overflows. “We like to say it’s [as if] one garbage truck per minute is being dumped into the ocean. That tends to be a good visual. You just think, ‘holy cow, that's a lot of dumping into the oceans,’” Andersen says.

Globally, only 9 percent of plastic is recycled. Some 19 percent is incinerated, another 49 percent ends up in landfills and 22 percent is “mismanaged,” according to a report published earlier this year by the Organisation for Economic Co-operation and Development.

The scale of the problem is shocking — and it’s only projected to get worse. Researchers predict that the amount of trash released into oceans could rise to 64 billion pounds by 2040 if more actions aren’t taken. Another study suggests that there could be upwards of 26 trillion pounds of plastic waste “in landfills or in the natural environment by 2050.”

But again, these are estimates. And the amount of plastic in the oceans is also only part of the story, Lebreton says. While researching the infamous Great Pacific Garbage Patch, he found plastics dating from as far back as the 1960s and ‘70s.

“This tells us that this type of plastic pollution is very persistent and might be there for several decades or even centuries if left untouched,” he explains. “We also find fewer objects with a production date after 2010, implying a time lag between plastic production, use, discard and accumulation in the subtropical gyre [a pattern of currents].”

Andersen prefers to move away from one statistic, which she says can only cover one part of the issue. “This is a systemic problem,” she says. Though her organization tends to use the “10 million per year” estimate, she also believes finding an answer to the total mass can be somewhat of a red herring: “I don't think that we need to know, because it oversimplifies the problem.”

Rather, it is necessary to understand why it is happening and how to solve it, Anderson says. For her, that revolves around creating accountability for plastic waste and its disposal, while also creating sustainable communities.

“Solutions will come from mitigation measures at the source to intercept new plastics from entering the ocean,” Lebreton says, though this requires thorough mapping to identify those sources in the first place. Once trash is in the oceans, it also breaks down into smaller chunks, changing over time but never truly disappearing. This complicates calculations, and recovery operations, even more.

“The legacy plastic that has accumulated over the last 70 years will need to be removed as much as possible and responsibly handled before it further degrades into smaller particles,” Lebreton adds.

So, how much trash is in the oceans today? How much will there be tomorrow or next year? It’s likely we’ll never truly know the answer. Best guesses are just that — guesses. But all indications are that there is a massive amount, which will continue to grow until serious efforts are made at the local, regional and global level to rein in this rampant marine littering.