How We Know What’s Deep Inside the Earth, Despite Never Traveling There

The extreme conditions of inner Earth make it impossible to explore. But seismic waves during earthquakes, volcanic eruptions and light waves from the Sun all have helped reveal fascinating insights about our planet’s mantle, crust, and core. 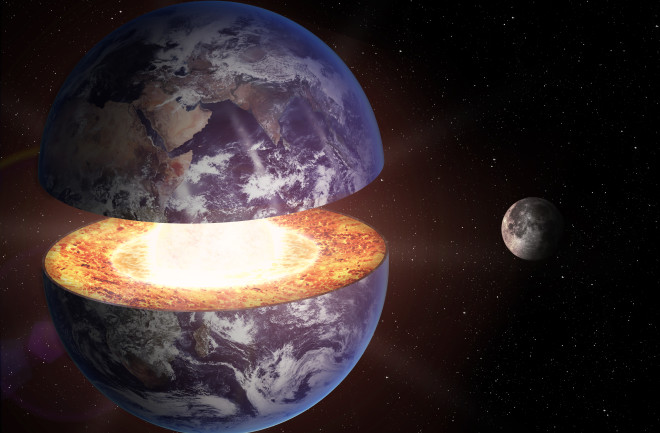 The final frontier isn’t space: It’s the Earth itself. We’ve sent people to the moon, robots to Mars and the New Horizons space probe 3.26 billion miles from Earth to snap photos of Pluto, while just 4,000 miles beneath our feet, unfathomable heat and pressure keep the center of the Earth tantalizingly out of reach. But scientists have been able to puzzle out what’s inside the Earth — including olive-green crystals and a roiling sea of melted iron — by studying meteorites, volcanic eruptions and the seismic waves from earthquakes.

“We go and explore other planets, but in many ways, going inside the Earth and figuring out what's inside the Earth is actually technologically harder than going into space,” says Vedran Lekić, a seismologist at the University of Maryland.

There are four main layers to the Earth: crust, mantle, outer core and inner core, along with transition zones between these layers. The world we know lies on tectonic plates making up the Earth’s crust, which varies in thickness from three miles to over 40. Beneath the crust lies the mantle, the layer of rock making up 84 percent of the Earth’s volume. The rocks in the upper mantle are white-hot, but if you could cool them to room temperature, they’d be a speckly olive green thanks to the mineral olivine — you might know it as the August birthstone peridot. “I think the mid-upper mantle would be gorgeous, because it would be olivine green, like 60 percent, and it would also have garnets, these beautiful red cubic minerals,” says Wendy Mao, a mineral physicist at Stanford University.

Deeper in the mantle, heat and pressure reconfigure the atoms making up olivine into two new minerals, bridgmanite and ferropericlase, which are brownish-orange and yellow at room temperature. Beneath the rocky mantle, there’s an outer core of churning liquid iron (and a little nickel) surrounding an inner core of solid iron (again with some nickel) that’s about 70 percent the size of the moon. The center of the Earth is almost as hot as the surface of the Sun, about 9,800 degrees Fahrenheit, with pressure that makes the compressive forces at the ocean floor look like child’s play.

But we haven’t been to any of these places inside the Earth. We haven’t seen them. We haven’t sent cameras or probes to bring back samples of iron glowing like coal embers. So, how do we know what’s there?

When the tectonic plates that make up the Earth’s crust move past each other, they sometimes catch and break. This breakage, along with the waves of energy that come with it, is called an earthquake. The seismic waves unleashed, sound waves too low for us to hear, travel far from the source and can tell scientists when and where an earthquake has occurred.

Detecting seismic waves isn’t new. The Chinese scientist Zhang Heng built an early seismometer nearly 2,000 years ago. But in 1889, scientists had a breakthrough in using them to understand our planet. That’s when a German researcher near Berlin detected an earthquake, but there was a problem: There weren’t any earthquakes nearby that day. It turns out, there had been an earthquake — in Japan, and its seismic waves reached Germany more than an hour after it struck. It marked a pivotal point in modern seismology.

Lekić likens seismology to the way we use X-rays to see inside the human body — the different densities of our muscles, organs, and bone mean that the X-rays travel through them (or get deflected by them) in different ways. “We can’t send X-rays through the Earth, because the X-rays won’t make it all the way through,” he says. “Instead, we use seismic waves.”

Earthquakes send ground vibrations throughout our planet, and they travel across the world in different ways. Seismometers record these vibrations, which can offer a glimpse of what’s below, explains Lekić: “Then we can use computer modeling to try to make images of what’s inside the Earth, and those images tell us essentially how quickly seismic waves travel through different parts of the Earth.”

Seismologists interpret data from earthquakes and even simulate seismic activity with air guns and explosions, and their work has shown that the Earth’s interior has different layers, some of which are easier for seismic waves to travel through than others. They can even tell us the densities of these layers. Then, a different branch of scientists called mineral physicists take it from there to determine what actually makes up those layers.

“There are astronomical and cosmic chemical constraints on understanding what are the likely building blocks of our planet,” says Andrew Campbell, a mineral physicist at the University of Chicago. Basically, the distribution of elements in the Earth should roughly match the elements present in meteorites and the Sun.

“[The material] we have available in the solar system that we could make a planet from, it should be the same kind of stuff that's in the Sun,” Campbell explains. This is because chemical reactions inside stars produce the elements that make up planets like the Earth. By looking at the wavelengths of light that the sun gives off and comparing those wavelengths to light bouncing off known elements, scientists can glean the chemical makeup of the sun.

The light shows there's a lot of silicon, oxygen, magnesium and iron, along with other elements like potassium and calcium, Campbell says. The relative amounts of elements in the sun is similar to what we see in certain primitive meteorites, he adds, which “reinforces our understanding that these primitive meteorites represent the building blocks from which we can assemble terrestrial planets. And that includes Earth.”

These clues from beyond the Earth can give us a sense of the key players in the planet’s composition, as can volcanic rocks that contain pieces of the Earth’s mantle. Then, mineral physicists like Campbell and Mao figure out how these elements must be distributed in order for the seismology data to add up.

“I would argue this is how we understand that the Earth’s core is rich in iron and not some other heavy element,” Campbell says. Seismology tells us the Earth has a solid, dense core. Since the sun and meteorites contain more iron than other heavy elements like cobalt, nickel, or chromium, he says, “we know that iron is a really big part of the building blocks from which we’re assembled.”

Mineral physicists also find ways to mimic conditions within the Earth that affect the materials that make it up. For instance, Mao has done studies to learn how the iron at the Earth’s core could have settled there long ago, slowly working its way through the rocky mantle. To simulate the intense pressure within the Earth, she uses what’s called a diamond anvil cell. “We take two diamonds and then basically cut off the tip, take that small surface area, put a little sample in between them, and then squeeze the backs,” she says. Since the force is concentrated on such a small surface area, about the width of a human hair, it’s compounded in a way comparable to the pressure deep within the planet.

“One of the most exciting, but also frustrating, parts about these studies is that we can’t go down to that depth,” says Mao. “There’s theory that makes sense, that’s consistent with experimental data, because we can try to mimic what we think the conditions are, albeit micron-sized.”

And since scientists haven’t found a way to travel to the center of the Earth, the collaboration between these different disciplines is critical to understanding what lies beneath our feet. “Without kind of working together,” says Lekić, “you can't really understand the planet.”