Hundreds of Molecules Explain the “Taste” and “Smell” of Coral Reefs

Scientists might one day monitor these crucial chemical signals to determine the health of marine ecosystems. 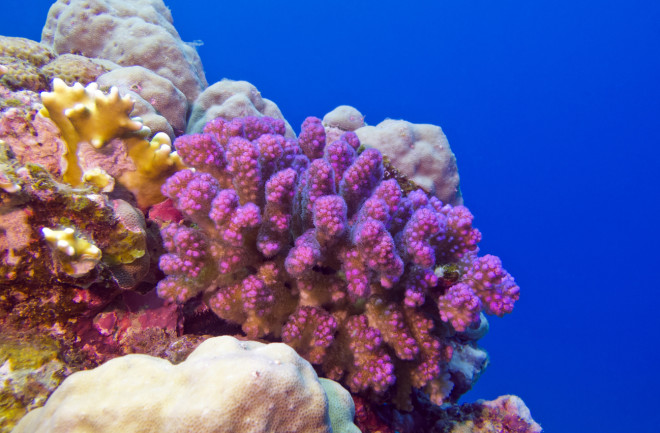 Corals may lack taste buds, nostrils and a brain, but the tiny reef-builders aren’t totally senseless: Their chemoreceptor cells can detect gaseous molecules floating around in the water, many of which are created by corals themselves during photosynthesis. “It’s the way that these invertebrates ‘taste’ and ‘smell,’” says Linda Wegley Kelly, a marine microbiologist at the University of California, San Diego’s Scripps Institution of Oceanography. “And it’s very profound.”

Researchers have long suspected that these molecules are essential for the growth of various microbes, plants and animals that inhabit coral reefs. But the chemical compositions of the dissolved molecules, as well as how many are even out there, remain a nagging mystery — one that’s becoming more dire by the day as coral reefs worldwide lose a war against ocean warming, ocean acidification and human misuse and overuse.

In fact, a global analysis released by the National Oceanic and Atmospheric Administration last October found that 14 percent of reefs vanished between 2009 and 2018; that’s more than all the coral currently in Australia’s reefs. And because reefs are responsible for supporting at least a quarter of all marine life, understanding what their loss means for the chemistry of remaining ecosystems is critical.

“Coral reefs are really well known for being these oases of life and activity in an ocean desert,” Wegley Kelly adds. “And all these invisible [molecules] are really part of the puzzle. You can’t see them with the naked eye, but they’re so dynamic.”

Earlier this year, Wegley Kelly and a team of international researchers published a snapshot in PNAS of the covert chemicals released by two species of coral and three types of algae in the reefs of French Polynesia. Unlike these organisms, however, the human team couldn’t simply take a big "sniff" underwater.

Instead, they incubated the specimens in small aquariums for an eight-hour daytime period, during which photosynthesis occurred, and a separate eight-hour nighttime period. The reefwater that Wegley Kelly and her colleagues extracted and analyzed after each period — using a technique known as untargeted tandem mass spectrometry — revealed more than 1,000 distinct molecules, including modified amino acids, vitamins and steroids.

Because these molecules become part of a complex food web as they’re taken up by the reef’s microbial communities, she says, the researchers also examined how bacteria in the aquariums responded to this buffet of tasty chemicals. Molecules released by algae were more “chemically reduced,” potentially providing more energy to bacteria, for example. But those released by corals contained much higher levels of important nutrients like nitrogen and phosphorus.

As a result, some bacteria grew fast, some grew fat and others grew in high numbers. “We're also seeing this happen on a natural reef, when that reef changes because of anthropogenic disturbances,” says Wegley Kelly. “When you remove too many of the fish that graze algae, for example, the algae overgrow the coral.” That, in turn, impacts microbial communities.

It’s not only about the food web. Just as a whiff of something stinky can send you running in another direction, the molecules released by corals may have a similar effect on their neighbors.

A 2014 study published in Science reported that damaged corals may emit chemicals that drive away young corals and fish, lessening the likelihood that future marine migrants will settle down in the dying neighborhood, so to speak. This could mean that merely cordoning off damaged reefs from human activity won’t be enough to revitalize them. On the other hand, with reefs that haven’t yet displayed visual markers such as lesions and bleaching, the cocktail of chemicals in the water could clue researchers in to unseen stresses.

“I think that you could use the chemistry to diagnose the health of the reef, certainly,” says Wegley Kelly, adding that more than 85 percent of the molecules her team identified were unique to just one organism — a remarkable specificity. “We've talked about doing these global surveys of the chemical milieu of reefs, all over the world, just to see how they would compare.”

In the future, her team plans to look at what else the molecules get up to while floating around reefs. Which disappear rapidly? Which build up in the water? Are some taken up directly by other species? These answers could bring researchers a step closer to preserving our oceanic oases.

What Factors Matter Most For Weight Loss?

Blessed Are The (Tiny) Cheesemakers