Hurricane Sam: What a Long, Strong Trip It's Been

Powerful and long-lived, Sam is heading for a dramatic encounter as it moves further north. 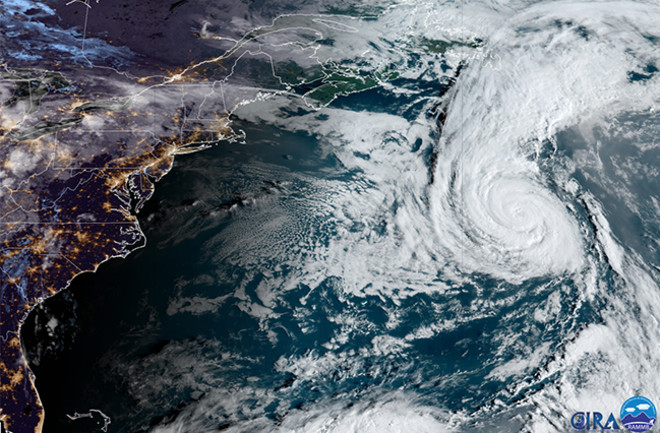 Hurricane Sam churns in Atlantic Ocean early on October 3rd, 2021, as seen by the GOES-16 weather satellite. By a metric known as Accumulated Cyclone Energy, or ACE, Sam was the most energetic hurricane of the 2021 season. (Credit: RAMMB/CIRA)

After churning through the Atlantic for nearly eight days as a major hurricane, Sam has finally weakened to a Category 2 storm.

Given its longevity as a Category 3+ storm, Sam has had one of the longest runs as a major hurricane in the Atlantic basin. In the satellite monitoring era, which began in 1966, it's tied for fourth place with Hurricane Edouard in 1996.

"It has been an impressively long lived major hurricane," says Philippe Papin, a hurricane specialist at the National Hurricane Center. "We are fortunate that it avoided land for its lifespan."

All told, Sam has travelled more than 3,000 miles as a hurricane. And by a metric known as Accumulated Cyclone Energy, or ACE, "Sam has been the most energetic hurricane of the season," writes Washington Post meteorologist Matthew Capucci.

ACE is a measure that takes into account both the strength and duration of a storm. "Sam beat out Ida, a potent but comparatively short-lived storm, and also edged out Larry, which tracked all the way from the tropics to near Greenland," Capucci notes.

Sam is forecast to weaken by Monday as it moves beyond the northern edge of the warm Gulf Stream into much cooler waters. It should then transition into a powerful extratropical storm, still retaining hurricane strength as it moves to the north and east.

Ultimately, the storm is forecast to be captured by a large low pressure system to its north. This should cause its wind field to expand dramatically — as this animation from Papin shows:

The animation portrays both Sam's past and future evolution. For the first ten seconds, satellite imagery shows the hurricane churning in the Atlantic Ocean. Annotations show the large-scale features steering the storm: the low pressure region to the north, and a high pressure ridge to the east.

Then the animation transitions to a visualization of Sam's forecast track through the North Atlantic, based on output of the GFS 0.25 forecast model, initialized at 8 p.m., October 1 Eastern Daylight Time, and running until 2 p.m. on October 5. (When a weather model is initialized, it tries to represent the actual observed conditions just before the start of the forecast period.) As the forecast part of the animation progresses, you can see the storm being captured by the large low pressure system. This dramatic interaction, occurring to the east of Newfoundland and south of Greenland, causes Sam's wind field to more than double by the end of the animation, measuring about 2,000 kilometers, or 1,243 miles, across.

"This wind field would be particularly large," Papin says.

Although no longer a hurricane at the time of capture, it should still retain a defining characteristic of hurricanes, according to Papin: a warm core. A low pressure system like the one forecast to capture Sam, is characterized by cooler temperatures at its core than its surroundings. By contrast, hurricanes have warmer cores than their surroundings.

The current forecast from the National Hurricane Center shows Sam continuing to move to the northeast until Thursday, with tropical-storm-force winds far from its center arriving along the southwest coast of Iceland that morning. The storm may then turn toward Greenland. But it's still a little too soon to know its ultimate fate.

One thing is for sure: I wouldn't want to be in a boat in the far North Atlantic this week!

We're now headed toward the finish of the 2021 hurricane season. And it looks like there could be quite a bit more storminess ahead.

"There are some signals later in October/November that could point towards an active part to the end of the season," Papin says.

Chief among them, in his view, is the brewing La Niña in the tropical Pacific Ocean. La Niña typically tends to enhance activity of tropical cyclones in the Atlatnic Basin.

Cooler than average sea surface temperatures in the tropical Pacific Ocean herald the likely development of La Niña, which tends to favor hurricane activity in the Atlantic basin. Meanwhile, warmer than normal sea surface temperatures in the Main Development Region, or MDR, could help fuel formation and growth of storms as the 2021 hurricane season is drawing to a close. (Credit: SST anomaly map from NOAA, with annotations added)

Abnormally warm sea surface temperatures — the jet fuel of hurricanes — extending between the west coast of Africa and the Carribbean Sea could also help make the end of the Atlantic hurricane season more active than normal. This area is known as the "Main Development Region," or MDR, because the majority of major Atlantic hurricanes are born of disturbances that form there.

Given these and other factors, things could get interesting during the second half of October. "However, I think it's quite unlikely we will see the same magnitude of activity as seen last year, which was the most active October/November period on record," Papin says.