Latin Is Dead, but Not Extinct

Technically speaking, the language followed Rome to the grave. That makes its grip on life even more impressive. 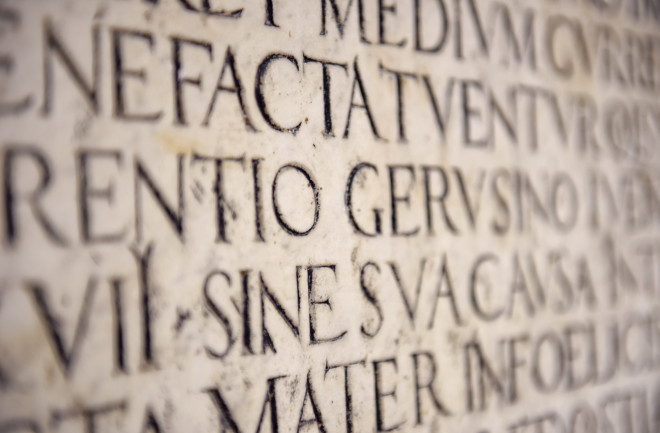 No community has claimed Latin as its native tongue since the collapse of the empire that sowed its grammar and lexicon across the ancient world. For a language that officially died more than a thousand years ago, however, it clings to life with all the tenacity of a Roman legion.

From the Renaissance through the 18th century, Latin served as the lingua franca for a monumental wave of intellectual progress — to the extent that its hold on the scholarly world is apparent even today. In the courtroom, defendants challenge unlawful imprisonment by applying for habeas corpus. In the laboratory, scientists assign names like Homo sapiens to each newly discovered species. And many who attended high school in recent decades have memories (fond or otherwise) of parsing sentences by the Roman writers Seneca, Ovid and Cicero.

On the religious front, Latin rode out the Middle Ages in the mouths and pens of the Roman Catholic Church, which preserved it in its “ecclesiastical” form. This dialect remains an official language of Vatican City: the church still employs it in papal documents and Catholics there enjoy its solemn intonations at Sunday Mass.

Interwoven as Latin is with contemporary culture, its pulse seems steady (if a bit fainter than 1,500 years ago). In what sense, then, is it truly dead?

From a linguistic perspective, the answer is straightforward: Latin drew its final breath in the first millennium. That said, “a dead language isn’t what people think it is,” explains John Fisher, a classics professor at Rutgers University. Unlike biological death, linguistic death occurs in stages and experts can place every language into one of three categories.

A living language, such as English or Arabic, is one that people learn organically from infancy and use in everyday life. Then there are dead languages, still studied and spoken, but only in specific contexts. These encompass the “classical” languages, such as Sanskrit and Old Chinese. Lastly, extinct languages (typically those of indigenous groups) are no longer spoken at all.

In this framework, Latin fits unambiguously in the second category. But that classification is only clear in hindsight; paradoxically, no one living during the period it died could have established a definite time of death. We can only do so, imprecisely, from the future. That’s because Latin did not so much die as morph into a plethora of descendants we now call the Romance languages.

We tend to regard the scions of Latin — Italian, Spanish and French, among others — as more or less finished products. It’s easy to forget, therefore, that each emerged over time from minor alterations to a single blueprint.

It’s not as if post-imperial Europeans awoke on the first of January, 477 A.D., in a state of Babel-like confusion; they simply went on speaking Latin. Like all languages, it evolved at a glacial pace. A vowel shift here. A new tense there. Presumably, the linguistic forces at play went undetected. “These things happen over generations,” Fisher says. “That’s why no one notices.” Nevertheless, in the absence of a unifying Romanism, the language developed independently in different regions and eventually begot the diverse tongues of the Romance languages.

There were a few fuzzy centuries, an intermediate era, when various languages spoken across Europe were almost-but-not-quite Latin. It’s the same dilemma faced in the “Ship of Theseus” thought experiment: How many wooden planks can you replace before the ship ceases to be the same one? How far can a language stray before it requires a new name? These are questions without definite answers.

As English speakers, a parallel linguistic history may offer some perspective. We inherited our language from a succession of English-like predecessors. Because this lineage has only one surviving heir, we name the forebears after it: Old English, Middle English and Early Modern English. If not for Latin’s many other branches, we might think of Italian in the same way — not as the closest living relative of Latin, but as its latest iteration.

Despite Latin’s formal designation as deceased, a growing contingent hopes to revive it. Dubbed the “Living Latin” movement, this global network learns and teaches the language not as a stony artifact, but as a vibrant medium of communication in the present day.

Essentially, its practitioners emphasize speaking (the cornerstone of any living language) over reading and writing (the historical focus of Latin education). Some have even made an effort to expand the ancient vocabulary, describing features of the modern world and thereby opening the language to twenty-first century needs. The Vatican occasionally updates its Lexicon Recentis Latinitatis, a New Latin dictionary, with words for neologisms like computer (instrumentum computatórium) and cellphone (telephonum gestabile).

These additions aside, Fisher says, “classical Latin is incredibly stable.” If a language isn’t changing, that’s a sign it’s gone under.

Although the goal of “Living Latin” isn’t necessarily to build a community of native Latin speakers, the endeavor wouldn’t be without precedent. Some 9 million people speak Hebrew as a first language today, but 150 years ago it was worse off than even Latin — and had been since the second century. Hebrew only regained widespread use after Jews from across Europe began migrating to Palestine in the late 1800s and, in that melting pot, resurrected it as the common tongue. Hebrew is, so far, the only language in history to truly rise from the grave.

It remains to be seen whether Latin will ever be rescued from linguistic death. But, unlike so many of the world’s roughly 7,000 languages, it seems in no danger of succumbing to the greater death of being utterly forgotten, so long as the coming generations find value in it too. Cicero said it best: “The life of the dead is placed in the memory of the living.”