It's been 26 years since Ruapehu's last major eruption, but signs on the volcano are hinting that the volcano might be waking up. 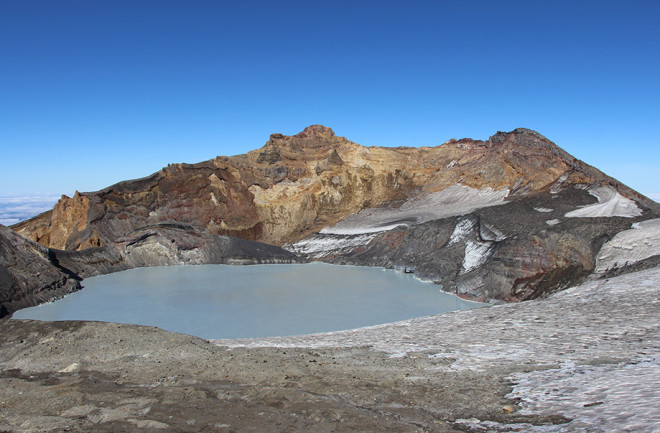 One of the most picturesque volcanoes on the planet is New Zealand's Ruapehu. One of the three volcanoes near the famed Tongariro Crossing (the other two being the crossings namesake and Ngauruhoe), Ruapehu hosts multiple ski areas and is one of the biggest tourist destinations on the North Island.

Of course, it is also an active volcano. The summit hosts a warm crater lake (Te Wai ā-moe) that sees changes in chemistry and temperature thanks to the hydrothermal system and magma under the volcano's summit. The last major eruption was in 1996, where ash coated the region for months. Mudflows formed from the erupting material mixing with the Ruapehu's snow and ice. Some minor, mainly steam-driven eruptions have followed over the past two decades, but mostly Ruapehu has remained quiet.

A view of Ruapehu from the north during the peak of summer 2009. Credit: Erik Klemetti

That is, until now. GNS Science, New Zealand's volcano monitoring agency, keeps track of all the changes at Ruapehu, including the composition and temperature of the crater lake, earthquakes, deformation and thermal information. The crater lake goes through cycles of heating and cooling regularly, but it is thought that these relate to cycling of warm water in the volcano rather than magma moving upwards heating the lake.

However, over the past month, the crater lake has been heating -- and not following the usual script of its normal thermal cycles. As of April 19, the water temperature sat at 37°C and steady. GNS Science thinks this level of heat requires a lot more energy to sustain than the normal hydrothermal changes, so the culprit is likely magma rising within the volcano.

That's really not enough to change the alert status at Ruapehu. You throw in volcanic tremor -- shaking of the ground usually caused by magma movement -- and that is what gets Ruapehu to Alert Level 2. This level is the last stop before eruption, but doesn't mean an eruption will occur. It represents "moderate to heightened volcanic unrest" ... so people should start to prepare.

Skiers at the Whakapapa Ski Field on Ruapehu, with a view to Ngaurahoe and Tongariro. Credit: Wikipedia.

In that vein, local officials have set up a 2-km exclusion zone around the crater lake at Ruapehu. This hasn't impacted the operations of the ski areas on the volcano, which report that they remain busy. We're currently coming out of the New Zealand summer into the winter ski season, so an eruption now could hurt the ski areas and tourist towns after multiple years of COVID restrictions.

With all the current evidence presenting itself at Ruapehu, GNS Science still thinks no eruption is the likeliest scenario and even if one does happen, it might be relatively small. However, even small eruptions can produce mudflows that could be hazardous or deadly to people along the river valleys heading off the volcano.

It might be a long few weeks for the residents and tourists around the Tongariro Crossing and Ruapehu. The volcano could keep ramping up or settle down, but it is by no means on any particular time table.