The Term 'Spirit Animal' Means More Than Your Favorite Animal

The diversity of Indigenous beliefs goes much deeper than a 'spirit animal' Facebook quiz with loose connections to Native American culture. 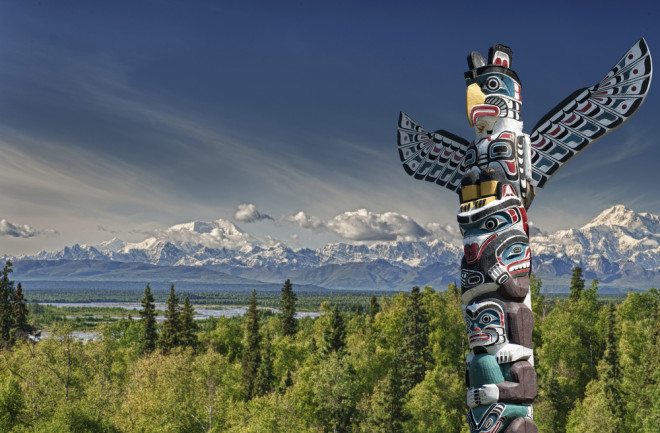 This article was originally published on March 24, 2021.

It’s difficult to pinpoint how old the concept of a spirit animal is — at least in those words — but the notion is nearly ubiquitous in some corners of the internet and social media. While most of the time the term is simply used to express your favorite kind of animal or childhood idol, the associated images online often stereotype Indigenous people or appropriate and misconceive real religious beliefs.

“What I hate about those memes, and what a lot of other people hate about them, is that they almost always go along with stereotypes about Indians,” says Pinny Lavalier, a Sicangu Lakota volunteer at Native Languages of the Americas, an organization dedicated to preserving Indigenous languages. She describes Facebook quizzes accompanied with images of bears wearing a feathered headdress, or “an Indian woman in her underwear hugging a wolf.” She says that “dehumanizing” image “makes us seem like animals or mystic savages who talk to animals all day.”

For Lavalier and many others, the origin of the term spirit animal is unclear. It may have come from some sort of New Age spirituality, but the problem comes when the concept is misused in a way that trivializes generations of deep Indigenous belief from a host of different cultures.

“Animals have sustained our people for thousands of years, through food and medicine and clothing,” says Renee Gokey, teacher’s services coordinator at the Smithsonian Institution’s National Museum of the American Indian in Washington, D.C.

Gokey says teachers and parents commonly ask her about spirit animals. She tries to focus more on educating and providing resources online or in books like Do All Indians Live in Tipis? about the cultural context behind terms like this.

“Clan and kinship systems are diverse among the 577 different Native American tribes,” Gokey says. “Many of us still do have our clan system in place.”

In her Eastern Shawnee Tribe of Oklahoma, for example, clans represent  ancestral relations to specific animals that have been in place for a long time. After an infant is born, an elder who speaks the language will give a name to the baby reflecting a different animal clan, though it can sometimes happen later in life as well. Gokey’s own Shawnee name, which she doesn’t share outside of her people, translates to “when the turtle brings her head out of water and goes to land, there is strength.” She got the name, which indicates she’s part of the turtle clan, when she was about 25 years old. The inspiration for the name might be based on a dream the name-giver had, or based on observation of the baby. Or it could even be based on the needs of the community, as different clans play important roles in Eastern Shawnee ceremony.

“These things aren’t taken lightly. In our Shawnee tribe, there’s a particular ceremony,” Gokey says. “They’re these old ancestral relationships that have been in place for a long time.”

Some of these clans have been lost over time through forced colonialization, like much of Indigenous culture. “So much was taken from us or outlawed by government policy and colonialism: our land, our families, ceremonies, ways of life, foods and education systems,” she says, adding that this loss of culture is partly what makes this is a sensitive issue. “It can feel trivial and shallow for people not part of our communities to try and take or mimic it themselves when they don’t understand it.”

The particular meaning of different animals to Indigenous people varies greatly based on which culture you’re talking about. The Heiltsuk Nation and people from the surrounding tribes in British Columbia typically identify with an animal that is often depicted artistically on a crest, says William Housty, conservation manager for the Heiltsuk Integrated Resource Management Department.

In Bella Bella, where he lives, there are five main crests such as the eagle or orca. “It all goes back to mythical times in our oral history,” Housty says. Heiltsuk believe humans could change into the animals of their crest in the distant past, he says. They eventually lost the ability when humans and animals diversified, but people still maintain a particular connection to their crest animal.

“My grandmother is a wolf, and my grandfather is an eagle,” he says, adding that his family’s crest design includes both animals together. Some Heiltsuk and other First Nations groups in the region put their ceremonial crest on blankets, or might get tattoos displaying them, while others will put their crest on totem poles, with animals strategically arranged based on family history.

Laura Redish, director and co-founder of Native Languages of the Americas, says the English phrase may never have been considered an appropriation of Indigenous culture if it wasn’t for New Age spirituality marketing it as something “learned from Native American wisdom.” Indigenous people who have had bad experiences with New Age practitioners may have strong feelings about the term, while others won’t care as the term likely has little connection with real beliefs.

In other words, the idea of having an animal to relate to, or that inspires you, isn’t offensive. Even the Harry Potter movies talk about a Patronus, a fictional creation by the author that represents a type of magical animal that protects you. Terms like Patronus might be a better fit for these pop culture references.

Lavalier says this connection with animals isn’t limited to American Indigenous beliefs. Animals were likely important in the religions of European ancestors, or other traditional societies, so it’s unfortunate that many modern uses of the term try to relate spirit animals vaguely to a monolithic understanding of Native American culture.

“In theory, it’s quite harmless if white teenagers want to say their spirit animal is a wolf, but in practice it goes along with dehumanizing us, so no wonder we do not appreciate it,” Lavalier says. “If it’s not intended as cultural appropriation then why aren’t the pictures ever of white cavemen running around with wolves?”