When it comes to maintaining your furry friend's litter box, always follow the science. 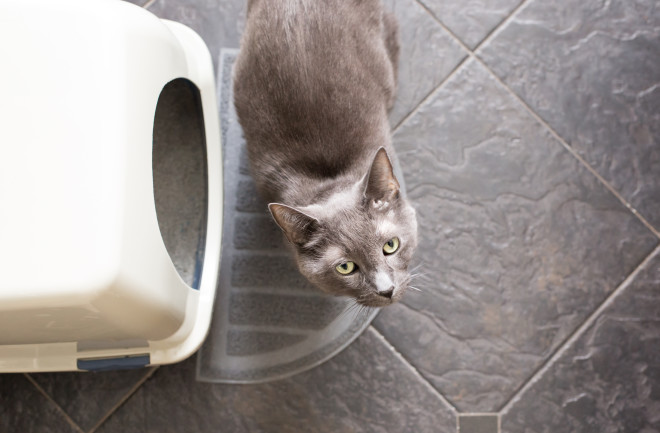 If you're a cat owner, you already know that litter boxes are super important. But veterinarians still see owners making plenty of mistakes with them. For starters, many cat owners make decisions based on things they want, rather than what may be best for the cat, says Fiia Jokela, veterinarian and owner of Chicagoland Veterinary Behavior Consultants. She says humans go into the pet store with their credit card and select the box they like, but “if the cat had the credit card it’d go, ‘Oh, no, no, no, that does not look like a toilet to me.’”

Improper management of litter boxes and inadequate resources in the house can also induce stress in your feline friend, says Jokela. Beyond that, veterinarian Christine Fellacher says behavioral problems, such as house soiling, are often related to issues with litter boxes too.  “Oftentimes if they do urinate outside the litter box it's because they're stressed out about something,” adds Marina Jaworsky, associate veterinarian at GreenTree Animal Hospital. Stress can lead to other health issues for a cat, such as a flare up of the herpes virus or painful bladder conditions.

Try these litter box recommendations backed by experts and scientists to help keep your cat as happy, comfortable and stress-free as possible:

Make sure the litter box is clean. “Cats are very fastidious,” Jokela says. She references how humans immediately leave a bathroom stall in a public restroom if someone didn’t flush the toilet before them. One 2019 study revealed cats “were often observed eliminating immediately post-scooping of the litter boxes,” which confirmed that “litter cleanliness plays a critical role in elimination behavior.”  Beyond making sure the box is cleaned regularly, says Jaworksy, it's important to provide your cats with different bathroom options, too.

Have More Than One

All five veterinarians Discover spoke to for this story recommend following the “N+1 rule.” What does this mean? Simply put, it’s best to have an extra litter box for every cat in the house. If you have one cat, you should have two litter boxes; if you have three cats, you should have four. Jaworsky recommends placing them in different parts of the house that are convenient for the cat. In a cat's eyes, placing two litter boxes next to each other is essentially creating one giant litter box, she adds.

Be Thoughtful About Placement

Many experts say people place the litter box where they want it and not where the cat would prefer it. Take older cats who may be arthritic. “If the boxes are always down in the basement, they have to go up and down stairs,” says Jokela. Beyond being inconvenient, poor placement like this can even hurt your pet.

The key is finding a quiet and easily accessible spot with privacy, says Fellacher. “Would you want to have a porta-potty in the middle of a highway? Not so much." The laundry room is a common location for a litter box, but the noise from the washer and dryer can make cats stressed, says M. Leanne Lilly, veterinarian and clinical assistant professor at Ohio State University. And scientists and veterinarians know that a stressed-out cat can lead to other health and behavioral issues.

Go For a Covered Box

Wondering if you should get a closed litter box or an open one? A 2019 study asked that very question. The participants had to follow certain requirements, such as having the litter boxes in a quiet space and enough for the number of cats in the home. The researchers found the cats favored the covered litter box, finding more feces in the covered box versus the uncovered box. Plus, this preference became even more pronounced when the covered litter box had a larger surface area than its uncovered counterpart.

Make Sure It's Big Enough

Making sure the litter box is large enough is important too. Jokela recommends the box to be “at least the length of a cat and a half of their body, at a minimum.” A 2014 research study placed two different sized litter boxes at opposite ends of the room. The results? The larger boxes were indeed favored.

When it comes to scented or unscented litter, veterinarians mostly recommend unscented. “All that perfumy stuff is sometimes kind of annoying,” says Jokela, although some studies suggest cats might not mind it. In a 2011 study, 16 cats showed a preference for unscented litter, whereas 12 preferred the litter with a floral scent. Another 2007 study investigated the effect of Zero Odor spray as opposed to no spray while looking into litter box preference. The researchers found that the spray helped to decrease the smell of the litter box and boost its attractiveness to cats.

Read More: 8 Do’s and Don’ts for Communicating with Your Cat

Ancient cats were desert dwellers, with plenty of space to turn around and dig. So when you bring a cat, or cats, into your home it’s important to “think like a cat,” says Jokela. While there are many reasons your cat may get stressed out, following these tips may help solve their problems — and by extension, yours, too.