Sizing Up Last Year's Eruption in the Canary Islands

As impressive and destructive as the 2021 eruption on La Palma may have been, it was still a middle-of-the-road volcanic eruption. 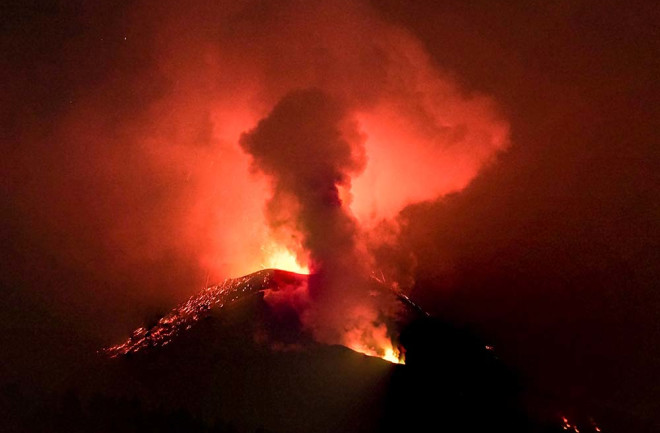 A view of the Cumbre Viejo eruption on La Palma seen on November 11, 2021. Credit: Wikimedia Commons.

One of the most damaging volcanic eruptions from 2021 was the event on La Palma in the Canary Islands. The eruption lasted for months and ended up burying a significant part of the communities that had built up on its slopes. Thankfully, it was an eruption that didn't end up taking lives, but the damage was estimated to be at least $1 billion. As it turns out, the eruption itself compared to others was relatively small, but the human impact was much larger.

A new study in Nature by Riccardo Civico and others has given us high resolution digital elevation models (DEMs) of the La Palma eruption. These models were built from over 12,000 images to create a map that has a resolution of 0.2 millimetres per pixel (below). That's 0.007 inches per pixel, or roughly the size of two sheets of paper stacked together on edge. Now that is high resolution! These data mean we can truly size up what happened. It turns out that the lava flows and volcanic debris from the new cone that formed on the volcano were more than impressive.

High Resolution DEM of the 2021 La Palma Eruption. Credit: Civico and others (2022) in Nature / INVOLCAN.

Putting a Scale on the Lava

Over the course of 85 days, the area on the Cumbre Vieja rift on La Palma saw over 7 billion cubic feet (0.2 cubic kilometres) of lava and debris pour out. Although that sounds like a lot, it is 1/7 the size of the 2018 Kīlauea eruption and 1/5 the size of the 2014-15 Holuhraun eruption in Iceland. One historic eruption that was pretty close to the same scale as La Palma was the famed 1943-52 Paricutín eruption in Mexico. All these eruptions are good comparisons because they erupted very similar types of lava in similar styles.

The volcanic cone that was built during the eruption (see above) totalled 1.3 billion cubic feet. To put that in some perspective, that is roughly equal to 15 Great Pyramids of Giza. Not too shabby for 3 months of volcanic activity. All of this was happening at an eruption rate of between ~700-1700 cubic feet per second (20-50 cubic meters per second). That is something around 66-166 tons (60,000-150,000 kilograms) of lava and debris coming out of the vents per second!

These kinds of numbers are hard to put into any context that we are familiar in our day-to-day life. However, in terms of volcanic eruptions, they really aren't that out of the ordinary. Volcanic activity is just that vigorous on our planet! Even what is considered a fairly small-to-moderate sized eruption -- ranking as a 3 on the Volcanic Explosivity Index -- seems astonishing.

Lava Flow Map for the 2021 La Palma Eruption, using elevation change as a proxy for new lava flow deposits. Credit: Civico and others (2022) in Nature.

It turns out that the chemical properties of the magma also helped them flow out so far and quickly. The lava itself was rich in alkali elements like sodium and potassium -- a lava called a basanite. This type of lava is similar to basalt (the stuff that erupts in Hawai'i) but it is much less viscous (sticky), so it could flow faster and further than its Hawaiian counterpart.

Right now, Cumbre Viejo on La Palma is relatively quiet as the eruption was declared over in December 2021. There have been occasional earthquake swarms and the ground underneath parts of the new cone are still glowing with the heat of the cooling lava. Maybe La Palma will go back to sleep for 50 years like it did after the 1971 eruption. Maybe it will start erupting again this year. We don't know (and anyone who says otherwise is selling something). Volcanologists will just keep on monitoring the volcano for signs of potential unrest on this island volcano in the Atlantic.