Though rhinos are now found largely in Africa and Asia, their ancestors roamed the Americas millions of years ago. 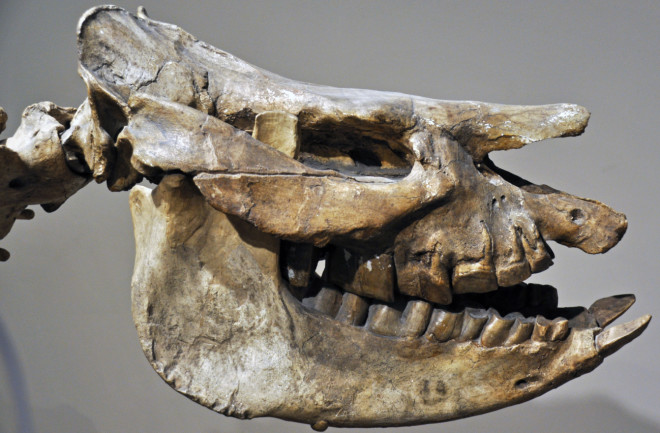 When we think of the rhinoceros, we tend to think of Africa — where white and black rhinos still live today. About 27,000 of these rhinos exist in the wild, mostly in national parks and reserves. Most are white rhinos because black, Javan and Sumatran rhinos are all critically endangered.

Read More: The Plight of the World’s Most Populous Rhinoceros

But rhinos didn’t used to be confined to Africa and tiny bits of Southeast Asia. They once roamed the globe and could be found widely in North America.

Rhinos, along with horses and tapirs, are all perissodactyls that evolved together in North America around 55 million years ago, says Larisa DeSantis, a paleontologist at Vanderbilt University. “The earliest rhinos would have been much smaller, like a dog, and they would have had more elongated limbs compared to those we see today,” she says.

The species spread widely across the continent, from Florida to Nebraska and Tennessee. Some even resided in Central America, in modern-day Panama. All of them were herbivores, though some were obligate browsers, meaning they fed on leaves and soft shoots from trees. Still other species were obligate grazers; they fed on grasses and shrubs in more open fields.

North America was home to around 40 to 50 species of rhinos at one time or another, says Richard Hulbert, a vertebrate paleontologist at the Florida Museum of Natural History. But the last of these rhinos were likely Teleoceras and Aphelops, which both lived some 4.5 to 5 million years ago. “They were the last survivors in North America,” Hulbert says.

Both were large mammals — around the same size of those that we see today in Africa. Teleoceras had stubby legs, says Hulbert, and “a big barrel chest.” It might have resembled a modern hippo in body type, though “there’s debate among experts as to whether [Teleoceras] had an aquatic lifestyle or not,” he says. The species would have been more of a grazer, like the white rhino.

Neither Teleoceras nor Aphelops had dominate horns like those seen today. Instead, the former possessed a smaller horn on the tip of its nose while the latter had no horn at all (and much longer legs). Both species boasted tusk-like lower incisors, says Hulbert, which protruded from their lower jaws. Teleoceras also had an upper incisor that was meant to keep the lower incisor edged, like a knife sharpener, says Hulbert.

The Ashfall Fossil Beds in Nebraska have an entire herd of preserved Teleoceras rhinos, killed by a volcanic eruption millions of years ago. DeSantis says this “Pompeii of rhinos” provides us with a deeper window into how they lived. Researchers have uncovered a preserved mother and child, along with males; from this, they determined that the males tended to have larger lower incisors.

The teeth were likely used in combat, during which young males fought with older, more experienced males for dominance. Another site in Florida, says Hulbert, shows that young males were much more likely to die than young females because of this combat.

Rhinos remained widespread across North America until around 5 million years ago. This was largely before other large mammals, like mammoths and mastodons, disappeared — and it begs the question what happened. Both DeSantis and Hulbert agree that we don’t really know for sure: “That’s the million-dollar question,” says DeSantis.

It’s generally thought that those who survived were better suited for grasslands. This is because, at the time, the plains were just beginning to open up. Although some of the rhinos, including Teleoceras, were grazers, the plains simply might have become too dry for them. “Today, they can survive on the African savanna,” says Hulbert, “but it’s possible that the species living in North America wasn’t adapted to that kind of ecosystem.”

It's true that there’s a lot we don’t know. But unlike the demise of the ancient rhinos, we know that poaching and habitat destruction are the biggest threats to the rhinos that survive today. And for a species that has persisted for 55 million years, it seems the least we can do is protect their surviving descendants at all costs.

How the Age of Reptiles Began 250 Million Years Ago

A Leading Theory Behind Neanderthal Extinction May Surprise You