Multiple research efforts are recording and analyzing the advanced clicks and unique vocalizations of whales in the ocean. The work could reveal similarities between human and cetacean behaviors. 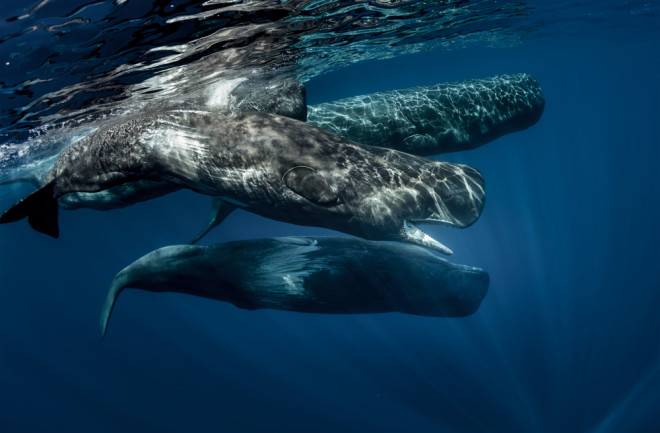 In one research video, a man peers over the edge of a boat at a white beluga whale just inches away. The researcher, part of a group called DareWin that collects whale and dolphin sounds from all over the world, plays a harmonica in three tones, over and over. Just like a scene from the Disney classic, Free Willy, the whale appears to respond.

The smooth creature floats close to the boat, head bobbing out of the water, looking almost expectantly at the man and circling back. It’s a response that can only be described as listening.

In recent years, scientists, audio engineers and machine-learning specialists have been making strides in our ability to listen back. Around the world, they’re trying to demystify whale communication, from sperm whale’s codas to orca clicks. They’re swimming with whales, constructing noninvasive robot recorders and designing advanced models to find out if these massive creatures communicate in a way we can understand — or, perhaps, in a manner more complex than we can comprehend.

CETI (the Cetacean Translation Initiative), DareWin, and a team at the University of Erlangen-Nuremberg in Germany are just a few of the groups around the world attempting to collect recordings of whale communication. They’ll need hours and hours of recording to begin to parse out patterns, let alone meaning. And researchers think they’re still years away from having enough material to begin to understand the communication. But it’s a start.

Marine biologist David Gruber, with Baruch College at the City University of New York, founded the CETI effort. Over the next few years, he and a team that spans multiple disciplines plan to make better sense of sperm whale communication with the help of linguistics, innovative recording tools and machine-learning programs.

He describes the work as “a dream,” using many advanced tools and technology to bring humans closer together with an animal species. CETI is also harnessing the brain power at Harvard’s School of Engineering and Applied Sciences to build devices that could attach to the whales and record unobtrusively.

To date, researchers have gone to exhausting lengths to hear a whale’s call in the study of cetacean communication. The journey often requires locating a pod of whales in the vast ocean, securing and using expensive and novel equipment, then making a quality recording when and if the sea creatures make noises. An additional challenge is the fact that whales and dolphins are often quiet, according to researchers. “Most of the time, they don't even make sounds,” says biologist Fabrice Schnöller, founder of the DareWin program and ClickResearch.

DareWin’s solution? Start a conversation. While CETI aims to record whales in their natural habitat without human involvement (think eavesdropping), DareWin makes contact to elicit reactions. Free divers, including some professional champions who can hold their breath for many minutes, bring ultra-sensitive recording equipment into the water and try to form a relationship with the whales. “These people are very aquatic, and they can create a great situation with the animals,” Schnöller says. And the whales seem to react. “When they come, they're talking away, they make a lot of sounds,” he adds.

Whales have long been a source of fascination to humans, perhaps because of their incredible size, or their exceptional intelligence. “You see something happening in the way that they act is much more than curiosity,” says Schnöller, describing one of the first times he encountered the mammals. “These animals seem smart, just simply smart.”

Sperm whales are often the focus of research on whale communication because of the clicking sounds they only share with dolphins. They are also enormous, growing to more than 50 feet in length. They have the largest brains in the world — six times the weight of ours — with an enlarged area called the neocortex. In humans, the neocortex makes up most of the brain, and it’s involved in sensory perception, conscious thought and, most notably, language.

There seems to be parallels between how whales and dolphins interact and how humans do. Cetaceans, a group of animals that encompasses whales, dolphins and porpoises, navigate social relationships that might last decades, but also interact with strangers regularly.

Recently, Schnöller recalled a run-in with a baby sperm whale. The whale got ahold of the recording equipment — four hydrophones and five cameras — that Schnöller didn’t want to lose. Divers went after it, with no luck. But miraculously, four adult sperm whales surrounded the calf, clicking furiously, and within a minute, it released the equipment.

In addition to securing perfect audio from the event, Schnöller says the behavior was remarkable to witness. It was almost like words had been exchanged. “He released the thing and they stopped talking,” says Schnöller. “So maybe it was something like, ‘leave this thing. Stop this,’ I don't know. We can't prove it.”

One unique feature in some whales is their ability to copy new noises. In other words, they can imitate sounds, a behavior called vocal production learning. One white whale named Noc even echoed human speech in a babble that sounded eerily similar to English.

Dolphins and possibly sperm whales also have specific vocal labels to address and identify one another. Scientists in Scotland found that when they played these identifying sounds back at dolphins, the dolphins responded to those sounds by repeating them back, but they didn’t respond to other sounds.

On the other hand, there are facets of whale sounds that, to us, are completely novel. For one, there are the noises themselves. Sperm whales, as far as researchers can tell, use two kinds of communication: echolocation to discern nearby objects underwater, and longer-range sounds thought to allow communication with one another. Both are made up of short bursts called clicks. These sounds start behind the whale’s nostril, then reverberate inside the skull and come out through the front of their head. A series of clicks makes up a pattern called codas. The driving force of DareWin’s research is to find out whether or not the particular echolocation used to see (so to speak) is also used to communicate socially. Schnöller says this echolocation type conveys much more information than other clicks.

One remarkable observation is that whales don’t seem to trade off or take turns vocalizing, like humans do in conversation. They often make sounds together, in a duet of sorts. Schnöller says he has also observed, in some of the recordings, that the beginning of some whale sounds start off random and then get more specific, almost as if the song builds up to a more coherent communication.

The Mechanics of Communication

Researchers who study whale sounds often make one thing clear: They’re not trying to translate a language in the way that humans understand it. “The word ‘language,’ as I’ve learned, is a really charged word,” Gruber says. “There's all these defined boundaries for what is a language, and to say that animals have ‘language’ is still debatable and contentious.”

To Schnöller, we may not even be able to fully conceive of the purpose of whale sounds. He says there’s not even a scientific consensus on if whales use sonar, a key method of seeing in the water, to communicate. Though, he suspects they do. “To see in the water is another sense,” says Schnöller. “So we cannot know what it is. It's like if you try to explain to blind people what it means to see. You cannot, because they've never seen.”

For one, human language has a number of features that distinguish it, according to CETI’s roadmap (the plan guiding their research project). We use displacement, which means we can communicate about things that aren’t present. For example, we refer to tomorrow’s dinner or yesterday’s meeting. We also use something called recursion, loosely defined as the ability to embed a sentence in a sentence almost indefinitely: “Chris thinks they think he said she went…” and so on.

Researchers at CETI would need to nail down a few key aspects of whale communication in order to make any sense of it. They’d need to find patterns, and to do so would mean essentially beginning with the most frequent words. Perhaps that could be a word like the, according to Jacob Andreas, a natural language processing expert and member of CETI. You then try to set a certain sequence of numbers for each so-called word, and see which appear next to each other in similar environments, Andreas says: “Just that trick turns out to be a very, very effective way for automatically figuring out which words in natural languages at least behave in similar ways to each other.”

Project DareWin, on the other hand, approaches the issue from a different perspective entirely. It’s not enough to just listen to what is audible to the human ear. In order to get a more complete picture, they believe whale sounds must be broken down into even smaller elements. These are split-second clicks that are captured with highly sensitive equipment that Schnöller calls an antenna. The free divers hold this device close to the whales when they interact.

Schnöller also isn’t so interested in comparing whale communication with human language. In fact, he says, it could be that what whales are conveying is more advanced than what we could ever imagine. Maybe, he says, it could even take us down a notch as the self-declared top of Earth’s pecking order. “I don't think we need to understand it,” Schnöller says. “Even if we prove that there is something we cannot understand, and it's so crazy, efficient and complex that we could put ourselves a bit lower on the scale, this effect would open the door to something huge.”