One of the most powerful calderas on Earth has been experiencing earthquakes for the past few weeks, leading to a new alert but not necessarily towards any new eruption. 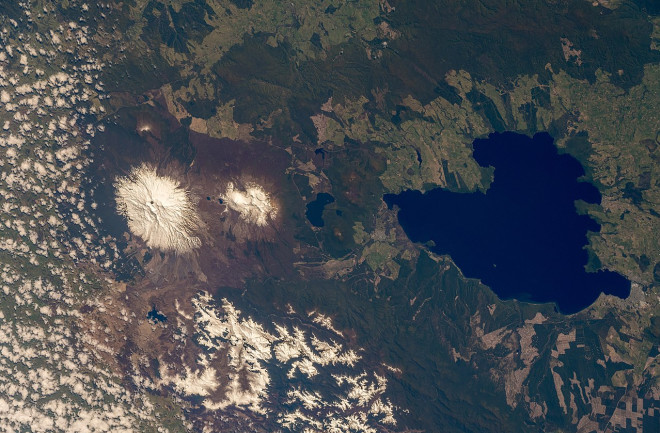 When it comes to powerful volcanic eruptions, it is hard to top Lake Taupō in New Zealand. What looks like a tranquil lake on the North Island is actually the remnants of massive explosions and collapses culminating in the 232 AD blast that may have been the largest eruption on Earth in the past few thousand years. For the most part, Taupō has been quiet since then, but a new bout of earthquakes and ground inflation under the lake has lead GNS Science to raise the alert status to Level 1 for the first time ever.

Let's get the elephant in the room out of the way: this new unrest does not mean that Taupō will have a massive eruption. Just like we talk about Yellowstone Caldera in Wyoming, Taupō has the ability to produce such gigantic blasts, but most of the time unrest like this leads to no eruption and if an eruption happens, it will be relatively small. This doesn't mean a "supereruption" isn't possible, just that the probability of one is very low.

So, what is going on at Lake Taupō? GNS Science has reported that there have been two earthquake swarms happening under and near the lake, producing hundreds of small temblors over the last few weeks. The largest was a M4.2 that occurred on September 10, 2022 that was felt across the area. These earthquakes are all located between 2.5 and 8 miles (4-13 kilometres) under the area.

This alone might not raise the alert status, but measurements of Lake Taupō's bottom suggest that part of it has been rising over the past few months as well. This inflation at Horomatangi Reef happening above one of the earthquake swarms (and above what is thought to be the magmatic system of Lake Taupō).

This sounds bad, but this unrest could be caused by any number of processes. Usually earthquakes and inflation under a volcano are interpreted as magma moving into the system. Remember, magma takes up space, so rocks fracture (earthquakes) and the land surface moves (inflation). Thing is, you can do the same thing with changes in hydrothermal circulation (hot water) in the crust.

This means that volcanologists monitoring Taupō will need to figure out which is more likely. We can use other clues like changes in the chemistry of gases being emitted from the volcano and changes in lake water chemistry and temperature (although Taupō is a big lake) to look for the signal of new magma coming in deep underneath the lake. Combine that with changes in the rate and size of earthquakes or rate and extent of uplift, and you can get an idea of just how much is changes and why.

A view from above the northern shores of Lake Taupō. Credit: Erik Klemetti

The History of Unrest at Taupō

Taupō has had 17 bouts of "unrest" over the past century and a half, none of which lead to any eruption. A few were much more intense than the current unrest, most recently in 1983-84. Taupō, like Yellowstone, is a restless caldera where unrest can be very common as things change deep underground without prompted anything at the surface.

If (and I stress if) Taupō does become volcanically active, the most likely scenario is a small-to-moderate eruption. GNS Science has drawn comparisons to the 1995-96 activity at nearby Ruapehu as a potential eruption scenario. Another option might be a hydrothermal explosion driven by superheated water.

The 232 AD eruption was, indeed, giant. The eruption column from the blast may have reached over 100,000 feet and rhyolite ash covered almost 8,000 square miles of the North Island. The largest Taupō eruption on record, the Oruanui, disgorged ~280 cubic miles (~1,200 cubic kilometres) of volcanic debris during a blast ~22,600 years ago, making it one of largest known eruptions ever.

It can always be concerning to hear that a volcano famous for colossal eruptions is being restless. There are a few key things to remember when you read about this sort of thing. First, in most cases, volcanologists are monitoring the volcano closely to make sure they can provide ample warning if an eruption happens. Second, mammoth eruptions are not the norm for most volcanoes, so don't assume a worst case scenario. Third, if you live near the volcano, listen to authorities and be prepared.

This might mean have a plan for quick evacuation or have supplies ready if an eruption strikes. There are many people online who want to stoke fears about volcanoes for whatever reason, so always be cautious and look to trustworthy sources for information (like GNS Science in this case). Lake Taupō has the potential for devastating eruptions, but we also have the potential for preventing it from becoming a true disaster.

From Earth Art to Extreme Weather: The Home Planet as Seen From Space in 2022, Part 1