Two new rovers, a helicopter and a satellite all set out this year to search for signs of ancient life. 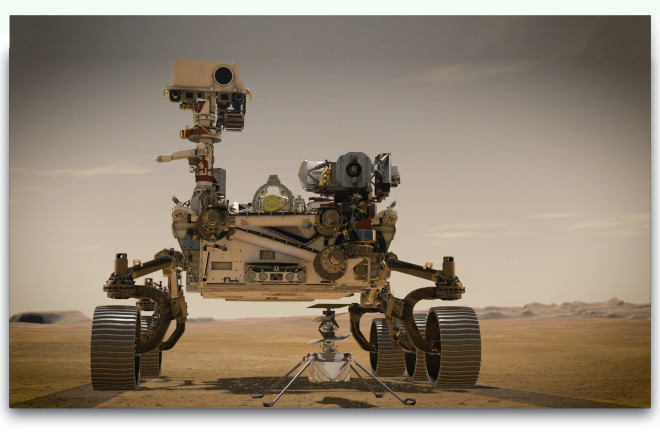 Humans have wondered if there’s ever been life on Mars for as long as we’ve known it’s a planet. We could soon have an answer. In February, NASA landed its Mars Perseverance rover, along with a companion helicopter, the intrepid Ingenuity, in an ancient river delta called Jezero Crater. The NASA mission, dubbed Mars2020, was designed to search for signs of ancient life and collect drilling samples to return to Earth for deeper analysis.

“For the first time, we are actually going to bring back cores from Mars to Earth,” says Vandi Verma, chief engineer of robotic operations for the mission. Along the way, Perseverance will also lay the groundwork for future human missions by studying environmental conditions, identifying resources like water and testing a method for making oxygen.

Perseverance wasn’t the only spacecraft to make the trip in 2021, either. Not long after Perseverance landed, a Chinese rover named Zhurong also touched down on Mars. Like NASA’s rover, it was designed to find evidence of ancient life and prepare for future sample retrieval. A United Arab Emirates orbiting spacecraft called Hope also arrived to make similar studies, as Earth’s space agencies took advantage of a relatively close Red Planet approach.

Perseverance builds on the legacy of its six-wheeled predecessors, which have shown that Mars was once a wet and habitable planet. Now, astronomers hope to find out whether it was ever actually inhabited. The new rover’s tantalizing landing site and advanced instruments offer the best hope yet for a conclusive answer.

The story of the landing site, Jezero Crater, starts roughly 4 billion years ago, when Mars was much warmer and wetter, and life was just taking hold on Earth. An enormous space rock struck just north of the equator and formed an impact basin some 750 miles wide. Eventually, a smaller asteroid smashed another hole in the area, churning up a unique mix of rocks and sediments.

Rivers in the region soon flowed into Jezero Crater, delivering rich sediment and creating a lake more than a quarter-mile deep and twice the width of Lake Tahoe. The wetland may have been an ideal place for life to evolve on Mars, which is why NASA chose Jezero Crater to search for signs of life. But that same geological history also carried risk to the mission.

“From an engineering standpoint, Jezero Crater was the most hazardous landing site of the five or six candidates that they picked,” says JPL engineer Andrew Johnson, who helped oversee the landing. “There’s all these heinous boulders.”

That’s why NASA made significant engineering improvements to Mars2020’s navigation systems. Newly designed systems let the spacecraft see the surface during descent, calculate its exact position and course-correct toward a tightly constrained landing site. Elsewhere, upgrades to the rover’s autonomous driving program also let the robot travel faster than ever before. On a daily basis, Perseverance will cover about as much ground as the Mars rover single-day record, about two football fields.

“We can land in terrain that would have been considered too hazardous on previous missions,” says Verma, who also drives Perseverance. “Now we can get to the scientifically interesting terrain much more quickly.”

The new rover arrived amid abundant intrigue over whether life exists on Mars today, not just in the ancient past. NASA’s Curiosity rover discovered clear signs of methane gas during its long, slow drive up 3.4-mile-tall Mount Sharp. Microbes create much of Earth’s methane, but geologic processes can make it, too. By 2018, Curiosity had repeatedly seen methane levels rise in martian summer, then drop off in winter. Yet, due to limitations in technology used to detect methane, scientists still debate its very existence on Mars.

The Curiosity rover is still active, and it continues to watch for methane. However, Perseverance is taking a more direct approach to the search for microbial action.

The rover’s life-hunting abilities come thanks to a robotic arm designed specifically to study rock surfaces, and another instrument that gives NASA an up-close look at rock textures. These instruments — dubbed SHERLOC and WATSON — are mapping minerals and organic molecules on rocks that Perseverance finds along its journey. Any interesting samples get a more in-depth analysis using the suite of instruments in the rover’s mobile lab. For example, a group of organic molecules clumped together in a rock might hint that life once existed there. Other interesting indicators of the former environment, like hints of ancient salt water, might also pique scientists’ interests.

Perseverance also doesn’t need to directly discover evidence of life. The robot is gathering surface samples all across Jezero Crater, which will eventually be studied with more sophisticated tools back on Earth, where precise dating is possible. Space agencies have sampled comets, asteroids and the moon, but no mission has ever collected surface samples from another planet.

However, depending on its timing, NASA won’t necessarily be the first to accomplish the feat. China has similar aims with its Tianwen-1 spacecraft and Zhurong rover, the first non-NASA lander to successfully operate on Mars. The rover landed in Mars’ largest impact basin, Utopia Planitia, which holds a subsurface lake larger than New Mexico. China’s space agency is searching the region for signs of life.

Engineers from NASA and the European Space Agency are already designing their “fetch” rover to speed across Jezero Crater collecting Perseverance’s samples, as well as a spacecraft to launch them into orbit. They should reach Mars in the late 2020s.

NASA also sent Perseverance with a robotic stowaway. Tucked beneath the rover was a small, solar-powered helicopter called Ingenuity. And as the rover gained its footing, mission engineers took their new drone for a series of test flights, giving humanity its first Wright brothers moment in the thin Martian air.

The helicopter was drawn up as a low-cost technology demonstrator whose prime mission was just three flights. Instead, Ingenuity drastically outperformed expectations. And when the rover set out to explore the river delta, its new drone sidekick left with it.

The scouting flights — each spanning mere minutes — quickly proved valuable, especially in terms of assessing terrain to speed the rover’s course and adding new perspectives for scientists to make sense of on-the-ground discoveries.

Now that Ingenuity has shown itself capable, mission engineers suspect the drone could become a long-term travel partner for Perseverance.

“I don’t bet against our robots,” Verma says. “I would love to see the helicopter come with us all the way to the Jezero delta, but we take it one day at a time.”