5 Things You May Not Have Known About The Dodo Bird

The dodo went extinct in 1690, but there was more to this bird than you think. 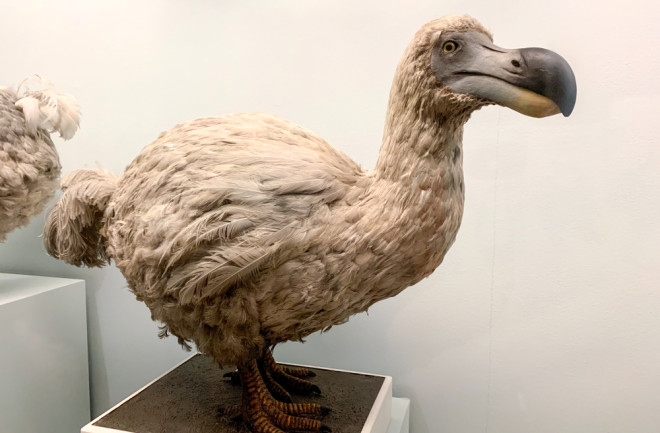 The dodo was an unusual bird. It's believed that the name "dodo" stems from the Dutch word "dodoor," meaning sluggish. However, in studying its anatomy, scientists think it could have run at fast speeds.

However, the dodo was not quick enough to outrun its doom. Living on an island with no predators, the dodo was quick to trust the human settlers that made their way to its island, which eventually caused its demise. Here are five other things you may not have known about the dodo.

Dodos lived on the Indian island of Mauritius and are descendants of Asian pigeons. Weighing about 50 pounds, it sported a big head, large hooked-tipped bill and short legs. Most notably, their wings were too short and their pectoral muscles weren't strong enough to fly. This is most likely a result of evolutionary biology.

Without the need for flight to escape predators, dodos adapted to grow larger and eliminated the ability to fly. Other birds who once flew but evolved into non-fliers include penguins and ostriches.

While many birds lay more than one egg at a time, it has been speculated from witness reports that a female dodo would lay only one egg at a time. Since they were flightless, they would build their nests on the ground and surround them with grass.

The dodo population thrived until Dutch settlements started at Mauritius in 1638. As people began inhabiting the area and killing the dodo, the population never recovered and eventually went extinct.

For many years, the dodo had all the food needed to survive and thrive on Mauritius and lived without threats. That is, as mentioned above, until a Dutch settlement arrived. Despite popular belief, settlers didn't like the taste of the dodo bird, and the dodo population decrease wasn't the result of the birds being consumed.

The animals the settlers brought with them, including rats, monkeys, dogs, sheep and pigs, were responsible for decimating the dodo population. These animals destroyed nests and ate the eggs while humans damaged the forests that the dodos lived in. The generally accepted extinction date is 1662, although, in 2013, researchers put the date as late as 1690.

Some synonyms for the word "dodo" are "ignoramus," "dummy," "moron" and "dull." But dodos were not stupid. Research shows that their brain-to-body size relationship suggests moderate intelligence levels. Dodos also had a large olfactory bulb for enhanced smelling capabilities. This is unusual among birds, who typically rely on vision.

Evolutionary biologist, Beth Shapiro, travels to remote locations seeking fossils from which to extract the DNA of long-extinct animals. Among other animals, her work has focused on the dodo. Earlier this year, she said the dodo had been completely sequenced, although results haven't yet been published. She has expressed interest in the possibility of bringing back the dodo.

"If the dodo were to be brought back, it could be restored to protected habitats on [the island nation of] Mauritius, where people could go to observe dodos in their native habitat," she says in an interview with Smithsonian Magazine.