Beheading is still practiced in some parts of the world, even though it is rare. So, do humans retain consciousness after the beheading? 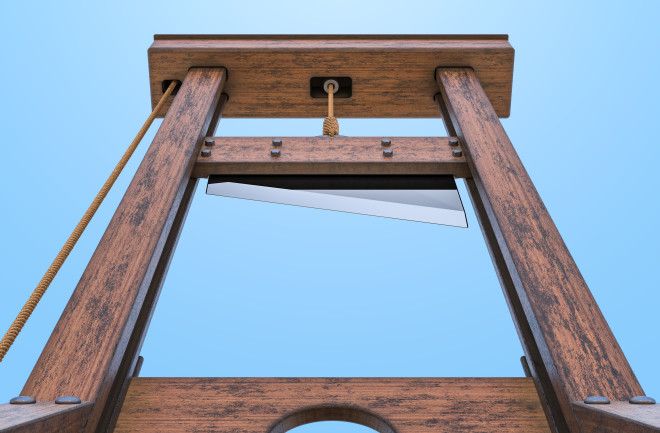 This article was originally published on October 11, 2021.

In 1536, condemned English queen Anne Boleyn knelt in a courtyard in front of an executioner’s sword and awaited the fatal blow to her neck. After the swordsman struck, he presented the severed head for witnesses to see. But Anne wasn’t ready to quit while she was a head: Onlookers later claimed that the queen’s lips were moving. Was she trying to say something?

More than two centuries later, a young French aristocrat snuck into the bathroom of a revolutionary leader and stabbed him while he soaked in the tub. The assassin, Charlotte Corday, was executed by the guillotine. Once the blade dropped, the executioner held up the severed head and then slapped each cheek as a sign of disrespect. Onlookers claimed Corday’s face flushed and she appeared enraged, as if she understood the insult.

Scientists have long wondered whether a person retains momentary consciousness after decapitation. If the severed head reacted to stimuli, does that mean the person understood their head was severed from the neck? Did they feel pain?

In 1905, a French physician sought to find out. He attended an execution and stood close to the guillotine. He approached as soon as the severed head tumbled into the basket below and called out the man’s name. He claimed the eyelids lifted and the man looked briefly at him before lowering his gaze. The physician called his name again and received a similar response. The man did not respond to a third prompt. The physician concluded based on his observations that a severed head could retain consciousness for 25 to 30 seconds.

The physician might have been correct. Studies involving animals have recorded brain activity following the sudden severing of the head. One study in New Zealand sought to understand whether there was brain activity in decapitated lab rats. In some laboratories, decapitation has long been considered the most humane way to dispose of the animal. Other laboratories use decapitation to be able to analyze chemical-free tissues, according to the study’s lead author, Kavitha Kongara, a senior lecturer in veterinary science at Massey University.

Kongara says she was motivated to study decapitation in rats after reading other studies involving consciousness of slaughtered farm animals. “These studies made us think about laboratory animals, which are killed in large numbers globally for experimental purpose,” says Kongara.

In the New Zealand study, researchers first sedated the rats, attached electroencephalograph (EEG) monitoring, and set them up in a rat-sized guillotine. After decapitation, the researchers observed activity for the first 10 to 15 seconds. Kongara described the EEG changes as “significant” and said her team attributed the activity to the rats’ cerebral cortices responding to the pain. The EEG activity was then followed by a termination of brain activity. “That means during this window, ‘decapitation’ can be perceived as painful by a conscious animal,” she says.

The study’s authors concluded that there is some form of brief consciousness in brain activity — at least in rats. But what does this mean for humans?

Kongara says we can assume that what is painful to animals is also painful to humans, although given the fatal nature of decapitation, we’ll never be able to have humans report on their experiences. “But it is possible that the severed human heads remain conscious for some time,” Kongara says.

Human decapitation is extremely rare, and even so, most likely to happen by accident in an industrial, train, or automotive accident. A study in the American Journal of Forensic Medicine and Pathology examined 170 years of references to homicidal decapitation and found only 22 instances. Similarly, decapitation is an unlikely form of suicide but could occur unintentionally during a hanging attempt. In a 2018 study, researchers examined records from 1.5 million suicidal hangings and found only three resulted in actual beheadings.

Decapitation, however, is still used by Saudi Arabia as a form of capital punishment, and it’s the only country known to do so, according to Amnesty International. Reports from Afghanistan say the Taliban is again beheading enemies such as former Afghan soldiers or translators. In October, two Islamic State suspects appeared in U.S. Federal court to face charges in their roles in the kidnapping, torture, and beheading of four American journalists and aid workers.

Although most people see beheading as a historical event that happened to troubled queens or indignant revolutionaries, it remains a current event in some parts of the world.