Death From Above: Seven Unlucky Tales of People Killed by Meteorites 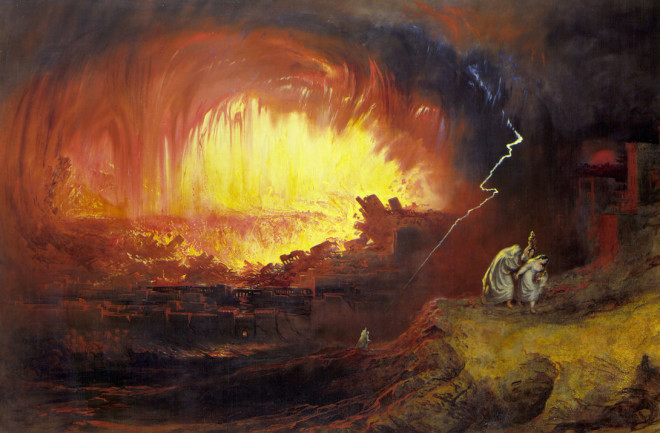 Evidence suggests that a devastating barrage of meteorites rained down on the Dead Sea city of Tall el-Hammam in what is now Jordan. And, according to some researchers who think Tall el-Hammam was the biblical city of Sodom, that scenario could explain its destruction. (Credit: John Martin/Wikimedia Commons)

When we stargaze, we bask in photons that have traveled for many millennia before reaching our eyes. To us, the stars appear fixed on a so-called celestial sphere that encapsulates our entire earthly existence.

The truth, of course, is that no such sphere exists. Instead, stars and galaxies are scattered through the cosmos at distances so great they’re incomprehensible to us.

But not all celestial phenomena exist so far away. Every day, shooting stars fail to recognize a boundary between space and Earth, dropping rocks from above — and often with dramatic results.

Our planet is vast, so meteorites typically don’t concern us. But every once in a while, these objects actually strike humans and our property. Based purely on statistics, researchers estimate that a space rock should strike a human roughly once every nine years. And with those odds, you’d expect people to get killed by meteorites fairly often.

“I do strongly suspect that stats on ‘death by asteroid’ have been severely undercounted through human history,” NASA Planetary Defense Officer Lindley Johnson told Astronomy via email. “It’s only been in the last half century or so that we’ve even realized that such a thing could happen.”

However, researchers still have not found a single confirmed case of death by space rock. But that’s not to say we haven’t come close. Modern history is full of near misses. On many occasions, space rocks have exploded over populated areas and sent thousands of meteorites raining down.

One of the most recent and well-known examples occurred in Chelyabinsk, Russia, in 2013, when a house-sized asteroid exploded over the city and injured some 1,200 people. Further back, on Jan. 30, 1868, a meteor exploded outside a town called Pultusk, near Warsaw, Poland, creating a literal meteor shower: More than 100,000 stones fell from the sky. The biggest recovered meteorite (a fragment of a space rock that makes it to the ground) weighed 20 pounds. It’s the largest meteorite fall on record.

“The citizens of Warsaw gazed, petrified with fear, on the rapid approach of an immense ball of fire, which burst over their heads with a noise and shock such as never before had been seen or heard on the surface of the Earth,” mineral expert Lewis Feuchtfanger reported at a scientific conference in 1868. If someone flew over a populated area, dropping hundreds of thousands of stones from the sky, you might expect at least one person to get hurt. Yet there are no reports of injuries from Poland on that day.

However, if ancient scholars can be trusted, humans haven’t always been so lucky. Researchers mining ancient texts in recent decades have discovered that historical records are surprisingly rich with accounts of apparent deaths due to falling space rocks. In most cases, there’s no physical evidence to confirm these stories. Yet their presence in official histories and similarities to modern accounts lead some scientists to believe at least some of the events must have really occurred.

Chinese histories in particular are rich with accounts from government scholars and astronomers that document times when “a star fell.” These records were kept consistently across many provinces and passed from dynasty to dynasty, chronicling significant events spanning thousands of years. If these documents accurately portray meteor fireballs, then somewhere between hundreds to tens of thousands of people have been killed by falling space rocks.

Here, we’ve compiled a list of some of the most compelling and captivating accounts.

The archaeological site of Tall el-Hammam in Jordan may be the biblical city of Sodom, some researchers suspect. (Credit: Wikimedia Commons)

Around 1700 B.C.: Meteor Explosion May Have Destroyed Sodom and Gomorrah

Roughly 3,700 years ago, a meteor may have exploded over the Dead Sea city of Tall el-Hammam. Located in what is now Jordan, some scientists believe Tall el-Hammam was the biblical city of Sodom. And when the blast occurred, it caused massive devastation, according to a group of Christian scientists who’ve studied the site for more than a decade. Their research was presented in 2017 at an annual meeting of The Meteoritical Society.

Archaeologists say the explosion instantly devastated hundreds of square miles north of the Dead Sea, destroying 100 percent of nearby cities and towns. The blast also may have stripped away once-fertile soils and coated agricultural lands with superheated brine ejected from the Dead Sea. Evidence of agricultural activity doesn’t return to the landscape for at least 600 years.

In its heyday, the city had enormous fortification walls and was a thriving metropolis, but its structures all appear to have crumbled due to one dramatic event. The team says they’ve found a variety of clues about what happened in Tall el-Hammam, including the instant heating of pottery shards and rocks to over 14,000 degrees Fahrenheit.

In the past, scientists have suggested Tall el-Hammam was destroyed by earthquakes or petrochemical fires, but those scenarios can’t fully explain the high heat, vast quantities of ash, or why the structures all collapsed in one direction. Only an exploding space rock could’ve caused that kind of momentary heat pulse.

If it truly was an air blast, the effect would have been like setting off an atomic bomb over the ancient city, likely killing huge numbers of people and rendering it incapable of supporting life for centuries. And, just perhaps, that scenario could explain the destruction of the biblical cities of Sodom and Gomorrah.

According to ancient official Chinese records, a large “shooting star” fell on the rebel Lu Ming-yueh’s camp in January 616, killing 10 people. An account of the event was recorded in the Book of Sui, a history of the Sui dynasty commissioned by the emperor and composed by eminent scholars of the time.

The document claims this shooting star knocked out a wall-attacking tower, or siege tower, resulting in 10 deaths. Scientists examining the account in 1994 suggested that a meteorite would need to be relatively large to have caused that kind of damage, weighing dozens or even hundreds of pounds.

The official account and a description of the fireball lend credibility to the story. However, the team also suggests the incident could have been tied to a military campaign. If so, the story we’re left with is simply a form of ancient propaganda.

Around 1341: ‘Iron Rain’ Over Yunnan Province Kills People and Animals

A group of vivid descriptions found in ancient Chinese historical documents record an “iron rain” that fell over Yunnan Province roughly 700 years ago. The accounts carry a number of different dates, ranging from 1321 to 1361, possibly as a result of copying errors in recent centuries. But researchers who studied earlier documents found that, before modern transcription, they all agreed on a date of 1341.

The descriptions of what happened come from cities and towns spread over hundreds of square miles of Yunnan Province. The local histories also carry similar language, suggesting the many witness testimonies all describe the same dramatic event. Because the fireball was seen across such a vast area, it would’ve had to have been a very large meteoroid to begin with.

“Houses and hilltops were all with bore-holes,” as a result of the iron rain, the accounts say. Astronomers think those word choices sound similar to accounts of more recent iron meteorite falls, where fragments of the parent body left tiny craters across landscapes. The documents also describe damaged crops and people’s homes left half in ruins. The histories don’t give an exact number of people who purportedly died from being hit by meteorites, but instead say “most of the people and animals struck by them were killed.”

According to numerous Chinese historical records kept by central and local governments, as well as other sources, on April 4, 1490, somewhere between 10,000 and tens of thousands of people were killed in an event that may have been caused by an asteroid exploding over the city of Ch’ing-yang (or Qingyang).

It sounds so horrific it’s hard to believe, but some of the specifics match up with other well-documented events in more recent history. The records say the stones were all different sizes, with some as big as goose eggs and weighing about 3 pounds. Others were as small as water chestnuts.

This small range of meteorite sizes doesn’t seem likely for an impact event that killed so many people, where you might expect larger stones to be the bringers of death. However, some astronomers wonder if these accounts describe a Tunguska-style airburst that leveled a city.

Whatever the cause, the accounts say the surviving residents of Ch’ing-yang all fled in the aftermath.

In a weird coincidence, Chinese, Japanese and Korean astronomers also discovered a bright comet in 1490. This comet was seen to break apart in the night sky a century later. Astronomers now know this cometary fragmentation created the annual Quadrantid meteor shower, as well as the near-Earth asteroid 2003 EH1. There’s no evidence the meteorite deaths are connected, but it’s clear Asian astronomers of the day were well aware of celestial happenings.

In 1648, two sailors were killed while at sea when a large rock crashed down from the heavens and landed on the ship’s deck, according to Capt. Olof E. Willman. The captain wrote down his account of the event nearly 20 years later, and it was eventually included in Alexander von Humboldt’s book Kosmos.

Willman claimed their ship, the Malacca, was traveling along the prominent spice trade route between Holland and the Dutch East Indies when an 8-pound rock fell from the sky. Two of his men were struck and died as a result of the impact.

Historians consider Willman’s account reliable, but in 1994 a Swedish scientist showed that there were also at least 20 hazardous and active volcanoes along their route. So it’s also possible that one of those launched a “volcanic bomb” that struck the ship.

At around 8:30 p.m. on the night of Aug. 10, 1888, a bright fireball carried a trail of smoke as it passed over villages in Iraq before exploding and raining stones on a “pyramid-shaped” hill. As a result, a man who lived in the area was killed, while another was paralyzed.

Ozan Unsalan, a planetary scientist at Ege University in Turkey, worked with a team to search for keywords like “meteorite,” “fireball” and “stones from the sky.” They found 10 documents that matched their search, including three tied to a single fireball event. They also found evidence of several additional large meteor explosions in the Ottoman Empire’s centuries’ worth of records.

The documents say rocks from the impact were sent back to the central government, but so far the team hasn’t been able to locate them in museums or archives. Soon, the scientists hope to travel to the fall path to search for meteorites that could confirm the account. If they can find physical evidence of the space rock, it would provide the first confirmation of a person being killed by a meteorite.

However, based on historical accounts, death from above seems to be nothing new.